Dr.Orji Uzor Kalu showed the promise of leadership at a very tender age. At 19, while he was a student of the University of Maiduguri, he spearheaded a riot to get the school authorities to pay more attention to the welfare of the students. For his efforts he was rusticated and he found himself in the cold and cruel world without anything to fall back on.

Rather than brood or go into depression, he looked inwards and decided to put his business skills into profitable use. Armed with a $35 loan from his mother, he went into the trading of palm oil and made a fortune in it as it made him a millionaire the following year. He later became the Chairman of the Borno Water Corporation and the Cooperative and Commerce Bank before his 30th birthday – He had truly arrived to use the Nigerian English parlance.

He delved into partisan politics in 1991 when the government of General Ibrahim Badamosi Babangida lifted the ban on political activities. He was elected into the Federal House of Representatives at the tender age of thirty-one – an age when some of his peers were still thinking of what to do with their lives.

The death of General Sani Abacha made it possible for democracy to return to the nation and he became the Governor of Abia State in 1999 – one of the country’s youngest at just thirty-nine.

His brush with the Economic and Financial Crimes Commission (EFCC) started in 2007 the year he left office. He was released on bail shortly after and blamed the former President Olusegun Obasanjo for his travails. He went on to say that Baba Iyabo as the latter is fondly called was an ingrate as he was part of the people who funded his campaign in 1999 when he was near bankrupt no thanks to his three year incarceration by the Abacha government.

He contested for the Senate thrice before he eventually defeated Senator Mao Ohuabunwa to represent Abia North in the red chambers and was made the Chief Whip of the Upper Chamber. He is a diehard supporter of President Muhammadu Buhari and was conspicuous in the electoral campaigns of the Daura born politician who is also known as Sai Baba.

The EFCC reactivated his case last year and got a conviction on the 5th of December, 2019. The Judge, Justice Idris Mohammed of the Federal High Court held that Kalu was guilty of embezzling 7.1 billion naira while he was in office as Governor for eight years.

According to a report by Premium Times: The prosecution claimed that the N7.1 billion “formed part of the funds illegally derived from the treasury of the Abia State Government and which was converted into several bank drafts before they were paid into the said company’s account.”

The prosecuting counsel, Rotimi Jacobs, said the ex-governor violated Section 17(c) of the Money Laundering (Prohibition) Act, 2004, and was liable to be punished under Section 16 of the same Act.

Apart from the N7.1bn, which he was accused of laundering, the ex-governor and the other defendants were also accused of receiving a total of N460 million allegedly stolen from the Abia State Government treasury between July and December 2002.

The prosecutor said they breached Section 427 of the Criminal Code Act, Cap 77, Laws of the Federation of Nigeria, 1990. During the trial, the prosecution called 19 witnesses while the defendants testified on behalf of themselves.

Mr Kalu was found guilty of all the 39-count charge filed against him by the EFCC.

This is rather amusing as he was the richest governor in 1999 when he assumed office. Forbes Magazine estimated his wealth at $330 million in 2015. His company, Slok, had an annual turnover running into billions of naira even before he was elected Governor. This clearly shows that greed and avarice is part and parcel of human nature otherwise he wouldn’t have misappropriated funds that he clearly didn’t need. How tragic!

He was so humiliated that he even begged the warders not to handcuff him so that he isn’t portrayed as a criminal to the public. How are the mighty fallen!

It is heart warming that his defection from the PDP to the APC didn’t prevent the EFCC from still securing his conviction. His closeness to Buhari wasn’t also a life saver for him as he was still made to face the full wrath of the law which should be no respecter of persons irrespective of status. The judiciary truly lived up to its billing as the last hope of the common man.

INEC should change their laws to prevent those standing trial in court from contesting elections. What will happen to the Abia North senatorial seat since he is now a guest of the Ikoyi prisons? Will it be declared vacant as even though he has chosen to appeal will do so from prison? Will his constituents ask for his immediate recall? Will INEC order fresh elections? These are nagging questions urgently begging for immediate answers.

For the health of our fledgling democracy, it is better those with EFCC cases are barred from contesting elections as it brings up a lot of moral baggage.

We hope that his appeal doesn’t take another 12 years and this should serve as a deterrent to the current crop of governors, that the day of reckoning is there which will determine how they will spend their lives after being in the government house.

Big thumbs up to the EFCC and the judiciary! 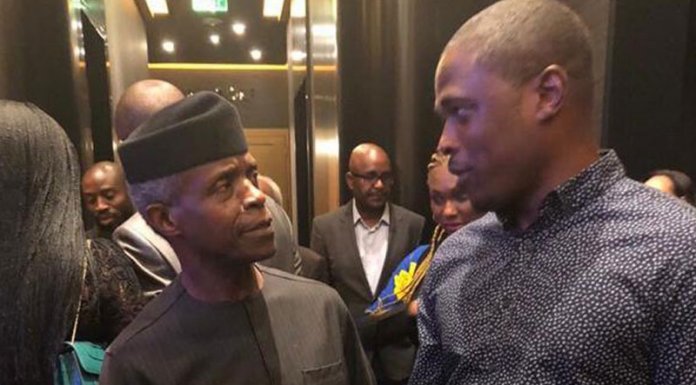