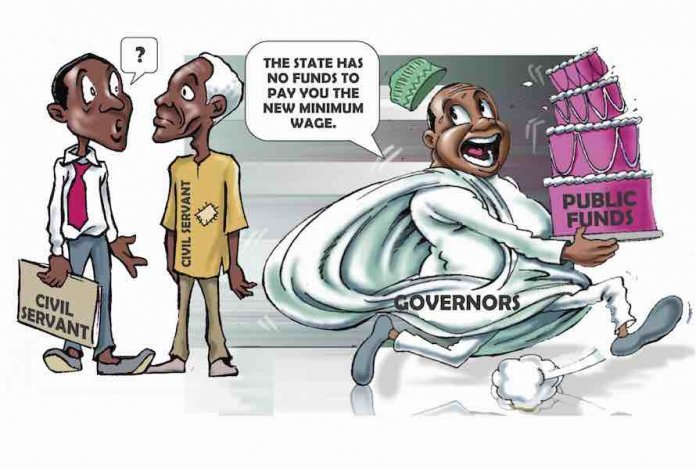 Governors must plug leakages while also being fiscally prudent

The contentious issue of minimum wage for workers dragged on for the better part of this year between the federal government and organised labour as represented by the Nigeria Labour Congress (NLC) and Trade Union Congress (TUC). At the end, the two parties agreed that the least salary a worker in the country should earn be increased from N18,000 to N30,000 effective January, 2019. With less than a month to the end of the year, there is no sign that the new minimum wage will become a reality in most of the 36 states in Nigeria.

The tardiness in handling the minimum wage issue is quite regrettable. Ab initio, the road to arriving at an acceptable wage for workers has been everything but sincere. But the greater challenge is the current perception of Nigerians about the governors who have failed to plug the leakages in their states. The ostentatious lifestyles of most governors do not offer logical persuasion to the citizens they govern that they indeed cannot pay the minimum wage. Living like modern-day emperors with little or no checks from the legislative arm, these governors have not given sufficient reasons to convince workers that the demand of N30,000 minimum wage is too much. The imbroglio created last week by the former governor of Zamfara and immediate past Chairman of the Nigeria Governors’ Forum, Abdulaziz Yari over a controversial jumbo ‘pension’ has only worsened the case for the governors.

However, there is no doubt that many of the states are facing hard times and may not be able to afford the minimum wage even with prudence in the management of their resources. Oil accounts for almost 90 per cent of the government revenues and the slump in oil price is leaving gaping hole in public finances. Indeed, more than half of the states can hardly perform routine activities, including the payment of civil servants’ salaries at the current rate. But many of the governors are to blame. Under the last set of military regime, the number of commissioners in each of the states was limited to nine. Today, some states have over 30 commissioners and as many as 500 special advisers and personal assistants. Even local government councils have speakers while the councillors have special advisers and other aides. All these are aside the large number of idle workers on the pay roll who, like leeches, feed fat on scant resources in their states.

As things stand today, our civil service is more or less reduced to a social welfare programme. Workers in some states don’t have offices while a significant number of those that go to work spend productive office hours, either gossiping or watching Nollywood and Zeeworld series. Yet the NLC, TUC and their affiliates have also refused to allow minimum wage to be taken off the exclusive list. That is because they want to have control of workers’ check off dues. Meanwhile, we query the assumption that minimum wage should be uniform across all the states, without isolating the peculiarity and operating environment of each state. We have always argued that state governments should be at liberty to reduce bloated workforce and retain only those that are productive. Also there is need to reflect on some of the cadres of workers in the civil service that are superfluous. For instance, of what value and relevance is enrolling typists on the payroll in this computer age? What is the essence of having as many as 20 drivers in a government agency that has no operational vehicles for them to drive?

The foregoing reflects some of the issues that need to be addressed but the governors must be more serious in their handling of the minimum wage issue. As at the end of November, most states were yet to constitute any committee to dialogue with the labour leaders while those that have put negotiating teams in place have not really made any progress. There is therefore the need for the remaining to give the issue the priority it deserves by ensuring that all negotiations on the issue are completed before the end of the year. While we need a drastic re-orientation that requires the federating states to live up to certain fiscal expectations, the governors cannot continue to live in luxury and yet deny workers in their states living wages.