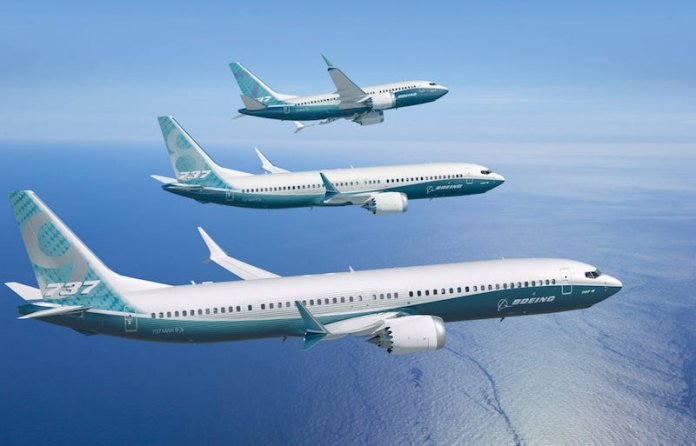 Chinedu Eze
Boeing B737 MAX is an aircraft type that held so much promise. It remains a Boeing brand that recorded highest order at introduction.

It is Boeing’s newest family of single-aisle airplanes. The 737 MAX is the fastest-selling airplane in Boeing history with about 5,000 orders from more than 100 customers worldwide.

But two tragic crashes in five months damaged the goodwill of the plane that entered service barely two years ago, so airlines will have to reassure passengers the planes are safe.

Boeing is currently struggling to put the aircraft back into the air after it was grounded due to the two tragic crashes in Indonesia and Ethiopia with 346 persons killed: 189 on Lion Air Flight 610 on October 29, 2018 and 157 on Ethiopia Airlines Flight 302 on March 10, 2019.

Boeing said its priority remains the safe return to service of the MAX and supporting “our airline customers through this challenging time. We are working closely with the FAA (US Federal Aviation Administration) and other regulatory authorities as we work towards certification and safe return to commercial service, and we are taking the time to answer all of their questions. With the rigorous scrutiny being applied, we are confident the MAX will be one of the safest airplanes ever to fly.”

US foremost aircraft manufacturing company said while the FAA and other regulatory authorities would determine the timing of certification and return to commercial service, Boeing would continue to target FAA certification of the MAX flight control software updates during this quarter of 2019.

“Based on this schedule, it is possible that the resumption of MAX deliveries to airline customers could begin in December, after certification, when the FAA issues an Airworthiness Directive rescinding the grounding order. In parallel, we are working towards final validation of the updated training requirements, which must occur before the MAX returns to commercial service, and which we now expect to begin in January.”

THISDAY learnt that there are five key milestones Boeing must complete with the FAA before return to service. These include FAA eCab Simulator Certification Session: A multi-day eCab simulator evaluation with the FAA to ensure the overall software system performs its intended function, both normally and in the presence of system failures. Boeing said this has been completed.

Industry observers acknowledged that these are very rigorous processes that would ensure that the aircraft is safe when it returns to service.
But the challenge they noted is the apprehension of the passengers. Would travelers be willing to fly Boeing 737 MAX?

Recent report by Business Insider indicated that American Airlines flight attendants literally begged not to work on Boeing 737 MAX when it returns.

In Nigeria, Air Peace ordered 10 of the aircraft brand but like Ethiopia Airlines, which already has some of the aircraft in its fleet, the airline said that it would gain passengers confidence before it would put it in the air after delivery.

But by the time the aircraft would be due for delivery to Air Peace, it must have regained its popularity because industry insiders believe that Boeing MAX would rise to become one of the safest aircraft in the world.

At the Dubai Air Show, which ended yesterday, there were indications that confidence was coming back to the aircraft brand, as Boeing sold 60 of the airplanes in the first days of the air show.

At the Dubai Airshow, Boeing secured an order from SunExpress, a leisure-focused subsidiary of Turkish Airlines and Lufthansa, for 10 jets on Monday.
“We have full confidence that Boeing will deliver us a safe, reliable, and efficient aircraft,” Sun Express CEO Jens Bischof said.

Ethiopia Airlines Chief Executive Officer, Tewolde Gebremariam said after Boeing 737 MAX has been re-certificated and returned to the air, Ethiopia would fly the aircraft again, after many other airlines have put it in the air.

QUOTE:
We are working towards final validation of the updated training requirements, which must occur before the MAX returns to commercial service, and which we now expect to begin in January