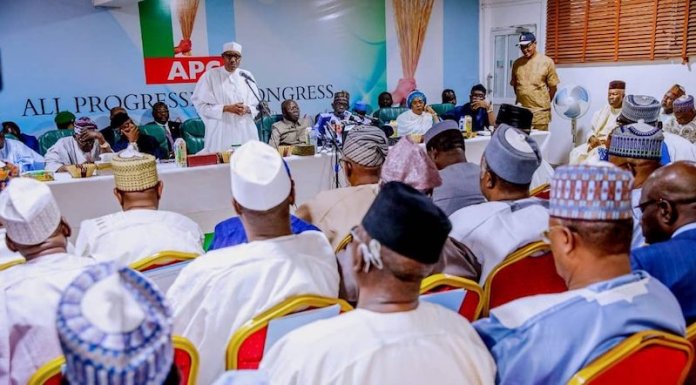 Fifteen months after the All Progressives Congress (APC) last held its National Executive Committee (NEC), the ruling party’s NEC will meet on Friday to deliberate on internal crisis, suspension of members of the National Working Committee (NWC), as well as filling of vacant NWC positions.

The Director General of Progressives Governors Forum (PGF), Dr. Salihu Lukman, had last week demanded that the National Chairman, Mr. Adams Oshiomhole, should convene the statutory NEC meeting to resolve some of the lingering crises in the party or resign from office.

It was gathered that the NWC meeting held yesterday deliberated on the just-concluded governorship elections held in both Kogi and Bayelsa states, as well as the Kogi West senatorial election rerun.

Though, there was no official statement from the party at the end of the meeting, THISDAY gathered that the party would hold its caucus meeting at the Presidential Villa on Thursday ahead of the NEC meeting on Friday.

According to a source privy to the meeting, the issues that would be discussed on Friday would be how to fill the vacant positions like National Auditor, a position held by Mr. George Moghalu, who was recently appointed as the Managing Director, National Inland Waterways Authority (NIWA); Deputy Vice Chairman, South, a position held by Chief Niyi Adebayo, who was also appointed as the Minister of Industry, Trade and Investment; and the position of National Secretary, which was previously held by Mr. Mai Mala Buni, the Yobe State governor.

THISDAY also gathered that the ongoing crisis in Edo State chapter of the party that has pitted Oshiomhole against the governor, Mr. Godwin Obaseki, would equally be discussed.

A statement issued yesterday by Lukman, said Bello’s victory at the poll was a testament to his faith and that once more providence has bestowed on him this historic victory as the winner of the November I6 governorship election.

The governors assured their colleague that the PGF secretariat was committed to continue working closely with him and his team as he takes his state to the next level through rapid development and reforms.