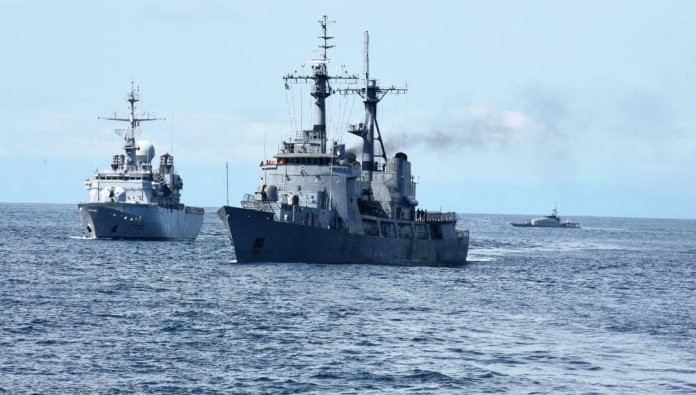 Chinecherem Ojiako writes that as part of ongoing  efforts to counter piracy, crude oil theft and other maritime crimes in the Gulf of Guinea, the Nigerian Navy recently partnered its French counterpart, other international and regional navies on Exercise Grand African NEMO
Worldwide, the sea has been a major pathway for trading, contributing to global economy and advancement of human living.  However,the maintenance of our economy as it concerns maritime activities has been threatened over the years by criminal activities within the maritime domain.
However, following the rise of criminal activities,  the Yaoundé Declaration on the Gulf of Guinea security was borne on June 2013, in a bid to counter piracy and other illegal activities in the West and Central African sub regions. The declaration clearly spelt out two key resolutions that were to be met- firstly, the  creation of an inter-regional coordination center on maritime  safety and security for West and Central Africa to be headquartered in Yaoundé Cameroun and secondly, the implementation of a new code of conduct on the prevention and repression of piracy, armed robbery against ships and illegal maritime activities in West and Central Africa.
It would be pertinent to state also that the Yaoundé Declaration on the Gulf of Guinea (GoG) Security, in which countries like Togo, Benin Republic, Ghana, Nigeria, Cameroon, Equatorial Guinea, Gabon, Sao Tome and Principe, Angola and Congo, that border the GoG wasters, mandates maritime collaboration to strengthen the territorial integrity and security of member nations.
Subsequently, several inter-regional maritime exercises had been held to improve the cooperation among regional navies in West and Central Africa. One of such is the Exercise GRAND AFRICAN NEMO, which is aimed at supporting the efforts made by regional navies and allied nations.
Exercise Grand African NEMO
The Grand African NEMO is an annual exercise aimed at supporting the efforts of regional navies to counter criminal activities in the maritime domain through different operational modes of planned exercises. This year, alongside the Nigerian Navy (NN),the exercise was coordinated by the French Navy together with other international and regional navies.
For the NN, the conduct of this year’s exercise was to facilitate the involvement of various key ministries and departments, including  the respective Ministries of Justice, Finance, and Agriculture, as well as Department of Fishery, which provided opportunities for inter agency cooperation among major stakeholders in maritime sector for enhanced security.
Thus, to counter piracy, crude oil theft, and other maritime crimes, the NN in collaboration with its French counterpart and other regional and international navies recently held Exercise Grand African NEMO 2019. During the five-days exercise, the participating navies conducted anti-piracy, anti-crude oil theft (COT), visit board search and seizure (VBSS), search and rescue, and anti-poaching drills operations.
Without gainsaying, the security of Nigerian territorial waters is now a global concern due to growing activities of pirates in the GoG, hence the increased collaboration between the NN, continental and global navies to deny pirates and other sea criminals freedom of action in order to engender smooth navigation by mariners who drives the international trade.

For the exercise, the NN deployed four ships and one helicopter to carry out various naval drills and tactical manoeuvers, as well as other simulated exercises. The exercise kicked off with a flag-off ceremony onboard NNS THUNDER (one of the deployed NN warships). During the flag-off, the Flag Officer Commanding (FOC), Central Naval Command (CNC), Rear Admiral Suleiman Garba, stressed on the aims and objectives of the exercise.

According to Garba, the concept of the exercise was to operationalise some of the arguments that have been agreed upon by countries in the GoG.
Specifically, he said the exercise also tries to achieve the aims of the Yaoundé declaration adopted in June 2013,  which ensures  that countries of the GoG are able to exchange information regarding maritime crimes and security in the entire region.
Garba further noted that the exercise will also enable the NN practice some of the evolutions required at sea to counter all sorts of maritime illegalities. He noted that sequel to the Yaoundé declaration, several inter-regional maritime exercise have been held to improve cooperation among regional navies in West and Central Africa.
This he said is in recognition of the trans-national nature of maritime insecurity, which requires trans-border cooperation between all users of the common, to mitigate illicit maritime activities the world over.
He said: “The exercise ‘GRAND AFRICAN NEMO2019’ is one which is aimed at supporting the efforts made by regional navies and allied nations. Today, the NN is deploying four ships and one helicopter for the exercise to carry out various naval drills together with other foreign ships within Nigeria waters which is in line with strategic directives of the Chief of the Naval Staff, Vice Admiral Ibok-Ette Ekwe Ibas, to end crude oil theft and other economic sabotages in the nation’s maritime environment through enhanced patrol and operations.”
Regarding other agencies partaking in the exercise he said: “As you are aware,  the NN is not a prosecuting agency and that is why we have on board today such agencies as the customs and immigration. Also the Department of Fisheries and particularly the Ministry of Justice officials, who are here to ensure that the process of collection of evidence, which will lead to prosecution, are properly followed in other to ensure that all criminals that are involved in maritime criminalities are properly prosecuted and put off for good.”
In his closing remark, Garba said the take home for this exercise has always been the navy’s ability to coordinate and cooperate with its  international partners, adding that the exercise enables them to communicate real time between countries, not only for criminalities, but also for the movement of legitimate vessels within our waters.
Exercises at Sea
At sea, various exercises were carried out in tandem with the goals and objectives set out. One of such was the VBSS Operation. It involved the deployment of boats with the NN Special Boat Service (SBS). They were to invade the surrogate French ship, FNS Somme ( French Logistic ship), pre positioned as an adversary ship. The French ship served as both fishing trawler and a pirate ship along the Pennington and Ayala oil fields at the Exclusive Economic Zones (EEZ) of Nigerian waters.
While the exercise was still ongoing, a simulated illegal fishing trawler was spotted within the Pennington region, and the SBS team was deployed to immediately go after them. The VBSS Operation was carried out on them, and after interrogation, six crew members from Somalia were arrested, while two French hostages were released. Recovered also from the bandits, were four dummy pistols and four knives. They were subsequently handed over to the naval police.
The third day, the VBSS operation and Fleet Manoeuvering happened. This time around, the VBSS operation continued with the SBS on board FNS Germinal ( French warship) while the fleet  manoeuvering was conducted within the Pennington and Ayala oil fields. The exercise was designed to ascertain the operational ability of the force on ground and combat readiness for battle. The exercise involved 4 ships namely; NNS THUNDER, NNS OKPABANA, NNS DORINA and  FNS GERMINAL (a French warship). The relative positions of the ships were observed to ascertain their strategic combat readiness in order to exert maximum impact on their adversaries during battle.
The French Connection
Speaking on the essence of the exercise to the collaborating countries, the Commanding Officer (CO) of the French Naval ship, FNS Germinal, Captain  Paul Herouville said: “This exercise called GRAND AFRICAN NEMO is organised by France and it takes place every year. The aim is to gather all the navies in the GoG to train and work together to improve maritime security. We know there are lots of challenges here such as piracy, illegal fishing, drug trafficking etc, thus we need to train together and share our experience to improve maritime security.
“The theme, Grand African NEMO, is centered on illegal fishing, drug trafficking, and other sea related crimes. We proposed a scenario to help to work together to see how they train and vise versa, and to learn from each other and improve the ability of both navies to work. Also, we want all the navies to work together and share their experiences as it concerns maritime security.”
When asked what France’s interest was, he simply said he was there as a captain of the ship, so he would not speak on that, although he added that “the interest is to share experience that we have, because we have a lot of historical ties with the navies here at the gulf of guinea”.
The five days exercise culminated in a debriefing for the review and assessment of conduct of the exercise in order to improve future exercises, and perfect strategies at tackling maritime crimes.