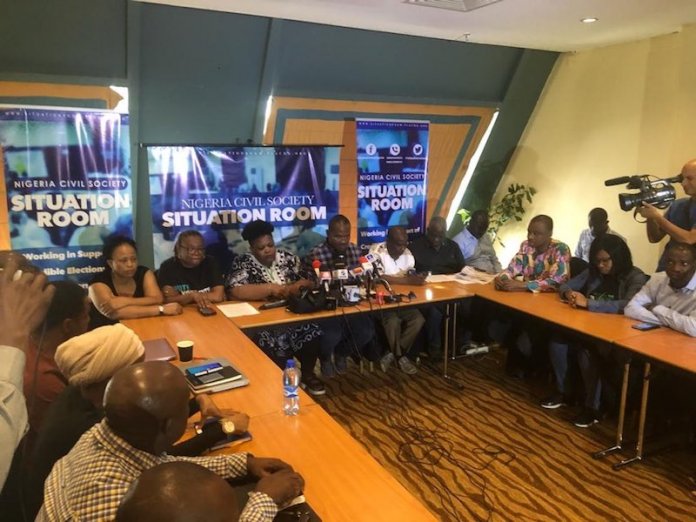 It said the call was necessitated by high levels of violence and electoral malpractices that characterized the election in the state.

The Situation Room also expressed disappointment with the conduct of the governorship election in Bayelsa State which it said fell below standards.

In its preliminary report on the assessment of the Saturday’s elections in Bayelsa and Kogi States, the civil society coalition called for serious investigation on alleged cases of vote buying, involvement of security personnel in vote snatching and other forms security breeches.

Addressing a press conference in Abuja on the conduct of the Bayelsa and Kogi elections, the Convener of the Civil Society Situation Room, Mr. Clement Nwankwo, described the elections as a great setback to Nigeria’s electoral democracy.

“With particular reference to the elections in Kogi State, the level of violence perpetrated by the two major political parties and politicians, evident sometimes in the collusion with security personnel, seriously undermined the elections, deterred voters and made the exercise a farce.

“Accordingly, Situation Room is calling for the cancellation of the entirety of the Kogi State elections conducted on Saturday, November 16, 2019,” he said.

He said the Kogi elections represent a major dent on Nigeria’s democratic process.

While presenting the preliminary report of the group, Nwankwo said its observers recounted incidents where security personnel deployed to monitor the election stood by watching thugs snatching ballot boxes, unleashing violence and disrupting the electoral process in Kogi State.

Speaking on the conduct of the election in Bayelsa State, Nwankwo said there were serious lapses with high level violence perpetrated by political parties in collusion with security personnel.

Situation Room said in the light of security failures, violence, thuggery and general abuse witnessed in the elections, there is an urgent need for the passage and implementation of an Electoral Offences Commission law to address the issues related to electoral abuse.