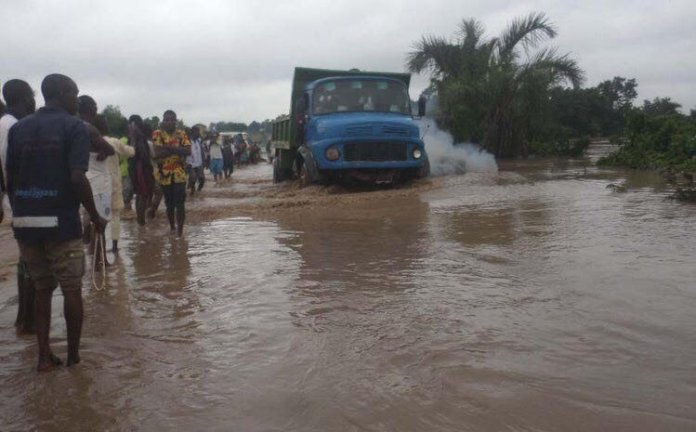 Cameroonians have continued to make quick money from Nigerians fleeing from flooded town of Rann in Kala-Balge Local Government Area of Borno State.

Source said N5,000 was charged per individual to have a boat ride over the flooded area into dry land in Nigeria.

The fleeing residents of Rann, are given a boat ride through part of Cameroon into Gamboru, a Nigerian border town before proceeding to Ngala, where a camp accommodates internally displaced persons.

A member of the House of Representatives from the area, Hon. Zainab Gimba had drawn the attention of the public to the flood in Rann, claiming that due to heavy rainfalls and the overflow of River Kaalia in the Republic of Cameroun, Rann town was severely flooded, resulting in the destruction of the Internally Displaced Persons (IDP) camp in Kala Balge.

She also said the flood had submerged more than 4,000 hectares of farmlands and flooded all access roads to Rann, leaving almost 100,000 people including women and children trapped without food, shelter and other basic necessities of life; Gimba had also complained on the floor of the House that due to the floods the IDPs had also been rendered homeless and left with relocation challenges as other IDP camps nearby were either overpopulated or suffering from flooding issues as well.

She had also lamented that the displaced persons were in dire straits as the situation had left them exposed and vulnerable to attacks and epidemics;

Further worried that the people of Kala Balge are unable to get adequate help as the road linking it with other parts of Borno State has been destroyed by the floods, making Rann town inaccessible by road.

A check by THISDAY showed that the population of Rann may not be up to 100,000 as claimed by the lawmaker as the International Organisation for Migration (IOM)’s Displacement Tracking Matrix (DTM) Round 25 October 2018 showed that the town was populated by 67,000.

This figure has further reduced as a result attacks late last year and early this year that have led many people fleeing the town.

A report by UN Office for the Coordination of Humanitarian Affairs published on 28 February 2019 showed that the town had just over 40,000 persons.

The present floodings have left many without food as the last general food distribution by Humanitarian agencies to the town was in May, 2019 and nearly all farmlands have been destroyed by the ongoing challenges

Sources from Humanitarian sector in Borno showed that many people were still stranded in Rann as only 375 persons, mostly from Rann, were registered at the IDPs camp in Ngala.

The food situation of Rann, may not get better fast as Humanitarian actors found it difficult to get into the town with the road flooded and no passage on land but only through the air.

A source in the Humanitarian community in Borno, told us that Humanitarian agencies were still battling with challenges of how to get food into the town.

The source said: “Even if we are to get into Rann, it may have to be next week for we are handicapped by logistics.