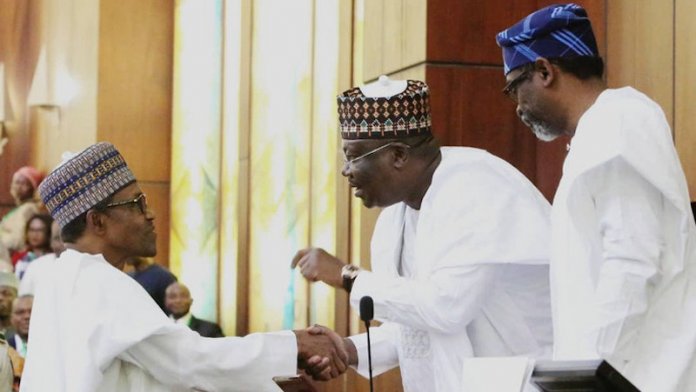 In his condolence message, Buhari expressed deep sorrow at the passage of his ally and friend, a man he usually called “the indomitable Tam David-West.”

According to a statement by one of the presidential spokesmen, Mr. Femi Adesina, the late David-West was a consultant virologist of national and international standing. He served as Commissioner of Education in the old Rivers State, Minister of Petroleum and Energy under the Muhammadu Buhari military regime, and Minister of Mines, Power and Steel under Gen. Ibrahim Babangida regime.

“He had an indomitable spirit, stood resolutely by whatever he believed in, and was in a class of his own,” the president said of the academic, author of many books and social critic.
He commiserated with the David-West family, the people of Buguma, Kalabari Kingdom of Rivers State, the academia, and all those who loved “the forthright Tam David-West.”

“President Buhari prays that God will rest the soul of the committed nationalist, urging all those who believe in the ideals he espoused to approximate same, for the betterment of Nigeria and humanity in general,” he added.
Lawan said David-West contributed immensely to the development of Nigeria as a teacher and political office holder.

“Professor David-West was a vocal social critic who lived what he preached and never compromised his principles all through his lifetime.
Lawan said Prof. David-West would be missed for his deep and frank analysis of social challenges.
“Aside from pointing directions from the ivory tower, when the calls came for him to serve at the highest level of government, he discharged his duties diligently and conscientiously,” the Senate president said.

Lawan condoled with his family, the government and people of Rivers State and prayed that God will give them the fortitude to bear the great loss.
Omo-Agege described the death of the former minister as a big loss to the nation.
He said with his demise, Nigeria would miss his wealth of experience especially in this period of the nation’s political history.

Omo-Agege, in a statement by his Media Adviser, Yomi Odunuga, stressed that with his transition to the great beyond, David-West would forever be remembered as a great patriot and intellectual of formidable standing at home and abroad.

He noted that he was one of those who truly left an indelible footprint on the sands of time.
“While we mourn, we must appreciate the noble essence of his time on earth as an idealist who consistently nursed an optimistic outlook about Nigeria’s capacity for genuine transformation,” he said.
Also, Wike commiserated with the family of David-West over his passing.

In a statement issued in Port Harcourt, Wike said the death of late Professor David-West is a huge loss to the people of the state.
“Prof. David-West was an accomplished academician who served the country well in various capacities,” he said.

He prayed that God would grant his soul eternal rest and the family the fortitude to bear the loss.
The APC, through its National Publicity Secretary, Mallam Lanre Issa-Onilu, in a statement yesterday lamented that Nigeria had lost a progressive voice and social critic who spoke truth to power.
He said the late David-West always held leaders to account on issues of good governance.

“We recall his strong advocacy for oil sector reforms, particularly the passage of a mutually-beneficial Petroleum Industry Bill (PIB), fixing moribund refineries and ending the fuel subsidy racket that was a drain-pipe on the country’s resources before the advent of President Muhammadu Buhari administration.

“While the death of the late patriot is painful and a sad loss, we take solace in the fact that he lived an accomplished and impactful life. In death, we remember and celebrate a man who served the country diligently and championed the cause of the poor and underprivileged,” APC said.