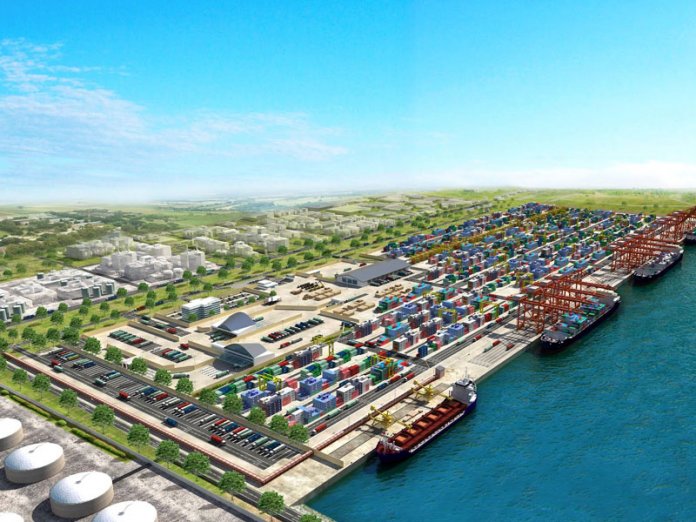 Recently, Lagos State governor, Mr. Babajide Olusola Sanwo-Olu, signed the $629 million financing facility aimed at completing the Lekki Deep Seaport project. According to the agreement, in 30 months, Nigeria’s first deep seaport will be delivered. The signing of the agreement has, no doubt, put to rest all kinds of reservations concerning the speedy delivery of the seaport venture.

Upon completion, the project has enormous capacity not only to stimulate the Lagos economy, but equally to push it up in the index of largest economies in the world. The Lekki port would become the first deep seaport in Nigeria and the container transportation hub in Africa.

The signing of the $629 million financing facility thus offers a new impetus for socio-economic growth in the state. It also represents the dawn of a new era in the state government’s ambitious plan to transform the Lekki corridor into a new economic hub.

The securing of the loan deal with China Harbour Engineering Company (CHEC) is a reflection of the current administration’s plan to explore investments and partnerships that would accelerate growth and benefit residents of the state. The Sanwo-Olu administration is resolutely committed to a private sector -driven economy where the sector sets agenda, make things happen and probably drive the public sector. It is this strong belief in private sector ability that eggs it on to collaborate with the members of the Organized Private Sector (OPS) in various vital areas in order to achieve our THEME Agenda

Upon completion, the deep seaport would have two container berths of 680-metre long and 16.5-metre water depth. It will also have the capacity to berth fifth generation container ships, which has a capacity of 18,000 TEU ship.

The channel would be dredged to 14 meters depth, which would be deepened to 19 meters as traffic grows while the breakwater, which protects the vessels from the waves, is 1.5 kilometers long. The project is strategic for the economic growth of Lekki Free Zone, as it would support the massive industrial and petrochemical complex being embarked on in the Northern and Southern quadrant of the zone with investment over the next three years peaking at over $20 billion.

With Lekki Airport in view, there will be an emergence of a Harbour City which would be internationally connected by air and also with world-class integrated transport network of roads, rail and bridges.

Undoubtedly, the development of the seaport is strategic to the growth of Lekki Free Trade Zone. The project, which is projected to make immense impact on the nation’s economy, is capable of creating more than 200,000 jobs and generating about $350 billion in revenue for the state over the period of the concession.

According to plan, the phase one of the project would be built with annual handling capacity of 1.2 million TEU, which would be increased to 2.5 million TEU upon the completion of the second phase.

Till date and for various reasons, efforts to develop Deep Sea ports in Nigeria have not experienced any significant outcome.
The Deep Sea ports were visualized to develop the general cargo handling capability of Nigerian ports with a view to enhancing Nigeria’s gross domestic product (GDP).

According to experts, out of over 100 seaport development projects being executed in the world, approximately 60 to 75 per cent of these are deep sea ports or terminals. The balance is mostly inland waterway ports and Jetties.

This evidently shows that Nigeria needs better designed port facilities in tune with increased cargo traffic, for the country to be globally competitive. Demand for containers in Nigeria is anticipated to grow at 12.9 per cent up to 2025.
The strategic location, optimized layout, and modern facilities provide Lekki Port a distinct competitive edge over any other port facility in the West Africa region.

Considering Lagos phenomenal population growth rate, it is obvious that more innovative initiatives are required to tackle poverty and unemployment headlong. This has made the necessity of the Lekki Deep Sea Port that will serve as an alternative to the existing ports in the state a compelling one.

Undoubtedly, vast gain would stem from the project as it is particularly anticipated to make life more comfortable for Lagosians and, indeed, all Nigerians. According to Governor Sanwo-Olu, the significance of the project will be entirely treasured when it is imagined what the Lagos of today would have looked like without the Lekki corridor. Aside improving the quality of life of the people, the Lekki Deep Sea Port would also be a big asset that would be handed to the Lagos State Government at the end of the concession arrangement.

The LFTZ is another strategic conception of the Lagos State government towards the economic emancipation of the country’s ‘Center of Excellence’.

It was launched in 2004 as a vehicle to fully utilize the investment and tourism potential of the state. The zone is a multi-use facility with zones for industry, manufacturing, residential and tourism. Investors have the incentive to retain 100% ownership and capital, profit and dividends can be repatriated. Tax holidays, license waivers and various other concessions and advantages apply to investors in the LFTZ.

As against the over dependence of many states in the country on federal allocation as major source of revenue, Lagos is practically extending her frontiers of wealth creation by providing basic infrastructure capable of driving the LFTZ to generate further wealth for the state and, indeed, the country as a whole.

By the time current efforts of the state government and her partners to transform the zone into a huge economically thriving focal point, the state and its residents would be the better for it.

Ogunbiyi is of the Lagos State Ministry of Information & Strategy, Alausa, Ikeja