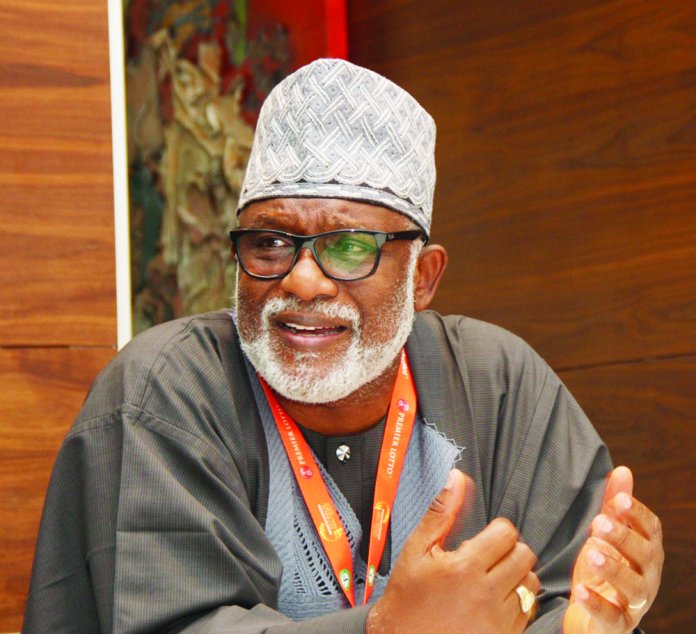 James Sowole reports that effort of the Ondo State Governor, Mr. Oluwarotimi Akeredolu, to increase IGR has led to an increase in money available to the state for infrastructural development

The recent recession caused by the drastic fall in the crude oil prices in the international market and which affected Nigeria’s earning with the subsequent ugly effects on the money available for sharing to states from Federation Account, was what made many governors to realise the need to look inward to generate more revenue on their own.

The drastic reduction in the money shared to states led to non- payment of salary to many state workers with some states accruing up to one year salary arrears which compelled many to resort to borrowing of all sorts despite bailout by the Federal Government.

Facts have emerged that states were not generating the required IGR not because there were no avenues or sources to generate, but efforts were hampered by the lack of political will, lack of required manpower and various forms of leakages.

Ondo State also known as Sunshine State has experienced its own share of the recession and poor revenue, which led to accumulation of seven months salary arrears when the incumbent governor, Mr Oluwarotimi Akeredolu SAN, was sworn in on February 24, 2017.

Akeredolu on assumption of office therefore declared  that a lot needed to be done to increase state’s IGR, which was reported to be at paltry N700 million monthly on the average.

The governor then declared that the state Board of Internal Revenue must be reorganised and reinvigorated to shore up the state’s IGR which would be plough back into the state’s economy.

The efforts of the Akeredolu’s administration  had not only resulted in increasing revenue drive, it had put the Sunshine State in the group of states that had achieved more than the double of amount they use to realise before this time.

The IGR of the Sunshine State has moved from about N10.2b in 2017 to N24.8billion in 2018.  This leap jump in the IGR of the State pushed the state ranking from 20th to 9th states with the highest IGR in 2018 and first  in terms of annual growth according to the Joint Tax Board (JTB) and the Nigerian Bureau of Statistics (NBS).

As at half year, a recent analysis on Channels Television shows the state is Number two after Rivers State in terms of year on year quantum growth in IGR for the first half of 2019

To further keep the tempo on the ascendancy,  Akeredolu has approved all proposals encouraging deployment of ICT values into Tax collections in the state.

Besides this, the implementation of the state Land Use Charge Law 2014 has been made friendlier, with the employment of over 400 revenue officers to drive the scheme while the hitherto Ondo State Board of Internal Revenue has been granted autonomy in operations and functions. A new head office is also being built to house the ODIRS to make the task of revenue collections easy and the current performance sustainable.

The result of the initiative of the government was revealed recently by the National Bureau of Statistics (NBS) in its six months (Jan-June 2019) report, which put the state IGR at N19 billion and which put the state among the 10 states with highest revenue during the period.

This feat of the state in the IGR had been generating reactions and accolades from various stakeholders.

The member representing Owo/Ose Federal Constituency of Ondo State in the National Assembly, Otunba Timehin Adelegbe has commended the Akeredolu led Government for the current strides in IGR generation.

Adelegbe,  a banker and economist, was a former Commissioner for Commerce in the Sunshine State before he contested  March 9, 2019 Election that took him to the House of Representatives. He said: “It was worthy of note that Ondo State generated a whopping N19billion of the total N691.11billion  generated by the 36 states and the FCT inclusive in the first half of the year.”

Adelegbe, a member of the House of Representatives Committee on Budget and Appropriations specifically commended efforts of Akeredolu  in revamping the state agencies directly involved in generating revenues, especially the Ondo State Internal Revenue Service under the chairmanship of Mr .Tolu Adegbie.

The lawmaker commended Adegbie for his brilliance and for bringing his wealth of experience gathered in the banking sector to bare and moving the half yearly performance from average of N5billion in 2016 and 2017 to N9billion in 2018 and astronomical N19billion in 2019.

Adelegbe stated that it was not surprising that residents of Ondo State were not finding it too difficult to pay their taxes, considering the quantum and massive infrastructural developments being witnessed in the state, especially road rehabilitations and constructions.

“The quality and quantities of infrastructures so far delivered across Ondo State by the present administration,  has continued to marvel most of the citizens. This is sequel to the fact that cash inflow to the state treasury from the Federation Account is now far less than what some of the past administrations received and yet not much infrastructures were delivered for the comfort of the citizens to justify the greater resources that accrued to the state.

“The prudent husbandry of state resources coupled with careful re-engineering of the state internally generated revenue mechanism, the Oluwarotimi Akeredolu Administration has given good governance another rhythm to cheer”, Adelegbe said.

He added that the present up shoot in the IGR of the state was a big plus  in the sense that it has empowered the state to meet its recurrent expenditure without stress, which has resulted in the regular payment of workers’ salaries and embarking on capital projects in major parts of the state.

He specifically cited some roads being constructed and rehabilitated within the state like Iwalewa Road, High Court Road, Oke Ogba and others in Akure metropolis, Sabomi Road in Ese Odo, Opasorun Road, Bajare/Okemayo, St. Joseph Road in Idanre, three box culverts at Oyinmomo Ishakunmi Road in Ikare, the 2.3km Ogbomo Ifedara, Ajegunle Streets and Howlet Road, Ifon, completion of dualized township road in Owo, construction of dualised township road in Ikare Akoko construction of Ijoka-Idanre road among many others.

“There is virtually no part of the state which is not witnessing one construction or the other. Most significantly is the Ore Fly-Over (Inter Change Bridge) in Odigbo Local Government area, which is even a federal government road. The alarming rate of accidents on this road that has claimed several lives in the past made the governor to place priority on the project to safe lives and promote free traffic” Adelegbe stated.

As a businessman, Adelegbe said the current astronomical increase in the state IGR and infrastructural developments status of the state would encourage more investors to partner with the state. He charged the people of the state to give unalloyed and unflinching supports for the second term ambition of  Akeredolu so that the people oriented servant leader can continue to attract and bring more benefits to the state, while promising to contribute his quota in terms of strong collaboration with the governor in moving the state forward.