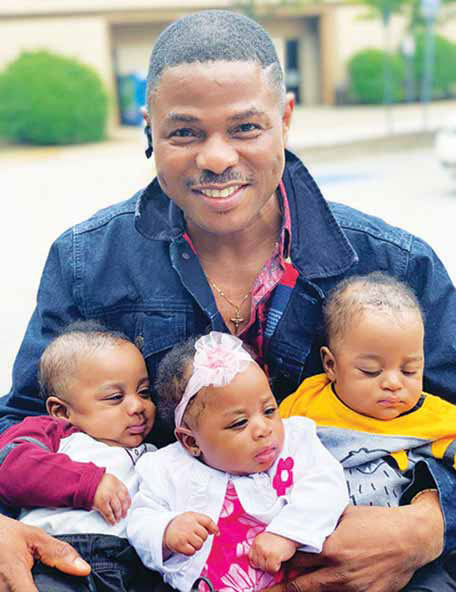 On Sunday, November 3, renowned gospel singer Yinka Ayefele will be dedicating his triplets in a private ceremony in Ibadan, Oyo state. The news of their birth have been shrouded in secrecy, Vanessa Obioha encountered the artiste recently who explained his actions

Yinka Ayefele is a happy man. He has every reason to be. In June, the news of the birth of  his triplets reverberated around the country and was welcomed with joy.  That euphoric feeling is seen in his disposition this sunny afternoon in his office in Ibadan. The way he talks about his triplets, sometimes expressing unspeakable joy, other times displaying disbelief as if he is still in a dream. The peculiarity of his situation is one that leaves one in awe of the wonders of the  Supreme God. Known as the inventor of ‘Tungba’ genre, Ayefele’s life story is one that’s filled with more thanksgiving than regret. He was involved in  an accident over two decades ago that resulted in a spinal cord injury and confined him to a wheelchair.

That incident nearly shredded his lofty life ambition into pieces. A passionate musician and broadcaster,  Ayefele harboured the dream of attaining more heights. At the time of the accident, everything seemed gloomy and not a few imagined the worst for him.  But somehow, Ayefele was able to turn his misfortunes around, accumulating an enviable wealth that made many wish they were in his shoes, despite the constraints of movement he suffers. He revealed that he is constantly in pain and the only way to numb the pain was to be active 24 hours.   He is currently the owner of the Ibadan-based radio station Fresh FM. Gradually, Ayefele is spreading the tentacles of the radio stations to other South-western states such as Ogun and Ekiti States.

Going by the degree of his accident, not a few doubted that he would have his own progeny. But with his resilient spirit and the love and understanding of his wife, Tope whom he met before the accident, a miracle came knocking last year, and the couple gladly answered.

Yet, when his bundle of joy arrived, Ayefele was too scared to share the good news with the world.

There are speculations surrounding the birth of your children. When exactly were they born?

My bundles of joy arrived on January 18, 2019. They are triplets and were delivered at the Holy Cross Hospital in the United States. I have been praying for the miracle of a child  after so many years of childlessness. I give glory to God that it is a great surprise. I was hoping for one but God surprised me with three. I have two boys and a girl.

But it wasn’t until June that people knew you had triplets, why the secrecy?

It was deliberate. I even denied it once. When it happened, the news somehow got out and a lot of people were talking about it but I denied it because those babies were born premature. And I was scared because I didn’t want to lose these babies after the long wait. Yorubas also believe that if you are loud about such news that anything can happen so I didn’t want to reveal anything about them until they are fully grown. But my pastor encouraged me, she told me that the Lord who gave me these children will surely keep them, that I shouldn’t deny them. She encouraged me to testify of the Lord’s doing in my life. That was why I came out to talk about it. But I was initially afraid of how they look, they were very tiny.

How were you able to conceal the news being that you are in the spotlight and have many people working for you?

It was not easy. I have to befriend some people to keep them from revealing it. Some of my colleagues in the media industry knew about it but I asked them not to talk about it yet. I also ensured that none of their pictures were released until recently.

Could you take us through the emotions you experienced when the children arrived?

I went through different emotions at different stages. Each moment was terrific. Right from the eighth day we did the pregnancy test and discovered it was positive, I nearly ran mad. I couldn’t believe that it could happen after a series of attempts. I don’t know how to explain the way I feel. But that night she gave birth to them, it became more real. I have been monitoring their growth right from the womb. I accompany my wife to the scan tests. That night, I fully welcomed them.

Has anything changed since the children arrived?

People around me can attest to that question. Things have changed positively for me. I celebrate them every month. When they clocked nine months recently, I celebrated them. I have been celebrating God in their lives. I have increased in many ways. Immediately these babies were conceived, the number of my radio stations increased. We now transmit in Abeokuta and very soon we will be  in Ado-Ekiti.

There is an assumption that you had a child in the past. Is that correct?

I never had any biological children. My siblings stay with me so I automatically adopted their children. I used them as a point of contact for my miracle. The desperation to have children is not easy. It takes you everywhere. From going to the mountains to pray to hospitals for a series of tests. Already Yinka Ayefele is on a wheelchair and most people think that it will be impossible for me to have children because of my condition.

Were you ever discouraged at a point?

One thing about me is that I’m stubborn. I never take defeat. That’s why I still believe that one day I will still walk. I don’t think anything is impossible with God. Just believe in Him and He will work it out. That is my own belief in life. I don’t see anything being impossible. I have been trying to manage my condition despite the rumours about my infertility. Maybe out of respect, no one really confronted me to ask if I was truly infertile.

How supportive were your family members?

They were very supportive. My family members never abandoned me. My wxtraordinary woman. I call her my mum. I met her while I was working with Radio Nigeria Ibadan and my colleagues at Broadcasting Corporation of Oyo state used to bring jingles for me to produce. My wife turned out to be a cousin of one of my colleagues Olaitan Adeniyi. Few weeks after I met her, I had an accident and she stood by me all along, working together. I don’t know how to describe her. She endured a lot. She tried several options, In Vitro fertilization (IVF), Intrauterine Insemination (IUI) and experienced several failures. She is one in a million. I really thank God for her courage.

Do you think your wealth played a role in this miracle?

Am I wealthy? I thank God. I have spent millions and I have the grace to spend it. I spent money in the States, London but eventually God did it. I tried several hospitals in Nigeria as well but only one stood out. That is Delight Hospital and Fertility Centre in Ibadan. They made it possible for us to be parents today. Anyone who has done IVF or IUI knows what it costs, especially when you are doing it outside Nigeria, if you take into consideration the hospital bills, accommodation, flight, a lot of expenses attached to it. But eventually God did it in Nigeria.

What does that say about the health institutions in Nigeria because quite a number of people have little faith in our health system?

The treatment in Nigeria is even far better than most of these treatments outside the country. Once it fails, there is no refund. But in Nigeria, they will encourage you. We have some of them that do not care about your situation but I know of three fertility clinics here that are more concerned about their success stories. My case prompted us to create a group for couples going through infertility problems. We created a group where we assist couples who want to go for IVF/IUI treatment financially. We have been doing that for the past four years now. Even before I had mine, we supported a family in this infertility community that we created and they had quadruplets.

There is a report that you received a prophecy about your children. How true is it?

It’s true. Yes I received a prophecy from prophetess Esther Abimbola Ajayi in London. I went to her church to minister and she told me that as long as women who have passed the age of bearing children can still carry their babies, that I will definitely have mine. Her words were ‘Yinka Ayefele, God said He is going to do it for you if only you believe.’ That was two years ago and it eventually happened.

Are we expecting an album on this?

I already did an album. I knew they were coming so I did it last year.