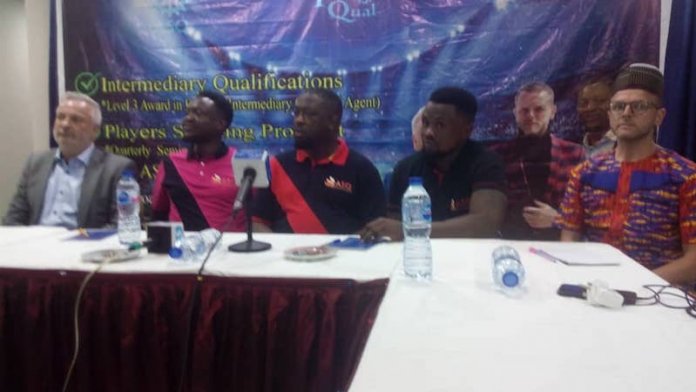 A UK-based company, ASQ Training and Development, has launched a mobile application App for a “Level Three Certificate in Football Intermediary” qualification, to train and support budding football agents and players.

The ASQ Group Managing Director, Samson Adeosun, in the company of renowned football intermediaries and players’ representatives, John Viola and Philip McTaggart, made this known at a news conference in Ikeja, Lagos, Nigeria at the weekend. Adeosun said that there were lots of football agents in Nigeria and Africa, but that unfortunately, majority had no proper experience coupled with bad reputation due to unscrupulous activities of a few.

​“The idea for a developmental program for football intermediaries was born out of my personal experience. It was after I get my intermediary licence from the English FA that I realized that I virtually did not know what next to doand this is the experience of most agents in Africa” Adeosun noted. He added that though there are no stringent qualifications before someone is allowed to represent players but it is important that individual agents acquire knowledgeand skills that will make them effective and productive in the player management value chain.

“There are lots of agents in Nigeria, but the fact remains that they do not know what to do when it comes to international business player management.The Level Three Certificate in Football Intermediary program is to empower the intermediaries in the areas of identification, marketing, protection and management of players thereby helping them to get out the best out of the playing careers”, Adeosun, who also is an English FA licenced Intermediary added.

In his own contribution, an internationally renowned football intermediary and player manager, Viola said that ASQ had identified the need for such a training and certification to support and encourage budding football agents to get their acts right. Viola who was part of the success careers of players like Luis Figo and Roberto Carlos noted that the training would help those looking to succeed in the complex but lucratively rewarding profession of player management.

On his own part, Philip McTaggart, another established player manager advised that intermediaries should embrace the ASQ training for the general interest of football. ”Aside getting the ability to sell quality players, participating in the ASQ development training will avail the agents the many advantages including a rich global network. The participants will learn the rudiments and dynamics of the global football market thereby reduce the incidences of Nigerian players being rejects abroad”, McTaggart concluded

The ASQ “Level Three Certificate in Football Intermediary” qualificationwas created in partnership with ProQual, a UK skills and training awarding body, regulated by the Office of Qualifications and Examinations Regulation (Ofqual). The various courses which will be holding in Nigeria at different times will open empower the participants to practice and be recognised globally.

According to the Executive Director of ASQ, Mr Adedayo Adeniyi the App, ‘ASQ Sports Hub’ is already available on the Android store while the IOS version will be out soon. He added that the hub has a lot to offer already accredited football intermediaries as well as aspiring ones, scouts and players who which to be scouted too.