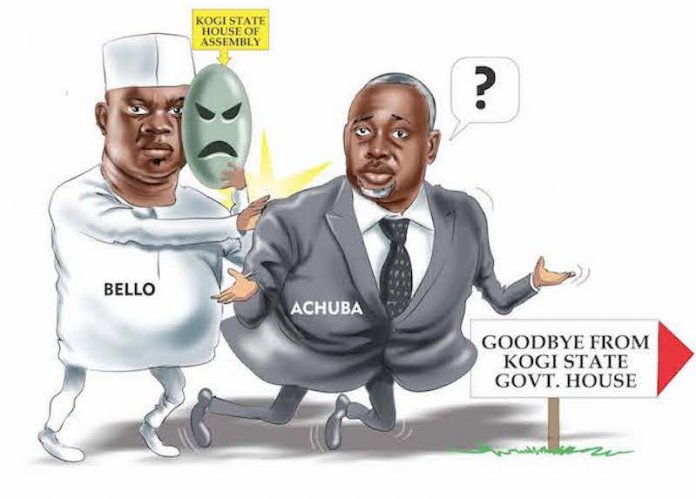 The impeachment of Kogi State’s deputy governor is dangerous and provocative. It marks a new low for constitutionalism

In what reads more like a coup against the constitution and public decency, the tenure of Mr. Simon Achuba as the Deputy Governor of Kogi was controversially terminated last week. He was “impeached” by the Kogi State House of Assembly despite being exonerated by the findings of a seven-man investigative committee that probed allegations of gross misconduct and financial impropriety against him. With Governor Yahaya Bello dictating the tune, and Kogi lawmakers behaving like a mob of hired political handlers, the state police command completed the whole farce by practically hounding the deputy governor out of office.

Unfortunately, there is a growing pattern in which the people expected to make laws for the country are increasingly becoming lawbreakers.Although there are constitutional provisions for impeachment, assembly members most often invoke flimsy excuses whenever their governors are tired of their deputies. Yet, more often than not, at the bottom of these questionable impeachments are personal grievances that have nothing to do with the welfare of the people of their states. The ultimate victims of this state of affairs are people of their states who are denied quality governance, as it is the case with Kogi State today.

The mischief in this illegal impeachment is that all the actors are well aware that it will not stand legal and judicial scrutiny. But they act on the basis that because our judicial process is slow, the best an aggrieved person would eventually get from court is judgment and not justice. In the present case, by the time the legal challenge instituted by Achuba commences, his term would have ended. This cynical approach to law and order should never be permitted in any decent society.

The swearing in of Mr David Edward Onoja by the Chief Judge of Kogi State, Mr Nasir Ajana has further compounded the problem. It is a confirmation that the three arms of government in Kogi State are under the vice grip of Governor Bello. Here is the Chief Judge of a state that empanelled a committee in line with section 108 of the 1999 constitution (as amended) to investigate the allegations against Achuba by the Kogi State House of Assembly. The committee reported back that there were no verifiable grounds for impeachment against the deputy governor and consequently returned a verdict of not guilty. The same chief judge, whose panel acquitted Achuba of any misconduct, suddenly flipped to conform to an odious plot by a desperate governor to forcefully remove his deputy.

Swearing in another deputy governor, while the office has not become constitutionally vacant, amounts to a gross misconduct. The Chief Justice of Nigeria (CJN), Justice Mohammed Tanko and the National Judicial Council are therefore called upon to investigate the Kogi State Chief Judge on this sordid matter that has put a question mark on his integrity and a stain on the judiciary in our country. What is particularly strange is that throughout the constitutional coup in Kogi State, the ruling All Progressives Congress (APC) said nothing and did nothing to stop that rape of democracy by a governor flying their party’s flag. Whatever may be the political differences between Bello and Achuba, nobody should be allowed to set aside our constitution and corrupt our democratic order for their selfish agenda.

Ordinarily, impeachment is a process with unambiguous laws guiding how it could be prosecuted. To that extent, what happened in Kogi was an affront on the rule of law. But beyond the legality of the impeachment, there are also other issues, especially given that Kogi is reputed to be one of the violence-prone states in the country. How will the Independent National Electoral Commission (INEC) be able to conduct a hitch-free gubernatorial election within so short a time under the current atmosphere of impunity created by Governor Bello?

In all, the message unwittingly being sent out by Bello and fellow travellers in Kogi State is that governors and lawmakers could engage in any reckless, unlawful, improper and questionable activities as long as their interests are served. It is damaging to our democratic credentials. We are being marked down as a country where anything goes, where obstacles are deliberately placed on the path of perceived opponents, and where a constitutional instrument meant to enhance good governance is being wilfully abused and desecrated.

Quote
The message unwittingly being sent out by Bello and fellow travellers in Kogi State is that governors and lawmakers could engage in any reckless, unlawful, improper and questionable activities as long as their interests are served