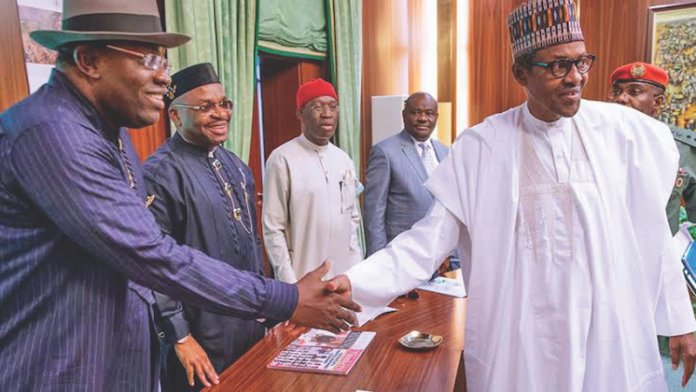 President Muhammadu Buhari’s statement that he would order a forensic audit of the Niger Delta Development Commission is sure to open the Pandora’s box, writes Ernest Chinwo

Recently, President Muhammadu Buhari, during a meeting with governors of the South-south states, said he would order a forensic audit of the Niger Delta Development Commission (NDDC) since its inception.
The President’s decision was premised on the fact that the commission’s performance in terms of projects did not justify the huge resources that had accrued to it. Buhari’s concern was however felt by many.

The NDDC has over the years gotten budgetary allocations in hundreds of billions. Indeed, in 2014, it proposed a budget of N322.6 billion. Also, in 2018, the National Assembly passed a budget of N346.5 billion for the commission, a budget that was also replicated in 2010.

According to that budget, the NDDC was to spend N19.5 billion on personnel cost, N12.7 billion on overhead, N20.88 billion on capital expenditure while N311.4 billion was for development projects of the commission.
While the commission has argued that many oil and gas companies that are by the Act establishing the NDDC, supposed to remit a percentage of their budget to the commission, had refused to do so, the performance of the interventionist agency has not been encouraging either.

The commission has, unfortunately, created for itself an image of a “settlement” agency – out to dispense political goodwill to agents of the government in power.

It is also sad that the commission has for many years not been able to complete its own corporate headquarters despite pronouncements by its successive leadership that that project was a priority.
All the NDDC has to show for its headquarters in Port Harcourt is mere cosmetic cleaning of the project site as if serious work was ongoing there.

The youth and the docile have also cashed on the image of the commission to besiege the Aba Road, Port Harcourt temporary headquarters on a daily basis to force the management of the commission to give them their “share” of the resources.
When organised youth bodies or ex-agitators of the region are not barricading the entrance to force a meeting with the management, the physically challenged are there to disrupt the flow of traffic on the ever-busy road to press home their demands.

But apart from these organised groups, visitors to the head office are daily harassed by young men, who hang around the gate and accost any visitor for their “own share from the contract” the person had gone to do at the commission.
Indeed, a visitor stands the risk of being robbed or manhandled if his/her pocket or hand is suspected to contain money. And this happens in the full view of the motley of security personnel massed up at the entrance.
Perhaps, it was on this premise that Rivers State Governor, Nyesom Wike, accused the commission of failing to deliver on its mandate.

He declared that the NDDC has failed to deliver on its core mandate of the development of the region, because the commission has become a political institution where funds are used for political purposes.
The governor was of the opinion that the federal government deliberately might have refused to constitute the NDDC Governors’ Advisory Committee, knowing that many of the South-south states were under the control of the opposition Peoples Democratic Party (PDP).

Wike spoke during a courtesy visit by the former acting Managing Director of the NDDC, Prof Nelson Braimbaifa.
He said: “NDDC has become a political institution where money is set aside for politics. Mention one mega project by the NDDC anywhere in Rivers State.

“The only mega project, the Mother and Child Hospital, which was to be a joint project, the NDDC duped the Rivers State Government. For the Mother and Child Hospital, we paid our counterpart fund and NDDC paid nothing. We have taken over the project, yet the NDDC has refused to refund our money. If the NDDC fails to refund our counterpart fund in seven days, we will drag the Commission to court”.

The governor regretted that any prominent politician in the South-south, who wanted to be a governor, was appointed a managing director of NDDC and that such politicians were allowed to siphon development funds, only to resign two weeks to the election.

“They have refused to constitute the governors’ board since 2015, because majority of the South-south States are controlled by the PDP.
“Nineteen years after establishment, the NDDC is still constructing its headquarters. All the participating states have no mega projects. The NDDC was designed to help the Niger Delta grow, but that is not the situation on ground. Can we justify the funds that have passed through the NDDC?” he queried.

“It is a shame that what our people in the Niger Delta fought for is not what is on ground at the NDDC. You claim to have over 1,000 projects in Rivers State and we are still where we are today,” he stated.

He therefore advised the management of the NDDC to go back to the drawing board to fashion out ways to site mega projects in the states covered by the commission as the current piecemeal projects would not help to develop the region.

Wike might have spoken for Rivers State. But his claims were not different from the experiences of other states.
The NDDC, in Rivers State, just as in other states covered by the commission, had been involved in award of contracts for municipal roads and other roads that lead mostly to places where its directors have property or other interests; projects that ordinarily should fall within the purview of the states or local government councils.

Unfortunately, the same is true for both the management controlled by the PDP and the All Progressives Congress (APC).
Last Tuesday, a transparency and responsive governance advocacy group, The Human and Environmental Development Agenda (HEDA), said forfeiture of the Port Harcourt palatial house owned by former NDDC Director of Finance and Administration, Henry Ogiri, to federal government on orders of the court justified Buhari’s order for a deep probe of the commission.

Kazeem declared at the New Haven spot that, “This property formerly belonged to Ogiri, former director in NDDC. We investigated, prosecuted him and this is one of the properties he forfeited finally, to federal government. Currently, it is under our close watch so people won’t vandalise it pending final disposal, by FG.” Ogiri was a member of the PDP, when he served before defecting to the APC when Buhari assumed office as president.

Chairman, HEDA Resource Centre, Suraju Olanrewaju, on Ogiri’s forfeited home, said, “This is giving credence to FG’s directive that the whole NDDC be audited. A director of finance, just one person, can have this palatial building that is only akin to what you will see in the Arabian Peninsula. He built it to his taste at the expense of the Niger Delta.”
Definitely, there are many Ogiris while the region suffers. The same officers would claim there is no money to carry out development projects in the region. But the paucity of funds never affected their personal projects from ill-acquired funds from the commission.

Curiously, the NDDC has blamed lack of funding for its failure to meet its obligations in the development of the region.
In 2013, it blamed funding challenges for the delay in the completion of over 4,000 on-going projects being executed by the commission in the region. This was part of the key points highlighted, when the commission defended its N322.6 billion 2014 budget before the Senate Committee on the NDDC in Abuja.

Then Managing Director of the interventionist agency, Sir Bassey Dan-Abia, told the committee that the funding of the commission had not been completely in line with the provisions of the act establishing the NDDC. This, he said, had posed a serious challenge in achieving the mandate given to the commission.
The same excuse is being recycled even when some of the corporate bodies that refused to fulfill their obligations as stated by the NDDC Act have started complying.

While many analysts welcome Buhari’s forensic probe, there are fears that since the probe could also affect some of his key party men, it could be a stillbirth to protect the integrity, if any, of his footmen. But should the audit be carried out, it promises to open the pandora’s box, even to the shock of the president.