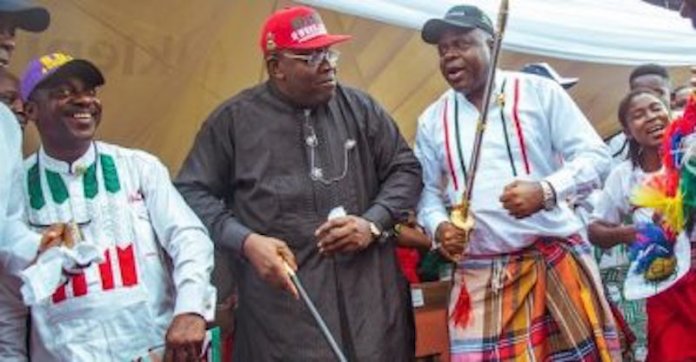 As the battle for supremacy and struggle to retain the status quo by the All Progressives Congress (APC) and win the governorship election in Kogi State gathers momentum, the major opposition Peoples Democratic Party PDP is not leaving any stone unturned as it had intensified plot to unseat Governor Yahaya Bello in the November 16 gubernatorial election.

No doubt the political landscape in the Confluence State has been a beehive of activities in the preceding weeks, the ruling APC was more noticeable for deftly moving to ensure that Bello is reelected for second term. The week also witnessed gale of defections as many prominent members of the opposition PDP from various senatorial districts joined the APC and drummed support for the party and its candidate.

For instance, the Kogi West Political submit group has vowed to support Bello to strengthen the chances of the district to take the governorship slot in 2023
The people of Kogi West senatorial district, comprising 7 local governments, while endorsing Bello stressed that their support for him was burnout of their determination to further espouse their political emancipation in the next dispensation and actualise their ambition to govern the state. Interestingly, some of the developments designed to shape the coming election included the brazen and unconstitutional impeachment of former Deputy Governor, Simon Achuba, who has been facing certain challenges since 2017.

But this, the political pundits had described as a miscarriage of justice by the Kogi State House Assembly, which in itself had become a veritable tool for various abuse.

Whatever was the rationale behind the sack of the deputy governor, it is the thinking of many that the timing was wrong, pointing out that even if the APC had done the enough home work to curtail all the crises creating disaffection with the rank and file of party members, discretion was of the essence.

Achuba’s impeachment followed the submission of the panel’s report set up by the state chief judge, Justice Nasiru Ajanah, to investigate allegations of gross misconduct against the former deputy governor.

House Leader, Hassan Bello Abdulahi, representing Ajaokuta State Constituency, who announced the decision of the assembly said Achuba stood impeached after careful consideration of the report of the John Bayasea committee submitted last Friday.
But Achuba has described the impeachment as illegal, unconstitutional, null and and void, which could not stand the test of time and therefore called on President Muhammadu Buhari to beam searchlight on the level of lawlessness going on in Kogi to prevent the emergence of another insurgency.

The former deputy governor stated that he had already instructed his legal counsel to commence judicial process to reclaim his mandate and put an end to executive lawlessness in the state. He lamented that he was treated like a common criminal, when police were drafted to prevent entry and exit from his official residence, while electricity to his house was disconnected and his generator disabled.

While the impeachment has been trailed by controversy, leader of the Assembly, Abdulahi, in a statement on behalf of members accused the judicial panel of inquiry of compromise in the assignment given to them.
He said based on the “Rule of Procedure” given to members of the panel, their assignment was a fact-finding one, and were not required to give any resolution.

“The panel submitted report to us and based on their report, we gave our verdict. The rule of procedure says that the Panel is a fact-finding panel; they are not to give judgment and it was in the rule of procedure, which they accepted. They are not supposed to give any verdict in this circumstance.

“The decision of whether the deputy governor is guilty or not guilty is that of the House. If you look at Section 188(11), it says the House of Assembly is the only authority, which determines what gross misconduct is. It is not for the panel to say proved or not proved.”

However, the PDP, despite its challenges is making frantic efforts to ensure total victory for governorship election. Though the conciliatory efforts in Kogi State has yet to yield expected results.

Only recently one of the aggrieved aspirants had decried the reconciliation committee’s comment, which described the matter as family affairs. The Campaign organisation of Abubarka Ibrahim was also worried by the recent newspaper report that a former governor of the state, Ibrahim Idris, being his father and father-in-law to Musa Wada, candidate of the party, was crucial to the resolution of the PDP crisis.

“Our principal is not a villain as being painted in some quarters. He felt shortchanged in a democratic exercise and he followed party procedure to seek redress. Sadly, the party neither acknowledged nor addressed his complaints.

“Abubakar Ibrahim is a peace-loving and law abiding politician, who hates cheating and believes in the rule of law. His decision to seek justice in the court is well within the ambits of his rights as a citizen of Nigeria. Since 2003, when he joined the PDP, he has been a loyal and dedicated member.” It also observed that the primary and the manner he was treated like an underdog, the judiciary remains the only place he could seek redress over his grievances.

“The future of any political organisation is in God’s hand. The Ibrahim Idris political family is not playing God, but rather believes all groups are important and should be treated equally and fairly. Over the years, the group has displayed unbridled loyalty and dedication to the PDP.
Pix: Governor Dickson campaigns with Senator Diri.jpg