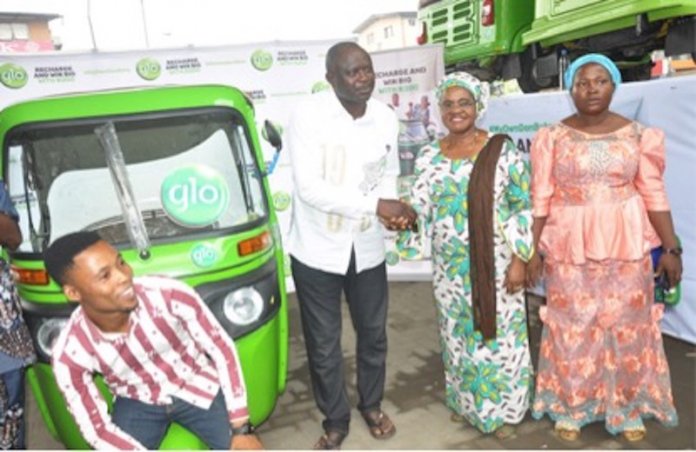 Organisers of consumer promotions these days have to work probably twice as hard as they did some years back to achieve the same level of success. Needless to say the wall of skepticism in many subscribers’ minds today is so thick that it takes pragmatic approach and transparent execution to wear it down, writes Bamidele Famoofo

There is a wall of apathy built in the minds of Nigerians over the years against government and even corporate organizations on their sincerity to deliver on the promises they make to them. The attitude which developed over time is not unconnected to failure on the part of some players in the public and private sectors of the economy to do exactly what they say.

But Nigeria’s leading telecommunications company, Globacom; said there is an answer for every question and a solution to every problem. This conviction by the master of ground-breaking consumer promotions launched recently by Glo, informed the approach it adopted for its ongoing promo ‘My Own Don Beta’. According to a reliable source at Glo, the strategy is one that is sure to break down the wall of unbelief in the minds of telecom consumers. “The approach accords pragmatism and transparency a pride of place as a way of assuring members of the public that the company means serious business.”

In fulfillment of its promise, Globacom last Thursday organized what some of its consumers described as a transparent draw right in the middle of the popular Computer Village in Ikeja. Key stakeholders in the popular ICT-focused market were invited to the canopy set up on Oremeji Street in the heart of the market.
It was something akin to a carnival, as a skilful DJ filled the arena with dancehall music. Some of the prizes up for grabs were prominently displayed beside the canopy to show any ‘doubting Thomases’ that the advertised prizes had been procured in readiness for being given out.

After a few speeches by the company representative, Victor Kalu and some of the guests, including computer village market officials, Nollywood actors and comedians, the draw began under the keen observation of the market crowd and invited dignitaries.

To further boost the confidence of the people in the process, Globacom involved random personalities among the invited guests in the computerized draw. The option of a computerized draw was adopted by Globacom in order to give equal chance to everyone who participated in the promo from the date of launch up to the point of holding the draw.

All the dignitaries had to do was to hit any key on a laptop on the table in front of the crowd for the computer to pick a random telephone number belonging to one of those eligible for the draws. One after another, market executives, Glo brand influencers and Nollywood artistes had their turns hitting the computer to produce winners.

In all, a total of 100 Nigerians emerged the first set of winners at the draw keenly watched by the representatives of Nigeria Lottery Regulatory Commission (NLRC) and the Nigerian Communications Commission (NCC).

Also in attendance were Nollywood greats, Mrs. Patience Ozokwor (Mama Gee) and Mrs. Sola Sobowale; renowned comic, Mr. Victor Osuagwu and Instagram sensation, Mr. Samuel Perry, popularly called “Broda Shaggi”.
When it was time to contact some of the winners, the issue of skepticism came up again. Some of the winners first took the news of their winning with a pinch of salt. With the exception of Nike Olayiwola of Iwaya, Lagos who screamed for joy the moment Desmond Elliot called her and gave her the news she had won a grinding mill, the others took some time to be convinced they had actually won some of the prizes.

Michael Stanley from Ikorodu who won a tricycle, for instance, seemed to believe somebody was playing a prank on him. After a while, especially when he heard the hailing of the crowd gathered under the canopy, he finally got the message that it was not a prank. He was soon heard urgently asking: “When can I come and pick up the prize?” to the wild laughter of the audience.

Emeka Uzo from Iyana Ipaja, another tricycle winner, was harder to convince. What Desmond Elliot was telling him seemed to be falling on deaf ears, until Nollywood legend, Patience Ozokwor, collected the phone and spoke to him in Igbo. It was only then the message sank into his mind that he was indeed a winner.
Winners Speak
Winners received their prizes at the prize-presentation ceremony that held in Lagos last week Wednesday amid funfair and celebration.

Omowunmi Obafemi, from Ilesha, a fresh graduate of Special Education from the University of Ibadan going for national service next month who won a generator said; “I want to say thank you very much to Glo for making me to be one of the winners. I am very grateful. I will take the generator to my husband’s house as I will soon get married”.

Another lucky winner, Adesina Ahmed from Alagbaka, Akure, enthused: “I am so happy because I did not know that it is real. Thank you fantastic Glo! I will use the generator. No darkness anymore!
Obinna Nwoye, a 42-year-old construction worker from Abeokuta was one of the many lucky winners and this is what he said: “ I am very very happy when they called me. Glo has turned my life around”.

Comments by Dignitaries
Some very important persons who witnessed the ceremony where winners of the Glo promo collected their awards at Lagos showered encomiums on the brand.
Secretary to Government of Lagos State, Mrs Folashade Jaji said “Congratulations to Globacom for coming up with this initiative. I congratulate all winners. I hope Globacom will organize training for the Keke winners. I urge other telcos to emulate this Glo gesture”.

Ace artist, Prince Jide Kosoko, applauded Glo, noting that as a Telco, its main responsibility has been service delivery, adding that the company is doing more for its valued subscribers with the promo.
David Eze, Vice President, Mega Autoparts and Allied Traders Association said “I am glad to be here. I came to confirm that it is a reality. I did not believe in promo but from what I am seeing, I am so impressed that I have been recharging. I believe that I will win and my life go beta”.

Comrade Sulaiman Kamal, Treasurer, Tricycle Owners Drivers Association of Lagos State in his remark said “Una well done o! My wife is using Glo. I bought Glo and will like to win Keke. This one is for real it is not boju-boju”.

Before the launch of the promo at the Mike Adenuga Towers Head Office of the company in Victoria Island, Lagos on October 3, 2019, Globacom made sure it did not only secure the buy-in of all the relevant regulatory bodies, such as the National Lottery Regulatory Commission (NLRC) and the Nigerian Communications Commission (NCC), but also actively involved them in the execution.

The promise of the promo was to give life-changing tools of trade to winners to enable them start small businesses of their own, or empower their relatives to start earning a living through new streams of income.

The prizes promised include tricycles, otherwise called ‘keke NAPEP’, industrial sewing machines, grinding mills, and generators. All telecommunications consumers need to do to win is to recharge with a total of N200 in a day either in one recharge or cumulative recharges. Multiple entries are encouraged to increase the chances of the participants.

What is more, that N200 is still there for the subscriber to do whatever he or she likes for text, calls or data.
Also at the time of launch, the company promised that subscribers in all parts of the country had a chance to emerge winners, adding that prize-presentation events would be held in Lagos, Abuja, Port Harcourt, Benin, Ibadan, Kano, Jos, Enugu and Onitsha.