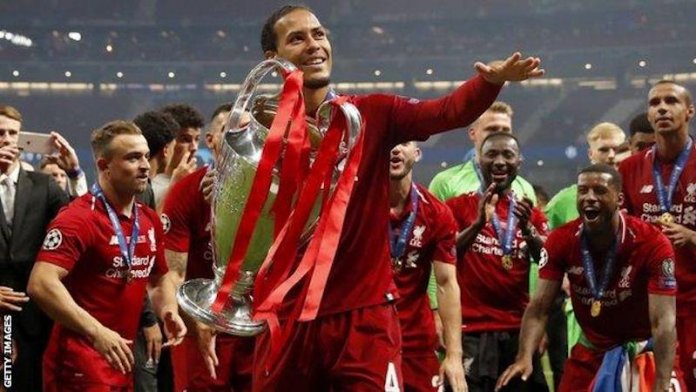 Virgil van Dijk is one of six Liverpool players to be named alongside Cristiano Ronaldo on the 30-man shortlist for the 2019 Ballon d’Or.

Champions League winners Liverpool have by far the most players on the list from one Premier League club.

Manchester City and Tottenham have two, with Sergio Aguero and Bernardo Silva from the Premier League title holders and Hugo Lloris and Son Heung-min from Spurs.

Arsenal forward Pierre-Emerick Aubameyang is also on the list.

The Ballon d’Or winner will be named in Paris on 2 December.

Luka Modric won in 2018 to end the seven-year dominance of the award by Messi and Ronaldo.

Van Dijk is among then favourites to win this year’s award after being named Uefa Player of the Year in August.

A version of the Ballon d’Or has been awarded by France Football magazine since 1956, but was merged with FIFA’s World Footballer of the Year award from 2010 to 2015.

However, FIFA ended their association with the Ballon d’Or the following year to set up their own – the Best FIFA Player award.

In September, Lionel Messi won that award in the fourth edition of the Best Fifa Football Awards, set up after football’s world governing body ended its association with the Ballon d’Or.