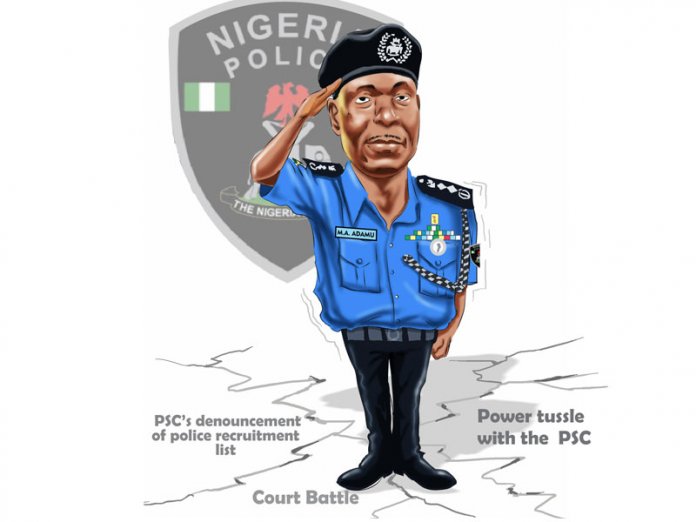 There is an urgent need to amend the PSC Act

Even when the rivalry between the office of the Inspector General of Police (IGP) and the Police Service Commission (PSC) is a recurrent development, it was never as pronounced as what we are witnessing today. With a serving Deputy Inspector General of Police dragging the PSC before the National Industrial Court (NIJ), the commission has in turn denounced the recruitment list of constables recently released by the police, describing it as an act of Illegality. In a period of national insecurity when we need a synergy of positive mix of ideas between the IGP office and the PSC, this needless squabble is to say the least, dangerous.

Ordinarily, the PSC is in the same line of order with the Federal Civil Service Commission, Federal Judicial Council and the National Assembly Service Commission. They have the same constitutional powers and duties in the areas of welfare, recruitment, discipline and promotion of all categories of staff. According to the commission’s establishment amendment act of 2001, some of the basic duties include but not limited to the following: be responsible for the appointment and promotion of persons and functions to offices (other than the office of the IGP) and exercise disciplinary control over persons (other than the IGP).

The commission is also expected to formulate policies and guidelines for the appointment, promotion, discipline and dismissal of police officers; identify factors inhibiting or undermining discipline in the Force; and implement policies aimed at the efficiency and discipline. It is also empowered to perform such other functions which in the opinion of the commission may be required for optimal efficiency of the force. The commission, according to the law, “shall not be subject to the direction, control or supervision of any other authority or person in performance of its functions other than as is prescribed in this Act.”

From the foregoing functions of the PSC, it is abundantly clear who has the powers to recruit, discipline and promote all cadres of officers of the police, except the IGP. Therefore, as the law stands today, issues of recruitment, discipline and promotions are clearly outside the powers of the IGP. His duties and powers do not include any of the constitutional functions and responsibilities of the PSC.

It is on the strength of these constitutional powers being allegedly infringed upon that the PSC is fighting in the public space, even though that is also unfortunate. “The commission is presently in court against the Nigeria Police Force over the hijack of its constitutional powers to recruit and had filed originating summons and interlocutory injunction restraining the NPF from going ahead with the exercise,” said the commission in a statement last week, adding, “the processes filed since September 27, 2019, by Chief Kanu Agabi (SAN), were brought to the knowledge of the Inspector General of Police the same day”.

Police typically are responsible for maintaining public order and safety, enforcing the law, and preventing, detecting, and investigating criminal activities. These functions make it difficult for the institution to whimsically disobey the law. But we also cannot understand the present situation where the powers to recruit and discipline reside outside the Force. While not belittling the role of the PSC, addressing the safety and security challenges currently confronting Nigeria is the function of the men and officers of the police. That should make the IGP more than a ceremonial head.

As chairman of the Police Council, President Muhammadu Buhari should intervene on this sordid crisis that has gone on for so long. First, he must call the IGP to order. Then there is an urgent need to send an amendment to the PSC Act that gives the commission omnibus powers. This rivalry, not helped by the appointment of retired IGPs to chair the PSC, is a result of several years of military rule. We must put an end to it in the interest of our national security.

Quote
While not belittling the role of the PSC, addressing the safety and security challenges currently confronting Nigeria is the function of the men and officers of the police. That should make the IGP more than a ceremonial head