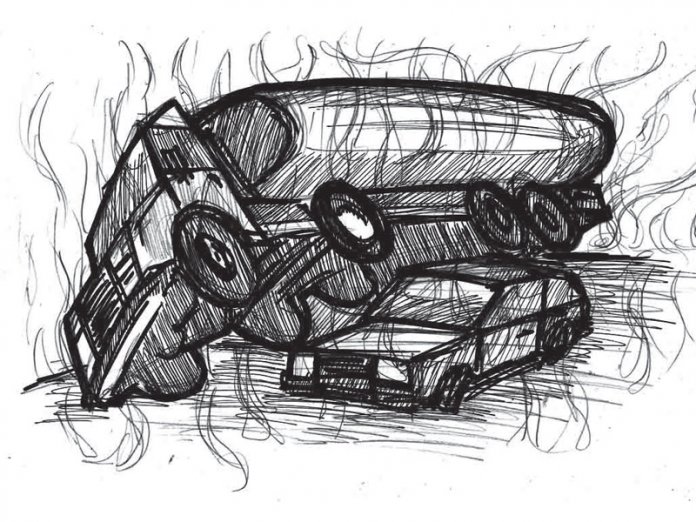 For the third time within the past 10 months, and a second time in Onitsha, Anambra State in the past four years, it was another hell on earth for several families on Thursday following the explosion of a fuel-laden tanker. Dozens of residential buildings and hundreds of lock- up shops were gutted by the fire. But the most tragic fall-out was the death of a woman and her daughter in the inferno. According to reports, the vehicle was descending from the Zik’s roundabout end of Onitsha -Enugu expressway when the driver lost control and veered off the service lane. The tanker’s head reportedly fell off and went up in flames after spilling its content within the area.

In January this year, exactly six months after a tanker truck loaded with petrol fell and spilled its contents on the Otedola Bridge axis on Lagos-Ibadan expressway, bursting into flames and killing several motorists, a similar tragedy occurred in Odukpani Local Government Area of Cross River State. The tanker was heading outside the state capital when the driver reportedly lost control of the steering in a futile attempt to dodge a pothole. While the villagers who had rushed to the scene to scoop fuel from the upturned tanker were still busy filling their jerry cans, an oncoming vehicle was said to have hit the tanker, causing an instant explosion.

In the wake of these tragedies, there has been unending debate about the nightmare that fuel tanker drivers have become in our country in recent years. In four separate incidents within a spate of one week in 2015, no fewer than 100 people were killed with property worth hundreds of millions of naira destroyed. Four years ago in the same Onitsha, no fewer than 85 fatalities were recorded when a petrol-laden tanker lost control‎ and rammed into a public motor park. Several buildings, vehicles and property worth millions of naira were consumed by the fire. Scores of others with different degrees of burns are also still in various hospitals across the state.

While we commiserate with the families of those who lost their lives in the most recent cases, we would like to again restate this newspaper’s position on the dangers posed by tanker drivers. In most countries, petroleum products are transported through pipelines and not by putting thousands of vehicles on the road every day as we do in Nigeria. A solution has to be found to that challenge. Meanwhile, we urge the Federal Road Safety Corps (FRSC), Vehicle Inspection Officers (VIO) and the police ‎to collaborate in jointly enforcing traffic rules across the country to stop these avoidable and senseless mayhem.

For years, many Nigerians have been at the mercy of these killer-drivers whose daredevilry on the road have claimed the lives of numerous innocent citizens. These drivers have no regard for traffic rules and regulations and under the cover of a strong union that goes on strike at the slightest excuse, they have become laws unto themselves. The manner in which they go about terrorising other road users had always left the public wondering whether these drivers were under some instruction to break the rules of civilised conduct.

The number of fatalities arising from petrol tanker explosions on our roads is unacceptable. That is aside the billions of naira that is lost to such fire incidents and the survivors who are scarred for life. If we are not to continue counting body bags, the authorities must do something about the deplorable state of most roads across Nigeria.