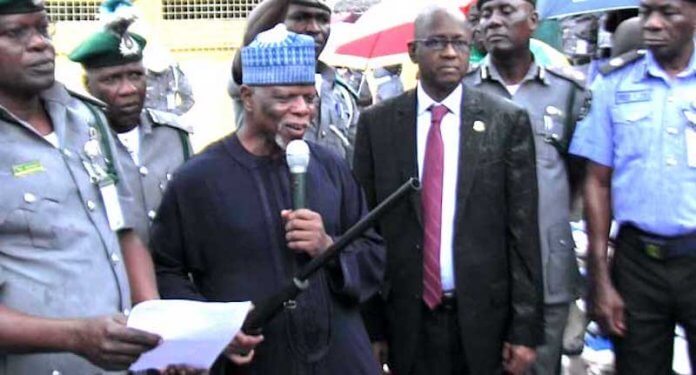 Nigerian Customs Services can do better than its recent motor park approach in search of undocumented vehicles. Shola Oyeyipo writes

The culture of doing things rather haphazardly and attempt to make sense of it has been part of the Nigerian leadership. It’s gone on for years unabated and the President Muhammadu Buhari administrative is not shy in displaying its official recklessness in the name of addressing some lingering national issues.

Not a few Nigerians want the country’s borders closed as it presently is. In fact, quite a number wants it tighter than it is if that is the only way to protect the Nigerian economy from illegally imported and dumped goods. Even at that, the activities of the Nigerian Customs Services (NCS) must not deteriorate to a state of dictatorship or means of harassing the citizenry?
Or how does government justify the new system of going to hotels and car lots to seize people’s cars on account of unpaid dues? Doesn’t that sound weird?

The immediate reaction of a lot of Nigerians to this trend is that it is a descent to dictatorship and therefore unacceptable. Hence, the NCS should fashion out more appropriate and acceptable ways of doing their job.
Some 11 days ago, a popular hotel in the Federal Capital Territory (FCT), Abuja, Frasier Suites, which is part of Frasers’ hospitality and located at the Central Business District (CBD), Abuja came under attack by of men of the Nigeria Customs Service on a fateful Wednesday night.

What was it about? The fully armed Customs officers stormed the hotel purportedly to raid and impound vehicles without proper Customs papers. They arrived in three customs patrol vehicles marked Zone B, Federal Operation Unit and Strike Force Unit and blocked the entrance to the hotel preventing visitors from either coming in or going out.

While the Custom officers from Comptroller’s unit, who carried out the raid said they acted on a tip-off from an informant that the hotel was allegedly warehousing vehicles without custom duty, the concern among the operators of the hotel was that such embarrassing situation was capable of negatively affecting their business, explaining why they fervently pleaded with them to leave the hotel premises.

A somewhat logical argument by the rampaging Customs men was that when action was intensified against many of the auto dealers engaged in sales of snuggled vehicles in Abuja, they opted to keep automobiles in that category away from the praying eyes of officials by parking them in hotels.

So, when vehicles with unpaid duties running into millions of naira were discovered in the hotel, the owners were invited to provide the Customs documents of their respective vehicles.
Apart from these Customs operations nationwide, men of the Nigerian Customs had also raided some car dealers in Abuja and their showrooms sealed. They took similar action in Lagos, Kaduna and Sokoto States.

Whatever explanation or justifications the Nigerian border protection agency may have for their onslaught on the public, the reactions of the public to their action on twitter clearly showed that the people disapproved of it.

For instance, former Nigerian Minister of Education, Dr. Oby Ezekwesili was one of those, who registered their condemnations for the policy on the grounds that it was uncivilised and draconian in nature, particularly considering that Customs were supposed to man the country’s borders and prevent illegal goods from coming into the country in the first place.

Ezekwesili, who Wowed on her twitter handle, went further to say: “I did not even see this evidence of weird policies by this Nigerian President, when my tweet on bad policies went out this morning.
“This is not bad. This is crazy policy. It will decline an economy already grasping for breath more. I need to have an intern compile crazy policies.”

Noting the negative implications this portends for Nigeria, Donat Nathan was of the view that, “The government does not know this type of action has a chain reaction that can affect the economy negatively. To them, they are fighting corruption.

“How can you close your shop and start chasing thieves instead of you to install CCTV or employ security? Nigeria is off the rail!”
Another bothered Nigerian, who earlier registered his concern on national television, Mr. Mazi Mathew Amadi, stated to the federal government that they should “Keep driving away investors”, and that “By the time Buhari is done, Somalia’s economy will be better than Nigeria’s.”

According to him, “How do you invade a 5-star hotel asking for Customs duty of cars? Who cleared them in the first instance?”
While Sardeeq noted that all car stands in Kaduna have been locked since Tuesday, because rumours had it that cars worth N18.5bn were smuggled into Nigeria, and the prime location are Abuja, Kaduna and Kano, Baba Yola’s reaction was that, “If cars worth 18 billion were smuggled, doesn’t it mean that somebody failed on the job?”

Relating his direct and similar experience with the Customs, an Ibadan-based businessman, Mr. Abdul-Raham Osifeso, reported that: “A team of three grown customs men came to my farm to in Omi Adio to ask for the customs paper on my vehicle. It wasn’t a 2019 Land Cruiser or Venza or Range Rover. It was a 1984 Subaru that has been in Nigeria likely before they were born. But they met their match as I had the documents”.
Bonaventure Anslem said: “I saw them checking car dealers along Kubwa road, and I am sure the dealers will probably still have cars from years back. Every policy that has been made is all targeted at killing businesses. I wonder what his ultimate plan is? Infest all citizens with poverty?”

Ameen Ibrahim argued that, “Instead of harassing innocent vehicle buyers, people should keep their vehicles once the point of purchase is identified. The public harassment is draconian and speaks of a government lacking in ideas of how to address the failures of the Nigerian Customs Service.”

There were not many comments in favour of the policy. The general overview of commentators was that the policy shows that the government lacks the common sense to run the affairs of the nation.
A major aspect of concern is that for registered vehicles already in use, the Customs had shown incompetence by allowing such vehicles into the country in the first place and that hunting for them in hotels and all such places is more like medicine after death.

The issue is, since the registering authority always asks for customs papers before cars are registered, it is at that stage that verification should have been done and not when vehicles had been registered and already on the road.

It is bad enough that the policies of the government are anti-people, not to talk of its un-implementable 2020 budget, a resort to motor-park approach in verifying customs dues is sad and unfortunate.

The National Assembly made some adjustments with its adoption of the recommendations on the Medium Term Expenditure Framework/Fiscal Strategy Paper MTEF/FSP for 2020 to 2022, through its joint finance committee, where the legislature increased the revenue target for the Nigeria Customs Service in 2020 by N557.4bn.

This is why leadership at all levels must ensure that the Customs agency is not pushed to the brink to the extent that it experiments with anti-people policies in its revenue generation drives.