The immediate past representative of the Rivers South-East Senatorial District, Senator Magnus Ngei Abe, has charged Nigerians to rise above age-long stereotypes and build bridges across the country without ethnic bigotry.

Abe gave this charge at the weekend while speaking at the annual New Yam Festival of the people of Isiagu Community in Awka South Local Government Area of Anambra State.

He said: “Whatever challenges we face as a country today should not discourage us from towing the path of unity and brotherhood. “Our history should remind us that we must be one. We must be our brother’s keeper and be united so that we can prosper together as no part of Nigeria can fulfill its full potentials without others.”

Abe, according to a statement signed by his spokesperson, Parry Saroh Benson, thanked the traditional ruler of Isiagu Community, Igwe Augustine Nwankwo, Ezedioramma II, Igwe Agu I, for the honour done him by the conferment of the chieftaincy title of “Nwanne Di Na Mba 1 of Isiagu.”

He also congratulated Igwe Nwankwo on the success of the annual new yam festival and urged him not to allow the culture of his people to be completely washed away by the influence of western culture.

He said: “I am glad that you have accepted me as Nwanne Di Na Mba 1 of Isiagu Kingdom. I want to say that I am now part of you and you are part of me and as the days go by, our friendship, love, and relationship will grow. Let us keep the things that have kept us as one.

“I always insisted that I will not accept titles, honours, and awards, while I was in office and I did my best to avoid such situations. Out of office, it’s a different story. I am genuinely flattered by your love and acceptance.” 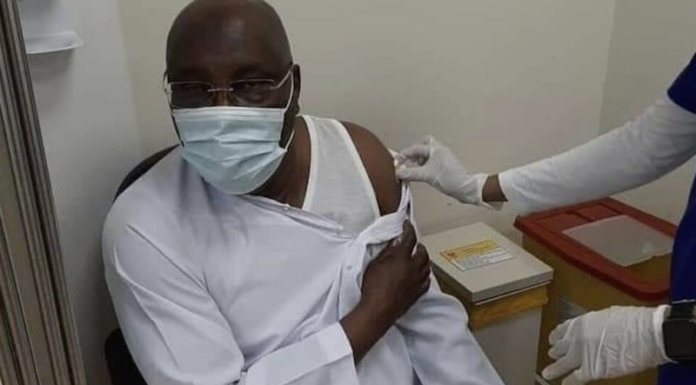 ATIKU ABUBAKAR AND HIS COVID-19 VACCINE