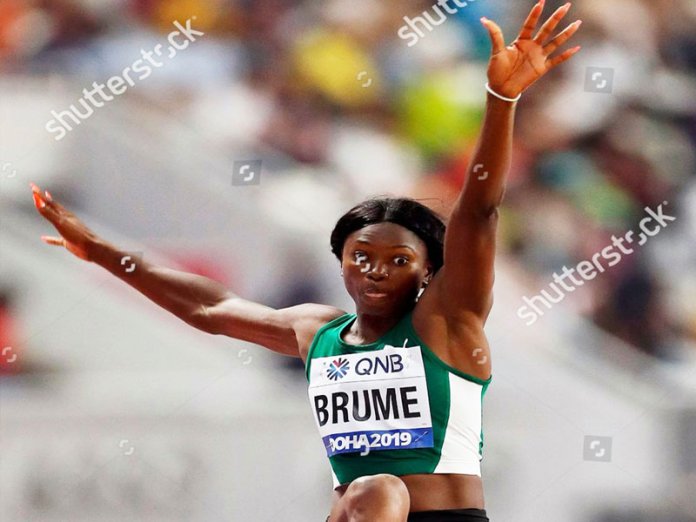 African long jump queen, Ese Brume, has qualified for the final of the World Atletics Championships which concludes in Doha today and looks good to win Nigeria’s second horizontal jump medal after Blessing Okagbare’s silver medal win six years ago at the 14th edition of the championships in Moscow.

Brume leapt a distance of 6.89m to automatically qualify for the final where her focus will be winning Nigeria’s first gold medal in the history of the championships.

She is now the third Nigerian to make it to the final of the event after Chioma Ajunwa and Okagbare.

Her main challenger in today’s final will be Germany’s Malaika Mihambo who tops the world list with 7.16m. Brume holds a 7.05m personal best which she achieved August to become the second best jumper in the world so far this year and knows she will need another jump over 7m to be guaranteed a place at the podium.

If she jumps over 7m,she will become the second Nigerian to do so in the history of the championships after Ajunwa soared to a 7.01m in the qualification for the final of the event at the 6th edition of the championships in Athens,Greece in 1997. Injury will however cut short the policewoman’s ambition of adding an IAAF Worlds gold to the Olympic title she won a year earlier in Atlanta, USA.

Also in with a chance of winning a medal for Team Nigeria on the final day of action is sprint hurdler, Tobi Amusan, who ran a new 12.48 seconds lifetime best to qualify for the semi final of the 100m hurdles. She will hope to go a step higher than she did two years ago in her debut at the championships and become the second out of five Nigerians who have made the semifinal of the event to scale through to the final.

Glory Alozie is the only Nigerian who has made the podium in the event, winning a silver medal at the 7th edition of the championships in Seville, Spain in 1999.