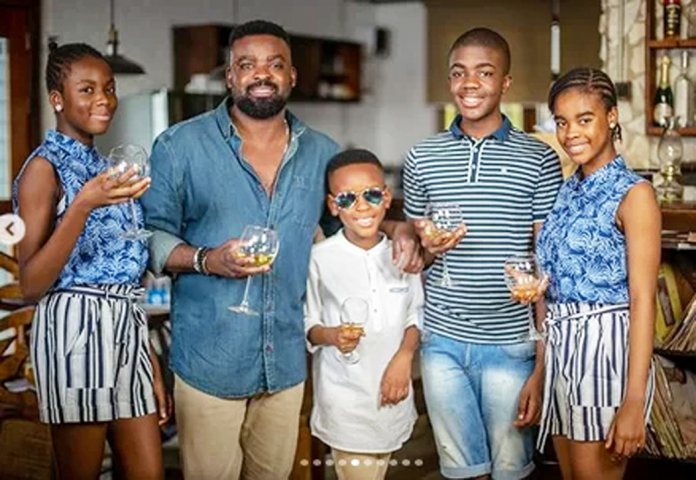 According to the reports, the filmmaker and his wife had gone their separate ways after failed attempt at saving their troubled union. Sources said the marriage had become laced with a lot of suspicion and distrust which resulted in Tolu leaving for good after futile attempts at savaging what was left of the internally troubled union.

Kunle and Tolu Afolayan got married in 2007 and have four children. Kunle would later confirm the gist of his alleged crashed marriage on Monday September 30,  2019, as he marks his 45th birthday. The actor marked it by posting new photos of himself and kids, leaving out his wife, Tolu. Recall that a few months ago, news broke that his wife, Tolu had quit the marriage over some messy issues.

According to reports, things between Kunle and Tolu got to a head after the two became hostile companions. Well, Kunle Afolayan sort of confirmed it when he shared photos of his immediate family to mark his birthday leaving out his estrange wife. He wrote “Just because God loves me.  Happy birthday Akande Ayodeji Adekunle Afolayan…Ire”

It was gathered that accusations and counter-accusations had become a recurring pastime between the Afolayans. Kunle had always been incessantly accused of being incurably adulterous. His alleged waywardness was said to be so legendary that he was perennially charged of lying with women of different shapes and shades.

Kunle Afolayan was said to have a thing for fetish lifestyle and idolatry, a practice which always put Tolu on the edge. She was very concerned about their kids as Kunle was hell bent on indoctrinating them with his alleged idolatrous beliefs. It is not clear if Tolu left with all the kids. Not ready to rue her matrimonial loss, Tolu has reportedly moved on as she has found romantic solace in a relationship with a Lagos big boy who had been dotting on her.

It was reported that a couple of weeks after bidding farewell to Kunle, Tolu’s newly found love interest bought a car for her.

Unconfirmed reports say Tolu and the mysterious lover might have been an item even before her marriage took the hits. Those in the know say Kunle and Tolu’s marriage was one of convenience as Kunle was never in love with Tolu. According to these sources, Kunle Afolayan was done with the union long ago but stayed in it because of their children who needed their mother’s care and attention on occasions when Kunle would be on locations. Fear of what the society would say was also said to be another factor that kept the award winning director in the marriage until lately. Kunle is the son of the famous theater and film  practitioner, Ade Love.

He majored in economics and started out working in a bank while doing some casual acting, before deciding to move into full-time filmmaking and taking a course at the New York Film Academy. Since 2005 he has been active in the Nigerian film industry. He has made several extremely popular titles including: The Figurine: Araromire which was in the Yoruba and English languages and Phone Swap. The Figurine won five major awards in the African Film Academy and experienced tremendous success in the Nigerian movie theaters.

FoodbayTV Ends 2020 with ‘Dining With the Stars’

Ndidi, Iheanacho on Duty as Leicester Crush Stoke to Reach Fourth Round