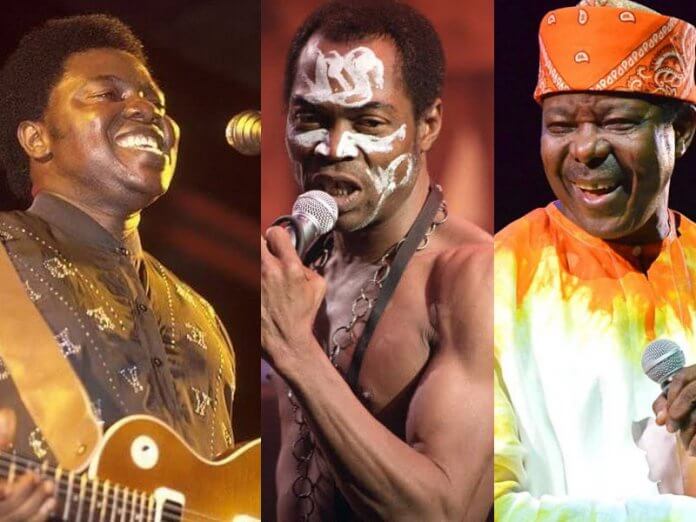 Before the likes of 2Baba and Wizkid earned international fame, the rising stars of the pre-independence and independence eras made waves with their indigenous music. Arguably, these periods were the most thriving in the music scene in Nigeria. They gave birth to some of the finest musicians in the country today who discovered their musical identity like the late IK Dairo who is renowned for incorporating the electric guitar to juju music. He was also paraded as the biggest African star in the 60s that fetched international fame.

The thriving genres in these periods were highlife music, now peculiar to the Igbo-speaking people; juju which had been in existence since the 1920s gained wider popularity as well as its other form, apala. Each of these sounds are rooted in indigenous cultures. For instance, juju which originated from palm-wine music was a music style that combined Yoruba folk music with musical idioms from countries such as Brazil and Cuba.It was music made for merriment. Fuji would later burst into the music scene in the late 60s with the rival bandleaders Alhaji Sikiru Ayinde Barrister and Ayinla Kollington.

Music of these eras despite their indigenous sounds infused with western styles celebrated life. Lyrics were not lewd, rather laced with realities such as ‘Joromi’ and ‘Mami Water’ by music inventor Victor Uwaifo.

“The stars of these eras didn’t really perform songs of freedom. They may mention it in their songs but it was never their main focus,” said Bimbo Esho, daughter of renowned music collector, Femi Esho of Evergreen Musical Company Limited. The office is a museum of some sort where lovers and fans of music from that era can visit for a nostalgia trip.

The shining stars of those eras include Victor Olaiya and Chris Ajilo who were among the musicians that performed at the Independence Day celebration in 1960; Ebenezer Obey and King Sunny Ade. Bobby Benson and his highlife band also had a huge following, while Rex Lawson spread his message of peace during the Biafran war in the East. Haruna Ishola promoted the Apala music style.

More sounds will emerge in the music scene later such as the legendary Afrobeat credited to Fela Anikulapo-Kuti, afro-juju music style formed by Sir Shina Peters and the list goes on.

Of these music stars, only a few are still alive to witness the 59th Independence anniversary of Nigeria. They include:

Victor Olaiya: He is known as the evil genius of highlife music. Olaiya burst into the music scene in the 1950s and 1960s. He is the only Nigerian musician to ever earn a platinum record. A trumpeter, Olaiya is still renowned for hits such as ‘Africa’ and ‘Baby Jowo’. The latter was remixed in 2013 by 2Baba who also featured him. Prior to his retirement in 2017, Olaiya held gigs at his Stadium Hotel in Surulere.

King Sunny Ade: At the grand finale of Ariya Repete 2019, King Sunny Ade showed his stagecraft when he took on a challenge with Nollywood actor, Odunlade Adekola. He wowed the audience with his energetic dance moves. At 73, Ade is still one of the artistes of that era in high demand. A multi-instrumentalist, he started his musical career as a member of Moses Olaiya’s highlife band, Federal Rhythm Dandies before setting out on his own in 1967. He gained international repute in the 70s and 80s, touring America and Europe. He is today known as the king of Juju music. His popular hits include ‘Private Line/365 Is My Number’, Omode o Mela/Ja Funmi’ among others.

Victor Uwaifo: Victor Uwaifo wears many creative hats. He is a sculptor, a music instrument inventor, musician, and writer. The 1960s star is renowned for his unique ear for beautiful sounds of music. A former member of Victor Olaiya’s band, Uwaifo developed his own sounds such as Akwete rhythm sound and Shadow beat. He has also served as the commissioner for Arts and Culture in Edo State during former governor Lucky Igbinedion administration. His popular hits include ‘Guitar Boy’, ‘Joromi’ and ‘Mami Water’.

Ebenezer Obey: In his heydays, he went by the moniker Chief Commander, and together with his band was known as International Brothers. A conservative Christian, Obey honed his musical career at the feet of the late Fatai Rolling Dollar. A juju musician, he also experimented with talking drums and guitars. Though a setback in his eyesight truncated his musical career, he is still one of the revered musicians in the history of music in Nigeria.