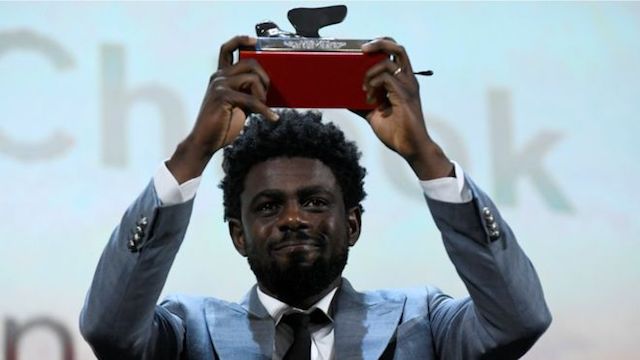 Benson made history on September 7 at the Venice International Film Festival when he became the first African to win the prestigious VR award for his virtual reality ‘Daughters of Chibok’. His win has placed him in the limelight. Vanessa Obioha writes about her recent encounter with the young filmmaker

The ambience inside the virtual reality lab of the Facebook NG Hub in Yaba, Lagos was exhilarating. Not even a downpour could douse the mood of the young individuals inside the lab. Some were seated in groups and others stood, all chatting. The camaraderie was infectious. Everyone knew each other and expressed a certain degree of enthusiasm that could only suggest a celebration. Inside one of the adjoining rooms in the lab sat Joel Kachi Benson, the first African documentary filmmaker to win the prestigious Virtual Reality award in the just-concluded Venice International Film Festival. He was dressed in black jeans and a t-shirt. His short black spiky dreadlocks highlighted his youthful look. He swivelled in the seat, maintaining a calm and collected disposition as if he was unaware of the buzz around him.

Of course, he knew everyone was there for him. Since he won the award, he has been inundated with calls and messages from well-wishers and prospective collaborators. There were also requests for interviews from both local and international media houses. His name seemed to be on everyone’s lips. On Twitter, there was a debate on his provenance. People wondered if he was a Nigerian, and if Nigerian, what part of the country was he from. The limelight was suddenly on him. He had just returned from a trip in Abuja that morning to join his friends at the lab to mark the outstanding milestone. He has not been able to catch some sleep. He would later tell his friend and supporter, Judith Okonkwo of Imisi 3D that he felt his head was padded with cotton wool.

Despite the stress, Benson would never have missed the celebration for anything. They were part of his success story. In December 2018, Benson screened his first virtual reality film ‘In Bakassi’ to a motley audience. That screening took place at the hub and Okonkwo moderated the question and answer session. Virtual reality films were relatively new to the audience but they were impressed by its immersive state. They travelled with Benson into the simulated 3-D Bakassi Internally Displaced Persons (IDP) camp in Maiduguri. They walked with Modu Mustapha, the subject of the documentary as he tried to survive in an environment that reeked of hardship and frustration. They felt his trauma when he relayed the heart-rending moment his father was killed in a suicide bombing. His mother absconded after that terrible incident and Mustapha was left with the responsibility of catering for his younger siblings and aged grandmother.

“As a storyteller, you want to get to the root of the matter, and that was my main attraction to doing a story on Chibok, to find out the truth for myself. Were these girls really abducted? Does this place called Chibok truly exist? It was a story that I have always been curious about. And I also wanted to make it in VR because for me, with VR, I can take people to Chibok,” he said.

The result of his curiosity was the award-winning ‘Daughters of Chibok’, a gripping tale about Yana Galang whose daughter is among the kidnapped girls that were abducted by the insurgents Boko Haram in 2014. The 11-minute film mirrors Galang’s pain as she hopefully awaits the return of her daughter. The documentary was first screened to the public on April 14 at selected Lagos Parks and Gardens across the state to commemorate the fifth anniversary of the girls’ abduction. It has since had private screenings at the British Council, Lagos and Ventures Park, Abuja.

In one of those screenings, Yana was present. The film was also made possible through the support of the Northeast Humanitarian Innovation Hub. ‘Daughters of Chibok’ turned out to be the only VR film in the continent that was selected to compete in the linear content category of the Venice International Film Festival. A total of 12 VR films were selected from around the world. The win came as a surprise to him and to Yana. He recalled that he spent the next couple of hours preparing his speech. He was even more humbled to be in the same room with some of the biggest names in the film industry globally.

The young filmmaker was not only enthusiastic about his trailblazing victory as the first African to win the prestigious award but was proud that his success was a validation that young filmmakers like him can use the new technology to tell amazing stories. This was the kind of inspiration the young and hippy audience that rainy Saturday needed to hear. They were curious about him, his work, and how he sustained his passion. It would have been easy for Benson to attribute his success to diligence.

As a young man, Benson was crammed in a one-room apartment with his siblings and mother. His parents had split and the mother was left to provide for them. He had friends who were into cybercrime. This was when the internet was still a luxury and the only way one could access the internet uninterrupted was to go to a cybercafe. While his friends looked for gullible victims online, Benson spent his time searching for famous and successful documentary filmmakers, new technologies in filmmaking, international film schools and any other knowledge that will enhance his skills in documentary filmmaking. At a point, his friends mocked him, asked him to stop wasting his time on documentaries. But the filmmaker will not relent.

He knew what he wanted and was bent on achieving it. His mother’s untimely passing halted his dream. He could not afford to go to university so he decided to try his hands on music with his brothers. Luckily for him, a sponsor saw their potentials and decided to help them financially with their studies abroad.
On getting to London, Benson reignited his passion for film and studied at the Central Film School in London. In the last decade, he’s been making documentary films for corporate clients, travelling to different parts of the world and currently runs his own multimedia and VR360 company. In 2017, however, he was introduced to virtual reality by a friend who told him about it. He didn’t really pay attention to him until a year later when a lady, Damilola Ogunbiyi commissioned him to make a 360 video of a project in Kano.

“I told her I don’t make such videos but she insisted that I figure out how to do it. Out of respect, I agreed to carry out a research. But I remember one thing she said to me as I was leaving her office that day, she said: ‘I want you to explore this. It will change your game.’ I went back home and I started researching about virtual reality, 360-degree video and all of that. The more I researched it, the more I was intrigued. I went on YouTube and I saw videos in VR. I was really intrigued by it. I searched for anyone who was already into VR in the country but couldn’t find any. So I decided to travel abroad and learn how to use it to create this video for the client.

“I flew to the States, and that was the first time I wore a headset; I understood what that guy was telling me in 2017. It was like I was there. I think the first piece of work I ever saw in VR was a concert by Coldplay, and it was like I was at the concert; it was a different experience. I understood then what the guy was saying about being able to transport people to different places,” he explained.

Notwithstanding his doggedness to be good at his craft, Benson believes that his late mother’s prayers were responsible for his success.
Benson explained further, “I recall her waking up in the middle of the night praying for us. She would rub anointing oil on our foreheads and proclaim that we will never disgrace her, that we will always be successful. Her prayers I will say is the secret behind my success.”

Still basking in his win, Benson has however not abandoned his initial objective when he made ‘Daughters of Chibok’. His aim was to support women financially and emotionally. He wanted the film to draw attention to the plight of the women who are mostly living in poverty. This he made clear in his acceptance speech at the award when he reminded the world not to forget the daughters of Chibok.

“Everybody kept saying thank you for reminding us. It was interesting. I had people from Taiwan, Korea, Brazil, Australia, all over the world congratulating me. Everybody from across the world had heard about Chibok, they knew about Chibok, but like what the women said, “Some of them had forgotten.
“So, the film served as a reminder and everybody seemed grateful about that – the opportunity to remind them. And not just remind them, but to take them there,” the young man from Umuahia state said.