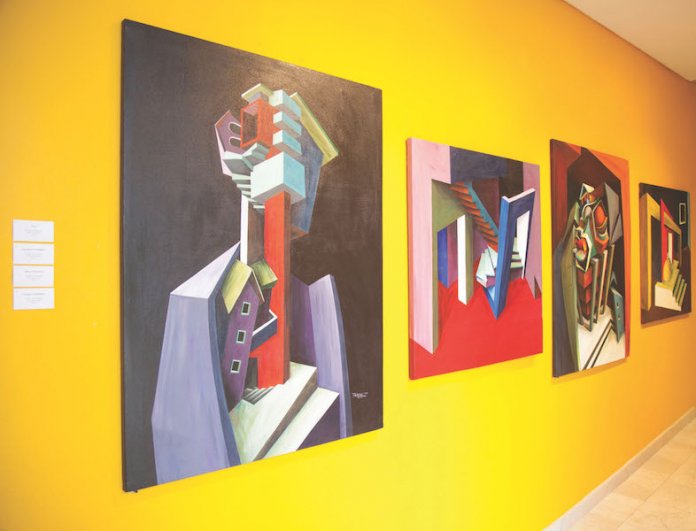 I
n 2016, Patrick Akpojotor shot into the limelight when he won the first ever Access Bank Art X Prize. Prior to that, he was known within the art community as one of the most promising young contemporary artists in Nigeria who has enjoyed some tutelage with Prof. Bruce Onobrakpeya as a studio assistant. He had a strong art background with rich foundation in Fine Art at the Auchi Polytechnic, where he graduated in 2008.

His latest body of works can be found at the Wheatbaker Hotel, Ikoyi where these tasteful pieces add some warm spectacle to the inviting ambiance. During a press preview of the works, the curator, Sandra Mbanefo Obiago spoke glowingly of Akpojotor’s artistry of which she has been a keen follower for over a decade.
“His years of working with Prof Bruce Onobrakpeya has given him a deeper understanding of what it is to be an artist who has excellent work. As a curator, it is always so refreshing to find this kind of talent. Patrick does all sorts. I have seen his wood work, paintings sculptures over the years,’’ she began. For others, walking around the works provided the rare opportunity to engage the artist on the underlying issues raised in the works.

It is inevitable to be reminded of the popular song by Celine Dion titled, “If the Walls Could Talk’’ when you spot the theme of this debut solo exhibition. Called, “If Walls Could Speak,’’ it parades 38 oil paintings, pencil sketches, seminal works in wood, and an installation of copper sculptures, which represent the artists’ exploration of our subconscious connections between identity and the built environment.

To be sure, in 2016, Akpojotor had an unforgettable experience. He was deeply disturbed by the forceful ejection of residents of the waterfront slum community of Otodo Gbame in Lekki, that left thousands of people displaced. Through his paintings and wood sculptures, he vented his anger and frustration through buildings with human features and emotions that he created through his art work.

They became his signature technique. The anthropomorphic structures with their cubist geometry, perspective, balance, and form, were his creative response to the realities of mega-city population pressure. His imagined structures and abstract compositions interrogate our sense of rootedness and belonging. It was this important body of work that earned him a top spot at the Access Bank Art X Prize later that year.

As Obiago rightly observed, Akpojotor’s works are pressure cooked by his environment, marked by over-population, congestion, chaos and more.
“I think what makes this body of works extremely timely is the fact that we are living in a very chaotic extremely populated, badly designed city of over 22 million people,” the curator said.

The curator added that the show features works from the last three years. For the first time, the artist is presenting these wooden sculptures. Married to an artist, Akpojotor’s household is entrenched in art. With experimentation, he has developed a variety of pieces that in some parts pay homage to and immortalize people like the selfless medical doctor, Dr. Stella Adadevoh whose effort contributed to halting the spread of Ebola in Africa’s most populous nation. In the work titled, “The House Stella Adadevoh Built,’’ the artist draws upon the virtue of integrity.

“Akpojotor’s works stimulate us to a refreshing experience of the artist’s intuition, childhood, the search of identity, adventure and romance with space,” Professor Jerry Buhari, art critic and Professor of Fine Arts at Ahmadu Bello University remarked.
If Walls Could Speak is supported by Louis Guntrum wines. It is open to the public till November 8, 2019.