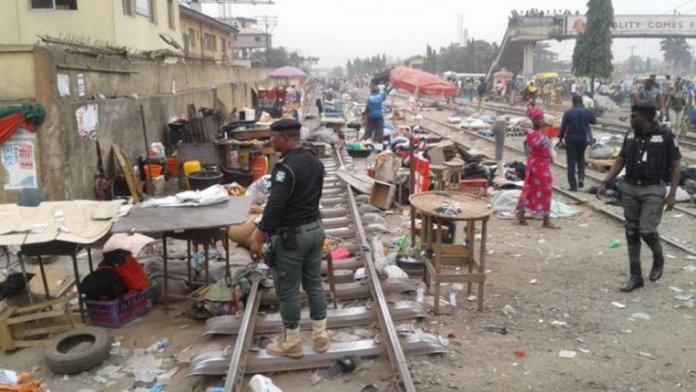 In a bid to prevent avoidable loss of lives, the Ekiti State Government has unfolded plans to relocate traders plying their trade on major highways and roads to designated markets.  The Deputy Governor, Chief Bisi Egbeyemi disclosed this yesterday, at separate meetings with market women leaders, Ohanaeze Ndigbo with some representatives of Igbo traders in his office in Ado Ekiti on Friday.   In a statement by Odunayo Ogunmola, the Special Assistant on Media to the Deputy Governor, he explained that government was concerned about the safety of traders carrying out the their businesses on highways, road medians and roadsides noting that the move would prevent disasters and provide environment conducive to them.  The Deputy Governor explained that the administration of Governor Kayode Fayemi was determined to fulfill the electioneering campaign promises made to market women and Igbo traders during the election period.

Egbeyemi said, “One of the things we promised you is market, you asked us to give you a market, the Governor wants to satisfy all of you, we will not only give you stalls, we are going to empower you  and when the time comes we will want you to show interest.”

Expressing displeasure at the incessant display of wares on main roads by some traders in Oja Oba, Old Garage, Okeyinmi, and Okesha in Ado Ekiti, Egbeyemi maintained that the plan to move them to designated markets in the State became necessary not only to avoid inconveniencing other road users but to forestall accident in the future.

The Deputy Governor revealed that he and his team would on Thursday pay an assessment visit to Ilawe Road Market, Agric Olope Market, Oke Ila Market, Okesha Market and Awedele Market, to assesses the suitability of those markets for the traders.

Egbeyemi assured that the government would make the places allocated to them conducive for the sales of their goods and wares.

Egbeyemi also mentioned to market women leaders that government was already working on the faulty part of the structure of Erekesan market and would soon be completed for allocation to accommodate more traders in the State.

He said further: “The reason we called you is because of our market, Governor has said he doesn’t want people to display wares and good on the roadside, he wants Ado to be seen as a modern town, we want individual sellers to have their stalls. As market leaders we want you to sensitize your followers on this.

“You will soon move to Erekesan Market, it would soon be completed, there are many faults in the building, but we have made the necessary correction but the plan on ground now is to move traders to Agric Olope Market, Awedele Market, and Ilawe Road Market.”

Egbeyemi warned that the full weight of the law would be visited on defaulters after the government might have made all the necessary provision for them in places where they can go about their daily business.

Earlier the Commissioner for Lands, Housing and Urban Development, Mr. Adewale Febisola said the government had taken a position on the roadside sellers and would no longer tolerate those who faulted the directives according to the dictates of the law.

In their responses, the president of Ohaneze Ndigbo in Ekiti State, Mr Alex Ndubueze, and the spokesperson of the market women, the Iyalaje Alaso in Ado Ekiti,  Mrs. Adefunke Ogunrinde, commended the state government for the move, promised that their people would comply with the directive.