One of the significant (defining) attributes of the 19th century history of the Yoruba was the Afonja (the 6th Aare Ona Kakanfo of the Oyo Empire) rebellion. The historical epoch encompasses a century long internecine wars and disintegrative sociopolitical implosion-culminating in the collapse of the empire. The era was uniquely marked by a striking contradictory pair of good fortune and misfortune for the Yoruba-as represented in the loss of Ilorin to the jihadist imperialism of the Sokoto caliphate on one hand and the defeat of the caliphate army at Osogbo in 1840 on another. Were there to be a contrary outcome of the latter encounter, it would have resulted in the probability of a blanket spread of the Ilorin type vassalage over Yoruba land. In such eventuality, the Yoruba traditional monarchical culture would have given way to the supplantation of the pseudo Islamic theocracy of the Sokoto caliphate. This was the ultimate objective embedded in the often iterated vision of dipping the Koran in the sea (the Lagos Atlantic seaboard).

The received wisdom on the Afonja rebellion was its negative utility as a cautionary tale on the Yoruba propensity for self-destructive intra mural supremacist struggles. It was a complex and complicated power play that transcends the simplistic reduction into the Judas Iscariot archetype portrayal of Afonja. For the two protagonists (Alaafin Aole and Afonja), it was as an engagement of mutually assured destruction. If we want to personalize the collapse of the Oyo Empire (to which the loss of Ilorin was integral) and shop for whom to blame, we can certainly do a lot better than Afonja. Of greater consequence was the Alaafin Aole, who, in the final analysis, was (like Afonja) little more than the handmaiden of a history that overwhelmed the duo. For all his notoriety, Afonja was equally no more than a scapegoat for the imminent tragic fate of Ilorin.

In the circumstances of the pervasive and boundless anarchy let loose on the realm it is no exculpation to wonder whether an otherwise dutiful and patriotically disposed Afonja could have averted the imperialist incursion of the conquering caliphate army. Afonja was a catalyst not the precursor of the tragic fate that befell Ilorin and the Oyo Empire. Nonetheless, as Kakanfo, in whose custody the safety and security of the realm was entrusted, Afonja cuts the ironic figure of being a facilitator of the breakdown of law and order. But (understood as deliberate connivance with the external enemy to subvert his homeland), Afonja was not a sellout. He was just too absorbed in licentious warlordism to care or recognise the potential prohibitive cost of his folly. His criminal proclivities approximate the classification of amorality rather than immorality.

In the fullness of the historical tragedy, the greater culprit whose villainy and venality tended to get obscured and diffused by the exaggeration of the culpability of Afonja, was Alaafin Aole. As Prince and King, they don’t come more perverse and depraved than Aole but he was a symptom not the cause of the cancer that had already eaten deep into the body politic of the empire. In the predisposition towards wanton villainy and consequential degradation of their homestead, there is little to choose between Alaafin Aole and Afonja. Overtime, the duel (between the two) has been pressed to serve the cause of a one size fits all explanation and interpretation of all appearances of Yoruba made political rebellion.

Factually, Afonja was the rebellious Are Ona kakanfo whose revolt against Alaafin Aole (of the Oyo Empire) played into the chaotic implosion of the Oyo Empire and rendered it vulnerable to external aggression. Afonja then became a victim of the vulnerability he helped fomented when his Fulani allies turned on him. He was vanquished, had his suzerainty over Ilorin expropriated and incorporated into the Sokoto caliphate. Regardless of the significance or insignificance of his accessory, the loss of Ilorin remains an exorbitant price to pay for the indiscretion of a rogue Field Marshall but the Afonja betrayal metaphor is in large part a misrepresentation of history. The original sinner was Alaafin Aole himself who should be deemed the worst adversary of the Yoruba-on account of his dying wish for their eternal damnation as captured in the following pronouncement;

“My curse be upon you for your disloyalty and disobedience. So let your children disobey you. If you send them on errand, let them never return to bring you word again. To all the points I shot my arrows will ye be carried as slaves. A broken calabash can be mended but not a broken dish; so let my words be irrevocable”

It was Aole himself who set in motion the chain of events that consumed both of them. He lived in dread of the larger than life profile of Afonja and sought to get rid of him through subterfuge. Whenever the king directs the kakanfo to go to war, the latter has no option than victory-as the penalty for failure is death. At the institution of the Aare Ona kakanfo title by Alaafin Ajagbo in 15th century, he named two cities as forbidden territory to the kakanfo, Ile Ife and Iwere Ile-the birthplace of the his mother. Not only was Iwere Ile consecrated as forbidden, the city itself was a natural fort rendered near impregnable against external assault. Of all possible targets, this was the impossible choice Aole made for his Kakanfo. It was as clear as daylight that this was intended as a suicide errand. Not surprisingly, Afonja refused the errand and took the battle back to the Alaafin. In conspiracy with the principal Oyomesi title holders (whose collaboration effectively sealed the fate of Aole), Afonja invited Aole to regicide. Thus fatally isolated, the ill-fated Alaafin proceeded on his final suicide rites but not before pronouncing his infernal satanic curse on the Yoruba heritage.

History, remarked the muse, repeats itself first as tragedy and subsequently as farce. And so has it become with the recurrent historical recall of Afonja of Ilorin. The name has evolved to become a corporate identity for betrayal and disloyalty within the context of Yoruba leadership disputation. Contemporaneously, It resonated loudly in the Action Group (AG) factional crisis that ensued in 1962 which subsequently played out as a fight to the finish between Chief Obafemi Awolowo and his deputy Chief Ladoke Akintola. Unlike Akintola, Afonja did not seek external collaboration to wage war against the Alaafin and supplant his leadership. The collaboration he sought was aimed at mercenary expedition and plunder. The analogy is further contradicted by the fact that in perception and substance, Awolowo did not correspond to Aole. One was deemed a martyr and the other a villain. The Afonja metaphor had endured a long list of perfunctory misapplications-as was the case with Bola Ige, Bola Tinubu and lately Professor Banji Akintoye-the most farcical of all. It was a comedy of errors.

The penultimate instance of the distinguished Professor is too banal and brazen to warrant the Afonja analogy. It was uniquely superfluous and disappointing. Here was a Regent Royale within the firmament of Afenifere/Yoruba leadership authenticity renouncing such honorable heritage for a 419 crown. As the Yoruba would say, won fi e joba, o tun wa Oogun awure (you are conferred with the honor befitting a king and you are still looking for good luck charm). How do you even fancy yourself as Yoruba leader where your electoral college consists of “the Baale of Ekotedo, Chief Taye Ayorinde; Chief Deji Osibogun; members of the Oodua Peoples Congress (New Era); Oodua Redemption Alliance; Majiyagbe Oodua Vanguard, and Awari Omo Oduduwa”.

I now leave you to make sense (if you can) of the rationale and wherewithal of the ‘election’ of Akintoye as Yoruba leader by the main promoter and proponent of the project, Akogun Tola Adeniyi. All I will urge you, especially, our dear Professor Akintoye is to beware of individuals acting more catholic than the Pope and Greeks bearing gifts.

“I take exception to some people querying the calibre of people that nominated Akintoye? The man behind the gathering is about 61 years old. Victor Taiwo is not a small boy; he is over 69. Osibogun is 65. George Adesokan is 62 or 63. So, what are you talking about youth? These are elders of Yoruba land in their own right.

“Fasoranti is the leader of Afenifere, which is one of the several socio-cultural organisations in Yoruba land. Though, it is the foremost organisation that has represented the Yoruba at several fora does not mean Fasoranti is the leader of those who do not belong to Afenifere. We should make that distinction. To buttress my argument, Akintoye was in Pa Fasoranti’s house over the weekend last week in Akure and he went in the same flight with Adebanjo. This was after his (Akintoye’s) election. There is no division at all; they were altogether in Akure. So, we still believe that Fasoranti is the father, to a large extent, of the Yoruba leadership. There is no way Akintoye will be leader of Yoruba nation without deferring to Pa Adebanjo or Fasoranti”.

“There should be a meeting of all the 318 socio-cultural groups in Yoruba land, without leaving out the young ones. The future of Yoruba lies with the youth. He should reach out to the leaders in political parties, commerce, finance and banking, medical sector and others. We expect him to reach out to all leaders. He should have a council of elders and leaders of thoughts. But more than any other thing, he should chart a way forward for the Yoruba. Are they going to go out of Nigeria or defend themselves, because they are being attacked everyday? Are they just going to fold their arms and allow themselves to be overrun or are they to cry out to the international community and tell the world that the Fulani have descended on Nigeria to take our patrimony and send us all to the sea, and create a refugee crisis that will be the greatest in history?”

STOP PRESS-By the way if you are looking for a character witness on Uncle Tola Adeniyi, I refer you to Pages 103-105 of the Memoirs of Chief Cornelius Adebayo 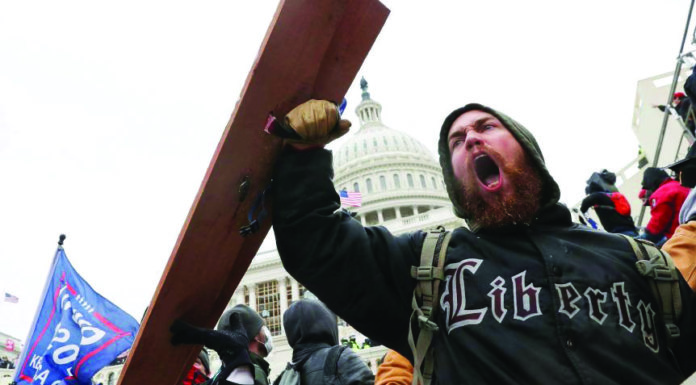 #EndSARS and Pro-Trump’s Protesters Compared: Coup-making and the Challenge of International Responsibility