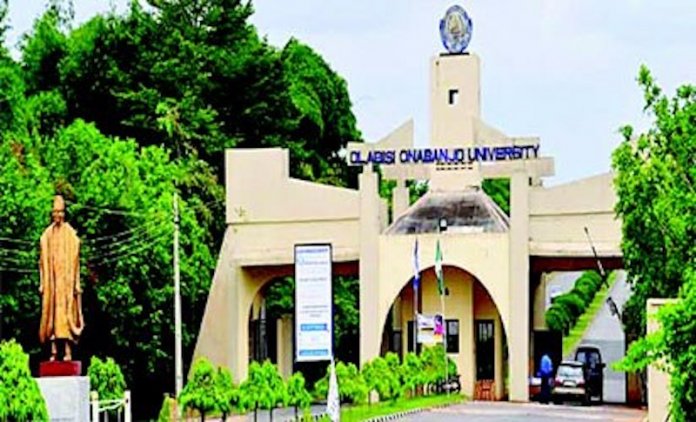 In this report, Funmi Ogundare, who visited the Olabisi Onabanjo University Teaching Hospital, Sagamu, Ogun State, writes that the ailing state-owned tertiary institution requires a lot of efforts and facilities by the current administration to regain its past glory

The Olabisi Onabanjo University Teaching Hospital (OOUTH) was established on January 1, 1986 to provide clinical facilities for the training of medical students, in conjunction with the Obafemi Awolowo College of Health Sciences (OACHS), Olabisi Onabanjo University (OOU), and for the provision of tertiary healthcare services for the people of Ogun State and the country at large.

The immediate objective of the caretaker board was the refurbishing, restoration, equipping and updating of the physical infrastructure of the institution and the introduction of a new administrative system to meet the demands and requirements for the accreditation of the newly-established teaching hospital by the Medical and Dental Council of Nigeria (MDCN).

However, over the years, the institution’s facilities seem to have witnessed a decline due to lack of funding and adequate training and remuneration of doctors by previous administrations that paid lip service to the institution which used to be rated as one of the best in the country by watching it degenerate without an alternative means of replacement. As it is, the institution seems to have become a shadow of itself and almost a death trap.

On his assumption of office in June year, Governor Dapo Abiodun visited the institution to inspect the facilities in place and expressed shock and disappointment over the deplorable condition of the hospital known as one of the best medical facilities in the country, but now turned sub-standard.

He said the teaching hospital was unfit to churn out qualified competent medical doctors, considering the institution’s deplorable state, which required urgent attention, adding, “most of the medical equipment are obsolete and others not functional.”

While speaking with journalists shortly after the inspection, Abiodun explained that the visit was informed by his earlier meeting with the health management authority of the institution, adding that this followed a report that he got about the position of the hospital, being the only teaching hospital in the state.

He said he would soon set up a team after a final report from the medical director to restore the lost glory of the hospital and stressed that his administration attached paramount importance to the health sector with an assurance to turn round the institution for better.

“I am putting up a team after a final report from the medical director. I don’t see how this place can produce good doctors; we shall go back to the drawing board. The institution is substandard and in depressing state. We shall look into facilities and personnel.”

Already, an administrative nine-man committee had been set up to look into the remote and immediate causes of the challenges facing the Olabisi Onabanjo University Teaching Hospital and in line with its interim recommendations submitted, the governor had approved the immediate recruitment of resident doctors, nurses, pharmacists, laboratory scientists and all other categories and cadres of healthcare professionals.

He ordered that advertisement should be immediately rolled out in all departments where manpower shortage exists, adding that recruitment should take immediate effect.

The committee chaired by the Chief Medical Director of Reddington Hospital, Dr. Yemi Onabowale, advised the government to recruit competent medical doctors to fill all the manpower shortage at the teaching hospital.

While inaugurating the committee, the governor charged members to assess the operational modalities of the hospital and to suggest how to improve the standard in line with acceptable universal standard for medical training, research and tertiary health care services. The committee was also charged to determine the state of facilities of the various units and departments and make recommendations to the state on the steps necessary to ensure sustainable operations in the institution and determine quick wins and palliative actions to stem further degeneration of the institution and facilities.

Other terms include reviewing all third party arrangements in the institution, including the Private-Public Partnership (PPP) and other services provisioning arrangement and determine their level of compliance at the time of that engagement and with the efficacy but more especially suitability for the intent of the state government; reviewing and recommending programme and strategies to ensure that the operation of the hospital is self-sustaining and financially independent; as well as reviews that will be critical to the long-term sustainability of the image and productivity of the institution.

During a visit to the institution to ascertain the level of decay of the facilities, THISDAY discovered that the wall into the entrance of the Daniel Akintonde Modular Theatre inaugurated on September 15, 1995 by the former Military Administrator, Lieutenant Colonel Daniel Akintonde, has caved in and almost giving way.

It has no working medical equipment for accident victims, besieged with shortage of staff, insufficient testing kits, and a near-dead maternity ward.

He said the rot was a systemic failure, adding that since the governor has already gone round to inspect the facilities himself, he should be able to do the needful.

“Unfortunately, the rot didn’t start during Abiodun’s administration, neither did it happen when the chief medical director came on board.”

He described the facilities as far below expectation which affects the doctors. “There is no appropriate training for doctors here and a holistic diagnosis for patients. The hospital’s internally generated revenue has also reduced,” he said.

He expressed concern about the exodus of Nigerian doctors who seek greener pasture abroad saying, “the exodus won’t stop. The pay is very poor here. For some, it is not the pay, but the quality of life for the doctor and his immediate family. There is also no facility to train the best of specialists and there is no adequate security even as a life saver.”

A top official in the institution, who preferred anonymity, corroborated Ajose, saying, “OOUTH used to be rated as one of the best in the country. The decline was on the part of previous governments. Some of the good hands that we had retired, but were not replaced because the government was looking at the wage bill and other cadres of staff. The subvention was not also forthcoming.”

He regretted the poor funding of the institution, saying that though staff salary is being paid, the capital budget that should have been released to upgrade facilities was not forthcoming.

“Our recurrent maintenance fee was rising. The generators, sphygmomanometer and other equipment are obsolete and dysfunctional and not replaced. Some are irreplaceable for clinical service delivery, training and research are suffering. I have had to rely on IGR to sustain the project.”

He said the institution needs a robust budget and a complete overhaul of the system to be able to attain its old glory.

On the exodus of Nigerian doctors abroad, he said the government should ensure that the facilities and income of doctors should be as competitive as what obtains abroad; this he said will make them stay at home to practice.

“When I joined as house officer in 1985, I did not have to think of travelling abroad, life then was cheaper, there was adequate power supply, doctors were motivated and the resources to train them were as comparable to what we have in the UK.”

He argued that there was nothing bad about doctors going abroad to seek greener pasture, saying that aside the fact that the government cannot absorb the teaming medical officers, the country has not developed its resources to what is obtained in developed countries.

“There have been many breakthrough medical exploits, but our own is still as it is 50 years ago. The doctors going abroad want to gain knowledge and be happy with the practice. We have become poorer in terms of resources and economy. The money we are earning has lost value.”

He said corporate organisations, churches and individuals have been supporting the institution in one way or another, however, the management has made recommendations to the government to do what is obtainable in federal teaching hospitals so as to boost the capacity of medical officers.

In a telephone conversation, the Chairman of the Nigeria Medical Association (NMA), Ogun State branch, Doctor Ismail Lawal disclosed to THISDAY that a transition committee on health has been created by the current administration which mandated the association to chronicle what is needed for the institution to function.

“The governor had a meeting with us two months ago and said there is need for urgent intervention, apart from recruitment of personnel, the building and facilities are nothing to write home about. When you call a place a teaching hospital, you expect something higher than primary and secondary level of health care. It cannot boast of the kind of facilities that private institutions have.

He also disclosed that the process of recruitment of doctors has started, adding that interviews were conducted on September 19 and the doctors are expected to resume work this week. “The interview for resident doctors will take place this week also. We also hope that other cadres will be brought in. At the level of personnel, the remuneration is another issue, we are still on it. Hopefully, before the end of November, we should be able to resolve it.”

Lawal said the administration has promised to improve on the issue of remuneration due to the gross shortage at the personnel level, adding that without which, bringing in people might not be that easy.

“The problem there is that if you employ somebody today and he checks out another place that payment is higher than what you are going to pay, definitely, he would leave and go to the next place. As a matter of fact, we took it upon ourselves to discuss with people one on one and very soon, remuneration will be improved upon and that is what we are trying to resolve.”

The chairman also emphasised on the issue of staff welfare saying, “when you improve on staff welfare, they will be willing to make things work. We have a pathology unit without eco machine. We are working towards the issue of facilities, if someone has an accident along the way, they will bring the person to OOUTH, if someone has a fracture, we should be able to resolve the problem. These are the things we are expecting.

“With the way the governor is going, very soon things will get better. Unfortunately, the IGR cannot cater for the needs of the institution. The government has social responsibility; health and education are social responsibilities, unless you want people to suffer.”

Falana to Sue FG over Tenure of Service Chiefs