In a Move That May Prevent Vote Buying, CBN Sets New Withdrawal Limits 7 hours ago

Tinubu: How I Made My Money, I’m Not Denying My Wealth 7 hours ago

Group Seeks Collaboration for Christians to Participate in Governance

The xenophobic violence that engulfed parts of South Africa in late August and early September this year may have subsided but its consequences and likelihood of repeat should not be wished away.

Time has therefore come for Nigeria and other African countries whose nationals were targets of the madness to pursue long-lasting solutions that would enhance the economic opportunities and dignity of their own citizens. The Nigerian authorities will also do well to reward the patriotism of the chairman of Air Peace Airline, Mr Allen Onyema, who ferried many Nigerians back home from South Africa. In a country where help does not come cheap and where business people hardly invest in humanitaran gestures, Onyema’s sacrifice deserves commendation.

Evacuating Nigerians caught up in the nasty experience in South Africa at no cost to the public treasury is a worthy example of corporate citizenship. Other private sector leading companies should emulate this. In the absence of a national carrier, Air Peace has given these stranded Nigerians something positive about Nigeria to relate to. In other climes, those are the kinds of people who receive national honours.

That much was reaffirmed last Wednesday by the House of Representatives which received the Air Peace chairman in plenary with a standing ovation. “We hereby commend Mr Allen Onyema and recommend him to the federal government for higher honours in Nigeria,” said Speaker Femi Gbajabiamila at the session. We agree with the recommendation. Rewarding those who are making (or have made) significant contributions to our nation is not only a noble ideal, giving national honours strictly on merit will inspire the present and the coming generations to individual greatness and greater service to the country.

Meanwhile, even though the killings, lootings, arsons and chaos may have ebbed, it would appear that in the manner of the perennial attacks, the last wave ended only after spending its natural course. What that means in effect is that another round of cataclysmic bursts of hatred and destructive aggression could yet surface again. It is noteworthy that the South African envoy dispatched to Nigeria by President Cyril Ramaphosa expressed the country’s ‘sincerest apologies’ for the attacks. “The incident does not represent what we stand for,” Jeff Radebe told President Muhammadu Buhari, adding that South African police would “leave no stone unturned that those involved must be brought to book.”

While the South African authorities are walking back on the irresponsible rhetoric of some of their leaders that helped to fuel the killings, this is the time for Nigeria to begin a reappraisal of its foreign policy objectives. It is now clear that the refrain of Africa being the centerpiece of our foreign policy has outlived its relevance. A more pragmatic approach that reflects the yearnings of our people and the country’s status is needed urgently to address our external affairs deficiencies.

But not even that should be a substitute for developing the type of environment that would make travelling out for substandard jobs less attractive for our citizens. Luckily, the capacity of the Nigerian people to rise to the challenges of patriotism and nation-building is not in doubt.

This was what Air Peace airline demonstrated by airlifting traumatised Nigerians from Johannesburg to Lagos free of charge. The comment of Onyema is instructive: “We want to send a signal to the world that Nigerians are their brothers’ keepers. When I stepped inside the aircraft to welcome them (returnees), they started singing the national anthem. There was nobody there singing about separation. They felt proud to be Nigerians; they rose in unison.”

While we commend Onyema and insist that his exemplary conduct should not go unrewarded by the Nigerian authorities, it is also important that we re-examine our foreign policy thrust within the continent. 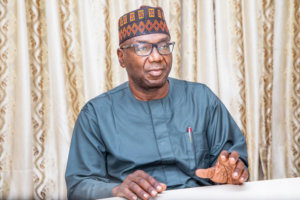