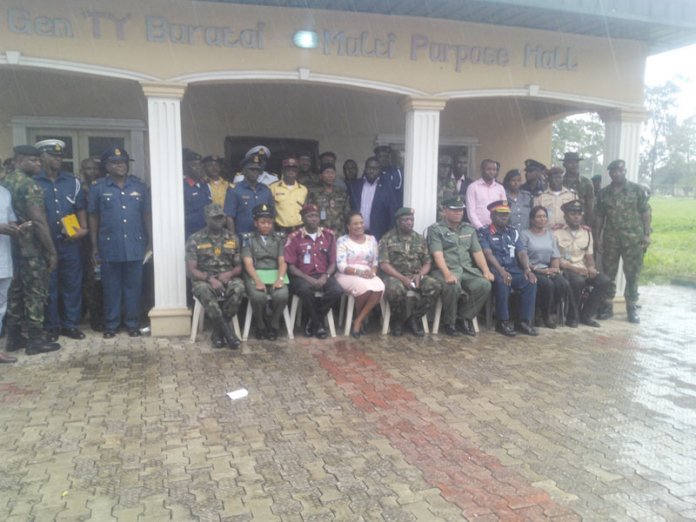 With the aim of fostering a cordial relationship between the civil populace and the military, the Nigerian Army recently organised a town hall meeting, Sunday Ehigiator reports

In this clime, when a civilian sees a military man approaching, there is usually an atom of fear. This could be alluded either to some misconceptions of the military being a brutal force when dealing with erring civilians, or actual actions of some bad eggs among the military system, that have so acted uncivilised when interfacing with civilians.

With the high rate of insecurity in the country, gone are the days when people assume that the military, especially men of the Nigerian Army (NA), should remain in their barracks, and await external war before asserting their prowess. More recently, one can see the relentless efforts of the army in the troubled North-east area of the country, with several of them continually paying the ultimate price, to keep law abiding civilians safe.

In essence, civilians cannot live peacefully without the effort of the military, and likewise, the military will be incapacitated without civilians to protect, hence the need for collaboration, respect, and love between the duo.

This collaboration was the recent thrust of a town hall meeting organised by the Nigerian Army. Themed “Fostering the relationship between the civil populace Populace and the Nigerian Army’, the meeting which was held at the 9 Brigade headquarters in Ikeja, Lagos was well attended by members of other security agencies in Nigeria such as the Nigerian Immigration Services, Nigerian Prison Services, Nigerian Customs, Nigerian Fire Services, Department of State Security Services (DSS), and Lagos State Traffic Management Agency (LASTMA), among others.

In his welcome address, the General officer Commanding (GOC), 81 Division of Nigerian Army, Major General Olu Irefin, ably represented by the Commander 9 Brigade Lagos, Brigadier General M.A Etsu-Ndagi, said the military exists only to serve the people, and to defend the country.

“Some of the modest efforts made include, the establishment of the ‘Department of Civil-Military Affairs’, in December, 2010. More recently is the ‘Human Rights Desk’ set-up under the department by the current Chief of Army Staff, Lt. Gen. TY. Buratai. He has also decentralised the human rights desk into the divisions for wider coverage.

“The efforts towards improving civil-military relationship have to be continuous for so many reasons. Among the reason is that, year in and out, we can enlist indigenes from the populace, and as such, it is important that those indigenes are oriented through programmes of this nature.

“For example, a lot of people when enlisting, and are questioned on why they want to be enlisted in the Nigerian army, they give funny response like ‘XYZ is dragging land with their family, and that is why they want to be enlisted so they can settle score and regain the land’. Unfortunately, there are a lot of civilians who think in this line. A lot of people are not aware of the efforts the Nigerian Army has made to properly orientate the minds of our personnel to obey the rule of law, and respect human rights.

“And because of these negative mindsets of theirs, they easily castigate the Nigerian Army. Hence when there are issues, rather than investigate, they are very quick to propagate because of this wrong mindset. We have a situation where a lot of people find the army as an oppressive force, which is not so. Even as I speak, there is every possibility that someone may quote me out of context, remove one word, or add another to reverse what I have said, but this is not in the interest of civil-military relationship.

“It is expected that you should love your military because a lot of efforts are being made to saddle the minds of the soldiers into thinking the way they used to think. We know that the military of those days came down from the British colonial masters. And a lot happened during the colonial rule when the colonial masters were using military for impunity expenditure and all that.

“So it would take some time, and I am sure that a lot of orientation has been done to correct the minds of the military itself. As I said, the civilians themselves need to understand all those modest efforts that have been made. We want a situation where for example, a personnel erred; which of course they can, because the army is a microcosm of the society, and we have a lot of bad eggs in the society just as we have in the Nigerian Army, we m want a situation that it could be reported after consultation with the military that ‘captain XYZ had done this or that, and the military being a discipline force, has taken XYZ action against the personnel’.

“That is better, rather than just going out to report that, ‘the army has done it again’. And at the end of the day, you find out that what was actually said wasn’t the truth.”

Addressing participants on the topic, ‘Effective Civil-Military Relations as a Tool for Combating Security Challenges’, the Guest Lecturer, Major Depriye Biambo, opened by saying if the military weren’t up to its responsibilities, “we all wouldn’t be sitting here to discourse civil-military relationship”.

Speaking further, he said, “While the primary role of the military is fighting external aggression, there are however many situations where the Nigerian Police are unable to curtail some internal insurgencies or riots, and therefore, there is the need to bring in military intervention within the country.

“Such occasion puts the military in direct contact with the community, as the rules of engagements necessarily have to change, as human rights abuses so often emanates. For example, in Lagos right now, there are situations which overwhelm them, that require the interventions from the military. And in such cases, because they already have the military out there, it is easy to intervene in such cases.

“In the course of the military’s effort to protect the populace against the actions of some troubling organisations like the IPOB and the likes, there are times that the military would be accused of abuse of human rights or whatever you call it. I want to support what the commander said earlier, that while you are reporting as journalists, you should put in mind that our duty as security agents is the protection of you the journalist, and defaulter.

“From the available records, a lot has gone sour in the divinity of the civil military relationship which needs to be corrected. Civilians must always be seen as a bunch of lawless people, who needs to be wiped back into place, however, the civil community have always not being charitable to the military, and they may have held on to the ‘civil story mentality’, this is a situation whereby, the storyteller builds his story from the ways he wants them reported rather than the facts as it ought to be.

“It is this mentality that has aided the reporting of the stories of clashes between civilian and the military, which paints the military as the oppressor and the civilian as the victim. This is what is put out as the truth. Such action sways the mind of the reader, and tilts their compassion to the weaker party, who would expect that the civil rights organisations would through up cankerworms against the military on the account of whatever abuses.

“Against this backdrop, let me put it out that all the Nigerian Army division has a human right desk, where you can go and complain that your rights have been abused against any military officer, and the military would surely take action. As I speak to you, there are so many officers in jail for just slapping a civilian.”

He however recommended that, “there should be balance for military operations, especially when we are out there. We should get intelligence and information report before responding. Prioritise the protection of innocents and vulnerable. Follow clear objectives and ensure strict compliance, strongly reprimand every military violation of rights, constantly interface with the public, and strictly outlaw any form of internal actions. There should be continued joint action with sister agencies which we have being doing for years now.”

In a brief interview with THISDAY, a representative from the Department of state Security Service (DSS), Salome Akala, said “In those days we used to think that the military is confined to the barracks, and they are not supposed to intrude into internal security matters.

“Lagos is so big that military help is needed. That is why we see them often on the streets of Lagos. And I give it to the military that they have done well over the years. They have been quite civil to an extent, especially in Lagos. I interact with them a lot, and I have seen how they work with other sister security agencies.

“But there should be more collaboration. If there is a problem, the military should be seen being impartial in the dispensation of justice. They shouldn’t be seen taking sides especially when military personnel err and they aren’t doing anything about it, it doesn’t give a good image of the military.

“The media should also help in telling the right stories about the military and paramilitary operations in the country. There is what is called, ‘pictures in the head’. The civil populace has a very strong, unbiased, and fixated mentality of about the military. It is time to start telling the right stories. They should collaborate with security operatives in telling stories correctly, because security is everyman’s business. Hence, journalists must stop being sensational.”