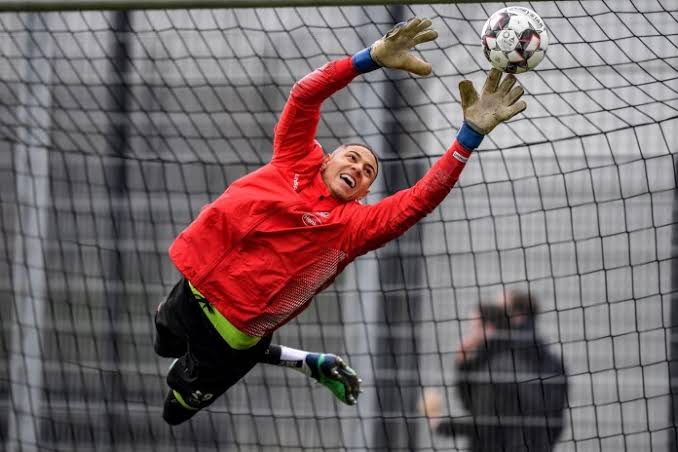 When Vincent Enyeama bowed out of international football after over a decade of manning the post for the senior national team, it was obvious he would be leaving a big vacuum. However, Carl Ikeme came in and fitted in perfectly but didn’t last long as the then Wolverhampton Wanderers FC safe hands was diagnosed with acute leukaemia in July. From then on, the post had been shared between the trio of Francis Uzoho, Ikechuckwu Ezenwa and Daniel Akpeyi, all of whom have not been convincing. Ahead of Nigeria/Ukraine friendly match, Super Eagles Manager, Gernot Rohr extended invitation to Fortuna Dusseldorf II goalkeeper, Maduka Okoye, though he did not man the post, but Rohr was convinced that Super Eagles’ goalkeeping problem is now a thing of the past

Super Eagles manager, Gernot Rohr, last week assured Nigerian football fans that the goalkeeping problem that had plagued the national team was now a thing of the past.

Since Vincent Enyeama retired from the national team, the Super Eagles have struggled to find a decent replacement, with the likes of Ikechukwu Ezenwa and Daniel Akpeyi failing to impress. Although Francis Uzoho did better than the duo when he was given the chance, his form has regressed since he moved to Cyprus due to a lack of activity at his club.

However, after switching clubs last summer, he is back playing regularly and that showed in his performance in Nigeria’s 2-2 draw with Ukraine.

With him back playing regularly and Fortuna Dusseldorf II goalkeeper, Maduka Okoye now in the team, Rohr believes the Super Eagles have solved their goalkeeping issues.

The former Bordeaux manager said this in an interview on NFF twitter handle: “Our goalkeeper, Uzoho is much better, because he is playing in his club, and even in the goalkeeper positions we had problems, but we see that, we have already the answer.”

Okoye could not hide his joy when he hooked up with the Nigeria national team players in Kyiv ahead of the international friendly against Ukraine.

The Fortuna Dusseldorf shot-stopper earned his first call up to the senior Team after Rohr released his 18-man list for the September 10 showdown with Ukraine.

“Can‘t express my feelings and how happy I am to get my first call up for the Super Eagles. All praise to the Most High ,” he said.

Meanwhile, Ikechukwu Ezenwa has stated that Maduka Okoye is a wonderful person to work with, and always want to learn just in his first spell with the senior national team.

“Maduka is a brother, a wonderful person that always want to learn. It’s always nice meeting new goalkeepers and I think he is a wonderful person, he wants to learn just like the way I was brought up in my goalkeeping career.

“I thank God he is now in the team and we are going to work together as brothers to give our best for our beloved country Nigeria,” Ezenwa concluded.

Super Eagles goalkeeper coach, Alloy Agu, has urged 20-year-old goalkeeper to wait for his time, as the youngster was an unused substitute in the international friendly against Ukraine.

Despite the concerns over the goalkeeping department in the Super Eagles, Rohr opted not to give the Fortuna Düsseldorf first choice game time.

In a bid to quell the growing frustration with the coach’s decision, Agu insists the player will get his moment.

“We can’t put everyone at the same time, it’s a gradual process and another friendly is coming up in October,” the former Super Eagles goalkeeper said.

“By his grace, we are working with all the players, Maduka inclusive; we have seen him, he has a lot of quality, we would continue to work with him and every player invited will surely get to play.”

Maduka was born in Dusseldorf, Germany to a Nigerian father and a German mother and because of his dual citizenship, Okoye is eligible to play for either Germany or Nigeria but the former Bayern Leverkusen safe hands has expressed his desire to represent Nigeria ahead of his country of birth, thus making the job of convincing him easier for Rohr and his technical crew.

On 14 October 2017, he made his professional debut in the Regionalliga West for Fortuna Dusseldorf II in a game against Wuppertaler SV, replacing the injured Max Schijns on the 43rd minute of the game. He finished the 2017/2018 season with just five appearances, conceding just one goal and keeping four clean sheets, while his club finished the season in the 15th position with 36 points after 34 games, narrowly escaping relegation to Oberliga.

In the 2018/2019 season, he became the club regular goalkeeper and on 13 April, he played his last match of the season after being replaced in goal for the next matches by goalkeeper Jannick Theissen. He finished the season with 15 appearances, conceding 25 goals and keeping three clean sheets. This time, his club did better than the previous season, finishing the season in the 12th position with 42 points after 34 games.

On 30 November 2017, Rohr talked about his plans to invite Maduka to the Nigerian national team before the 2018 World Cup, but the plans wasn’t a success.

On 22 February 2019, he was invited to the Nigeria U-23 team for the 2019 African U-23 Cup of Nations qualifier against Libya, but failed to make a debut, due to club engagement.

On 26 July 2019, Rohr, hinted that he was shifting his focus to Maduka as he looks to solve the goalkeeping crisis that has rocked his team since Ikeme quit due to illness. He was invited for a friendly against Ukraine.