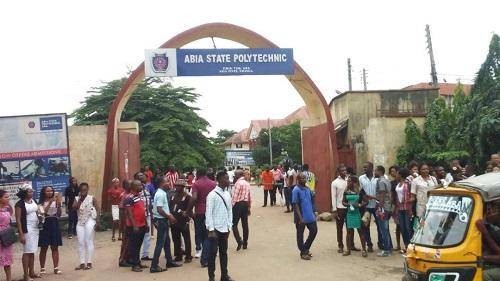 As part of measures aimed at repositioning the Abia State Polytechnic (ABIAPOLY), Aba, the management of the institution has laid off about 258 workers.

The polytechnic has been struggling to stay afloat in the past few years, weighed down by non-payment of salaries, overstaffing and dwindling student population.

In the search for a way out of the problems, series of committees had been set up in the past either by government or the management of the institution without any positive outcome.

The termination of workers’ appointments by the management was announced in a statement issued by the Public Relations Officer, Chinyere Eze, saying that the affected workers would receive full entitlements, including severance packages.

The management said the sacked staff met one or more of the criteria used in determining those to go: fake certificates, dirty files, falsification of records or retirement age.

On the issue of outstanding salary arrears, the management said the sacked staff would receive their own any time others are being paid.

It was gathered that over 600 workers were initially pencilled down for sack, based on the recommendations of the committees that looked into the myriads of problems and the way out.

However Governor Okezie Ikpeazu was said to have intervened and prevailed on the institution management to prune down the number of those to be thrown into the labour market hence the sack letters came to 258.

The Rector, Professor Ezionye Eboh acknowledged that the retrenchment of workers was “a painful exercise”, but insisted that “it is a task that must be done” to enable the beleaguered institution survive.

He said presently, workers are being owed eight months of salaries, adding that there was no way the institution would continue to grapple with the problem and still stay afloat without finding a lasting solution.

The rector stated that in carrying out the retrenchment exercise, there was no effort to victimise anybody as it was based on the recommendations of various committees, adding that both the academic and non-academic unions were carried along.

Meanwhile, the Abia State council of the Nigeria Labour Congress (NLC) has frowned at the mass retrenchment of Abia Poly workers and demanded for unconditional withdrawal of the sack letters.

The NLC regretted that the institution management had ignored its letter of approach delivered on September 5, calling for a stay of action “until we meet and dialogue on the situation on the way forward.”

The Abia NLC chairman said while the organised labour was not against the sacking of any Abia Poly staff found guilty of certificate falsification; it would not tolerate victimisation of workers.

“Where a person is being victimised for no just cause, we will stand by that person.”