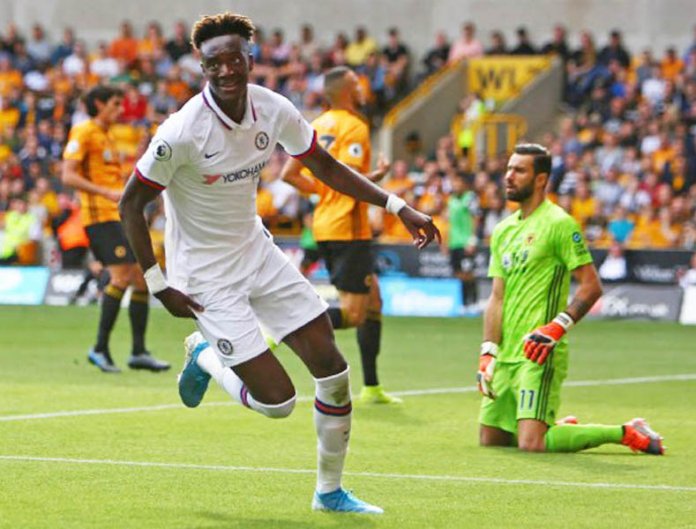 Nigerian-born Tammy Abraham continued his hot scoring streak by netting a hat-trick in Chelsea’s 5-2 away win over Wolves yesterday. Chelsea’s ‘Loan Army’ came through for them as two other youngsters, Mason Mount and Fikayo Tomori, also got on the score sheet. Tomori is another who is eligible to play for Nigeria’s Super Eagles.

Abraham struck in the 34th, 41st and 55th minutes before being credited with an own goal and then limping off.

The game burst into life just past the half-hour mark when Tomori’s dipping drive from outside the box wrong-footed Wolves goalkeeper Rui Patricio and flew into the net to give the visitors the lead.

Abraham struck his first goal three minutes later, making the most of the advantage granted by referee Graham Scott to take a touch and swivel before firing home, and he headed a second before halftime to send his side into the break 3-0 up.

The Chelsea academy product, who has spent spells on loan at Bristol City, Swansea City and Aston Villa, completed his hat-trick 11 minutes into the second half before being replaced by Michy Batshuayi after 77 minutes.

Wolves pulled a goal back in the 69th when Romain Saiss’s header went in off Abraham for an own goal and striker Patrick Cutrone bundled home another in the 85th, five minutes before Mason Mount fired home Chelsea’s fifth to complete the rout.

“I hope this is my season. I have to keep working hard in every training session, every game. Every game I want to prove myself to the gaffer,” he said.

Abraham who has represented England at junior level has refused previous entreaties by the Nigeria Football Federation to play for Nigeria at senior level, signalling his intention to represent England instead.

According to the father of another Nigerian-born player who decided to play for the Super Eagles after representing England at junior level, the NFF need to do more to convince the likes of Abraham to don the colours of their fatherland.

“These players have been treated so well by England over the years, hence their development. Even us as parents are held in high regard and feel wanted.

The Nigerian authorities need to show more desire in winning these boys over,” he said without wanting to be named.

Chelsea, who host Liverpool next week, are up to sixth on eight points while Wolves, who visit Crystal Palace looking for their first win of the season, are 19th on three points.