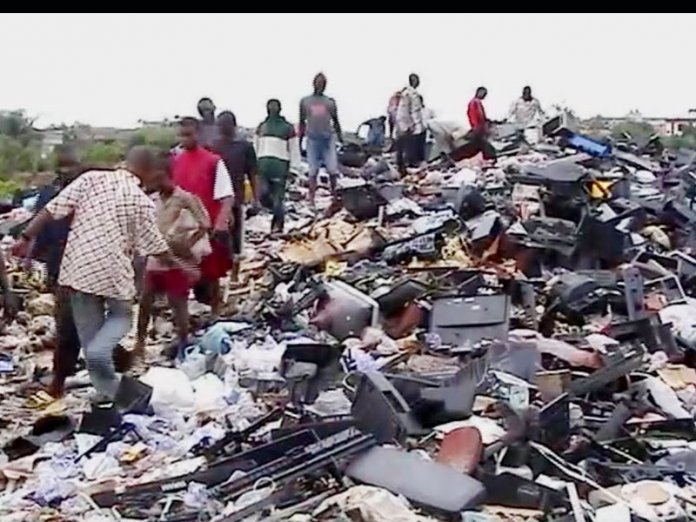 The renewed global call for electronic-waste legislation among nations by the International Telecoms Union, the United Nations agency on telecommunications, is a pointer to the fact that global e-waste dumpsites are on the increase with many dangers, writes Emma Okonji

To address the health challenges posed by electronic waste (e-waste) globally, United Nations University (UNU), the International Telecommunication Union (ITU) and the International Solid Waste Association (ISWA), the UNU, ITU, and ISWA joined forces in January 2017 and launched the Global Partnership for E-waste statistics. Its objective is to help countries produce e-waste statistics and to build a global e-waste database to track developments over time. Better data is an important step towards addressing the e-waste challenges. Statistics help to evaluate developments over time, set and assess targets, and identify best practices of policies. Better e-waste data will eventually contribute to minimising e-waste generation, prevent illegal dumping and improper treatment of e-waste, promote recycling, and create jobs in the refurbishment and recycling sector.
Despite this and other global initiatives on e-waste, Nigeria and other African countries are still faced with the rising dump sites of e-waste, which pose serious health hazards to citizens living around such dump sites.

About e-waste
Electronic waste, or e-waste, refers to all items of electrical and electronic equipment (EEE) and its parts that have been discarded by its owner as waste without the intent of re-use. E-waste is also referred to as Waste Electrical and Electronic Equipment(WEEE), electronic waste or e-scrap in different regions and under different circumstances in the world. It includes a wide range of products – almost any household or business item with circuitry or electrical components with power or battery supply.

According to a recent coalition report on e-waste, many health and environmental risks are associated with improper disposal of e-waste. Experts are of the view that the global amount of e-waste discarded every year weighs the equivalent of more than 125,000 jumbo jets. Of this total amount, 40 million tonnes of e-waste are discarded in landfill, burned or illegally traded and treated in a sub-standard way every year.

Global statistics on e-waste
Discarded equipment, such as phones, laptops, fridges, sensors, and television sets, contain substances that pose considerable environmental and health risks, especially if treated inadequately. Most e-waste is not properly documented and not treated through appropriate recycling chains and methods. At the same time, e-waste streams challenge the efforts towards a circular economy as valuable and scarce resources are wasted.

The report on Global Partnership for E-waste Statistics that was launched in 2017, represents an important step to identify current challenges and solutions. The report shows that the amounts of e-waste continue to grow, while too little is recycled. By 2016, the world generated 44.7 million metric tonnes of e-waste and only 20 per cent was recycled through appropriate channels. Although 66 per cent of the world’s population is covered by e-waste legislation, the ITU, in its recent call for e-waste legislation, stressed that more efforts must be made to enforce, implement, and encourage more countries, especially developed counties, Nigeria inclusive, to develop e-waste policies.

The report also highlights the lack of reliable e-waste data at the country level. Often, merely anecdotal evidence is available on the production, management, and recycling of e-waste, and only 41 countries in the world collect international statistics on e-waste.

Danger of e-waste
Increasing levels of electronic waste, and its improper and unsafe treatment and disposal through open burning or in dumpsites, pose significant risks to the environment and human health, according to experts, who are also of the view that e-waste also presents several challenges to sustainable development, and to the achievement of the Sustainable Development Goals (SDGs). A better understanding and better data on e-waste will contribute towards the achievement of several goals of the 2030 Agenda for Sustainable Development. In particular, it will help address the SDGs related environmental protection and health goals.

Today, a large number of the world’s population use the internet and most people in the world have access to mobile networks and services. Many people own more than one information and communication technology (ICT) device, and replacement cycles for mobile phones and computers, and also for other devices and equipment, are becoming shorter. At the same time, disposable incomes in many developing countries are increasing and a growing global middle-class is able to spend more on electrical and electronic equipment, consequently generating more e-waste. Current trends suggest that the amount of e-waste generated will increase substantially over the next decades, and that better data to track these developments are needed.

Generating e-waste
According to recent report from Global E-waste Coalition, Asian countries generate the greatest amount of e-waste and Africa countries remain the least of countries that generate e-waste, yet African countries have the highest number of dump sites for e-waste.
Currently available statistics are not able to track the amount of e-waste or used electronics shipped from richer to poor sub-regions in the world. One case study on Nigeria showed that in 2015/2016, EU member states were the origin of around 77 per cent of Used Electric and Electronic Equipment (UEEE) imported into Nigeria.

In Nigeria, there are several dump sites for e-waste, which are burnt periodically, thus showing high level of improper disposal channel of such e-waste in the country, which oftentimes, pose serious health risks to people living around e-waste dump sites.

Computer Village, located in Otigba, Ikeja, Lagos, which is the largest concentration of sales of used electronic new electronic devices in West Africa, is a typical location where electronics devices with expired lifespan are traded and most Nigerians with low income see it as big opportunity to purchase and own electronic devices because they are relatively cheap, but unknown to them that their lifespan has either expired or about to expire. The resultant effect is that the buyers will use the devices for few months and probably few years before the device eventually pickup and they are dumped at various e-waste sites scattered around the country, and eventually pose health risks to people leaving around such dumpsites, since the dead devices continually emits electromagnetic rays that are harmful to human health.

According to statistics, in 2016, Asia was the region that generated by far the largest amount of e-waste, amounting to about 18.2 metric tons, followed by Europe 12.3 metric tons the Americas 11.3 tons, and Africa 2.2 metric tons. The low collection rate compared to the total amount of e-waste generated is partly explained by the fact that only 41 countries have official e-waste statistics. For 16 other countries, e-waste quantities were gathered from research and estimated.

In countries where there is no national e-waste legislation in place, e-waste is likely treated as other or general waste. This is either land-filled or recycled, along with other metal or plastic wastes. There is the high risk that the pollutants are not taken care of properly, or they are taken care of by an informal sector and recycled without properly protecting the workers, while emitting the toxins contained in e-waste, according to expect views.

ITU Secretary-General, Houlin Zhao, in a renewed call for e-waste legislation, said: “Reliable and official data and statistics on e-waste provide the foundation for sound e-waste legislation and management at the national level.”

According to him, “To date, 41 countries report compiling comparable national statistics on e-waste. Better e-waste data will help track progress towards global ITU e-waste targets that member states have set for 2023. With its extensive private-public membership, ITU is pleased to be part of the Global E-waste Statistics Partnership, and the new portal is a vital step towards addressing the e-waste challenge.”

The Director, Department of Environment, United Nations Industrial Development Organisation (UNIDO), Stephan Sicars, said: “E-waste is a growing global challenge that poses a serious threat to the environment and human health worldwide. To minimise this threat, UNIDO works with various UN agencies and other partners on a range of e-waste projects, all of which are underpinned by a circular economy approach.”