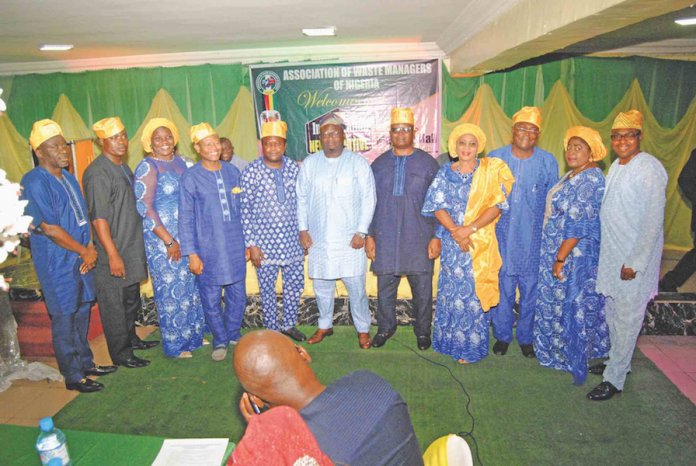 It was an afternoon of banters. Jokes and laughter filled the air among members as they trooped in from ward to ward, the operational bases of the Private Sector Participating (PSP) Waste Operators across Lagos, into the serene Mayfair Hall  on the tucked away Otunba Jobi Fele Way, Alausa, Ikeja.

The occasion was the inauguration of the new Executive Committee (EXCO) of the Association of Waste Managers of Nigeria (AWAM), Lagos Chapter, better known as PSP Waste Operators.

The election generated so much interest among members with the campaigns running along the induced polarised interest of members in the course of their recent three-year faceoff with the immediate past Government of Mr. Akinwunmi Ambode that almost saw the extinction of their businesses.

Elections over, like never before and against all expectations, members had in no time closed ranks, prepared to rally round their new executives and move on in the quest to avoid a repeat of the mistake that manifested in a gory impact on the Lagos environment they are still battling till date to completely redress, their lives and businesses.

The Special Guest of Honour, the new Managing Director of the Lagos Waste Management Authority (LAWMA), Dr. Muyiwa Gbadegesin represented by an Executive Director of the authority, Mr. Ibrahim Odumboni, who opened the floor to flag off the event, told the sprawling packed full hall of AWAM members to endeavour to see themselves as one body, trust and believe in the new EXCO while charging the executive to carry all along in their activities.

“You must try to bring all together into the mainstream of the body to work for its success with you,” Odumboni told the new AWAM Chairman/ President, Mr. David Oriyomi Oluwasegun and his team.

With the swearing in and administration of oath of office by Barrister David Fadile on the new executive over, the Chief Host of the Occasion and immediate past Chairman/President of the Association, Alhaji Ola Egbeyemi, formally handed over to the new Chairman and declared: “Positions will be held and will be left, at the beginning of the election, I made this clear, today, we are here to witness an historic inauguration.

“The contest was not a do or die affair, it was an affair to move the association forward.

I am glad, my heart is at peace not just for the joy of it but for the history-making election that has bought us to this level.

“I strongly believe that the new team will move the association to the next level. I am glad that the association has gradually moved out of the circumstances that bedeviled us in the last dispensation.

“Today, I can conveniently say that I came, I saw and I conquered. I will sincerely appeal to the new executive to mobilise all members to next level and I trust that they will do it, it is a team that has so much promise and ability, so, I am confident that they will move the association to the next level.”

David Oriyomi, the new president in his inaugural address, admitted that the election generated so much interest among members and appealed that with the election over, there was need for them to forge ahead and move the association forward.

“We must not forget in a hurry the struggle of the last three years and the impact it had on the environment, on our lives and businesses. We have every reason to thank God and the various individuals who God used to deliver the victory and restoration of our collective business.

“We cannot forget the efforts of our grand patron, Asiwaju Bola Ahmed Tinubu, the Jagaban of the Universe, we also remember the effort of the Lagos State House of Assembly headed by the Right Hon. Mudasiru Obasa, Senator Opeyemi Michael Bamidele, the gentlemen of the press and the good people of Lagos State, who stood by us in the hour of distress,”  David Oriyomi recalled of the dark hour of their struggle to keep their jobs under Governor Ambode, who was bent on replacing the over 360 operators with a foreign operator, Visionscape Solutions.

He similarly commended the electoral committee led by the Eminent Adedotun Oriowo for delivering a credible election, stating that in line with the resolution of the association, the new EXCO will organise a thanksgiving and an award night soonest.

Promising to deliver a clean and healthy environment, the association, having done it before, Oriyomi itemised the objectives of the new leadership of the association to include, consolidating on their victory, creating an enabling environment for the growth of their members, professionalising the industry, building a formidable association that would be recognised internationally and pursuing a national spread of the association.

“The state of our industry calls for a bold and swift action and we will act- not only to clean the State, but to lay a new foundation for growth. We will leverage on our numbers to enjoy the benefit of economic of scale and we will partner with other organisations to implement international best practices in our industry,” Oriyomi promised, stating that the association is committed to working with LAWMA and the administration of Governor Babajide Sanwo-Olu.

“Today, we are standing because we have chosen hope over fear, unity of purpose over conflict and discord.

“We will build good relationship not only with Government, but with the residents, we will complete the work of restoring the lost glory and take the State to greater heights,” the new Chairman declared to a deafening applause from members.