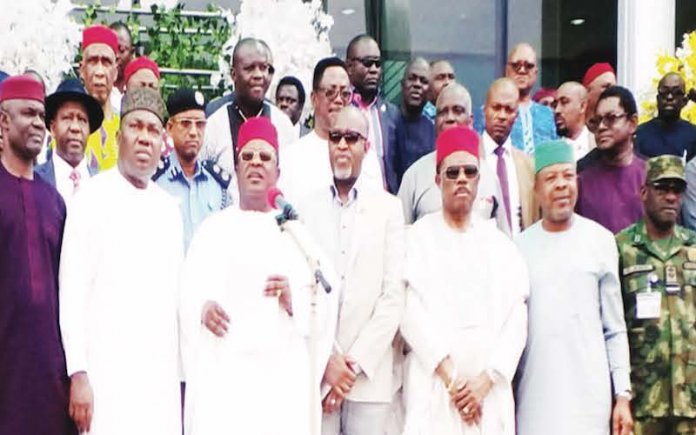 •Approve joint air operation to rid forests of bandits
•Deny involvement in Python Dance
•Why we shut down Enugu Airport, by Minister

Worried by worsening insecurity in their domain, governors of the South-east yesterday held an expanded closed-door meeting with security chiefs and leaders of thought in Enugu to discuss the response to the security situation. They reaffirmed their resolve to ban the movement of herdsmen bearing rifles and cutlasses and their cattle across the five states in the region.

The governors also resolved to commence a joint air operation to flush out bandits from forests in the zone, “and to make it a continuous one.”

But the governors dismissed as false claims by the leader of Indigenous People of Biafra (IPOB), Nnamdi Kanu, that they were the brains behind the military operation in the region code-named “Operation Python Dance”.
Meanwhile, Minister of Aviation, Sen. Hadi Sirika, who was also at the meeting, used the opportunity to explain the recent closure of the Enugu airport, saying it is for safety reasons.
Lately, the South-east, especially, Enugu State, has come under constant attacks by gunmen, resulting in killings of innocent residents and several cases of kidnapping.

Also at the meeting were Commissioners of Police and State Directors of the Department of State Services (DSS) in the five South-east states; President-General of Ohanaeze Ndigbo, Chief Nnia Nwodo; Professor Barth Nnaji; leaders of vigilante/neighbourhood watch groups in the zone; representative of the Federal Roads Maintenance Agency (FERMA), Nzuko Umunna; and Director of Highways, South East, Henry Udeh, among others.

In a communiqué read by Umahi after the meeting, the forum said it had banned herdsmen who moved about with AK-47 rifles and cutlasses from the South-east. It charged the security agencies to enforce the ban.
While commending the Enugu State government for the establishment of Forest Guards and recruitment of about 1, 700 young men, the forum encouraged other governors to launch similar outfits to help tackle the menace of bandits in the region.

The forum said it would request a meeting with President Muhammadu Buhari and all the security chiefs to discuss how to douse tension in the region.
It acknowledged some of the safety reasons given by the Minister of Aviation for the closure of Akanu Ibiam International Airport, Enugu.

Umahi said, “The Sam Mbakwe airport in Owerri will be given a face-lift to accommodate flights that would be diverted from Enugu airport to Owerri airport.”
On “Operation Python Dance,” the South-east governors said in the communiqué they “never invited the Army nor were South-east governors informed of their ‘Operations Python Dance’ until the operations were already started in the states.”

Sirika, who gave reasons for the closure of the Enugu airport, insisted that it was in the overall interest of the people of the region. He said the airport would be open for operation before the end of the year.
The minister said, “Enugu is to the South-east what Kaduna is to the North, and Ibadan is to the West”, explaining that the Enugu airport is among the five major international airports in the country.
“It is based on the need to ensure the safety of the people that we decided to shut down the airport and we promise to tackle it with every sense of seriousness,” he said.