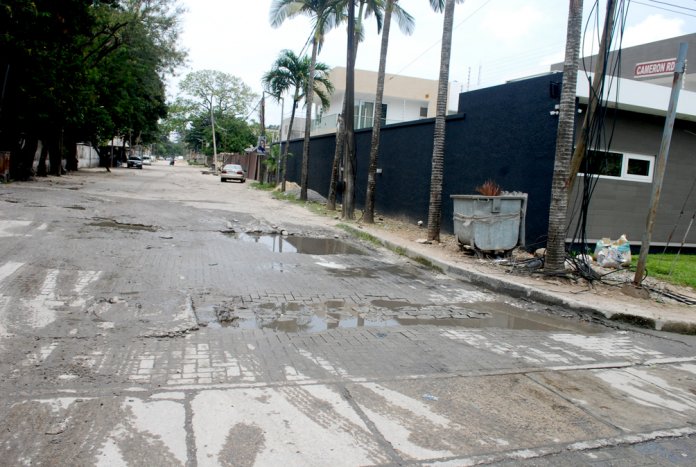 The poor state of basic infrastructure in Ikoyi does not justify the outrageous cost of living or its reputation as the most expensive real estate on the continent. Successive Lagos State governments have shown little interest in transforming this famous suburb of the rich into a beautiful paradise truly befitting its prestige and status writes Demola Ojo

Gazing out of the full length window of the Da Vinci Bar at The George Hotel, I see a sparkling clean swimming pool within a well-manicured garden complete with coconut palms.
This boutique hotel prides itself as one of the go-to choices for visitors to Ikoyi and the attention to detail ensures it’s a sophisticated space. Hanging on the wall – appropriately – is a large replica of Leornardo Da Vinci’s Mona Lisa.

A group of Nigerians dressed in well-tailored suits are having an informal business meeting on the table next to mine. On the other side, three Caucasian ladies chat animatedly. Their slightly raised voices reveal that they’ve recently been to Hong Kong and Dubai. They order coffee and green tea.
I settle for a glass of fruit punch after flipping through the menu. It’s N3,500 (approximately $10). I’m not surprised. This is normal fare in these parts.

For example, a room here – going by booking portals Expedia.com and Booking.com – costs N111,000 (about $300) a night, as much as twice the amount for a comparable room in say, Dubai, Cape Town or Cairo.
Ikoyi lies on the edge of the Lagos Lagoon and is the most affluent neighbourhood in Lagos. Popular with the extreme upper class residents of Nigerian society, it is arguably the wealthiest community within the country.

From where I’m seated, I could easily be in a classy hotel in Johannesburg, Frankfurt or The Seychelles (considering the palms). But the moment you step out of the gate, reality hits harder than a vicious slap on the face.
Getting here was a tortuous journey. The Uber that brought me initially went to the next street, Cameron, in error. Unfortunately, his car paid for it; he failed to evade a pothole in the middle of the road. The jarring impact jolted me out of my reverie. “Sorry,” I offered, even though it was no fault of mine.

I shook my head wondering how this could be in what is supposed to be highbrow Ikoyi. But that was just a tip of the iceberg – or crater – as we were soon to find out.
The George is on Lugard Avenue, named after Frederick Lugard, Nigeria’s first Governor-General. To get to Lugard from Cameron, we passed through Thompson Avenue. This is a harrowing experience, rain or shine. Thompson is an eyesore, and potentially hazardous.

Turning into Lugard, we were met with a pool of water in the middle of the road. It was due to a depression, depth unknown. The already traumatised driver inched forward, gently.
For both our sakes, I hoped we would pass without incidence. We did. The next few metres driving into the George were uneventful. This, because The George is on the better side of Lugard.
The other part of Lugard would have been better off as a dirt path. Unfortunately, it has multiple potholes that make it almost impassable. Only residents who have to, pass through.

I sigh as I sip my $10 juice. I have more places to get to within Ikoyi before evening. Better to set out before the notorious traffic caused by those closing from work – and amplified by terrible roads – set in.

I decide to head to Danfo Bistro, a restaurant and lounge themed around the ubiquitous yellow buses Lagos is known for. It’s on Alexander Road. Alexander is one of the roads that do highbrow Ikoyi justice. It is part of a stretch that includes Bourdillon and Gerard. These roads are smooth, well-paved and brightly-lit at night.

This stretch is considered to be the most prestigious not only in Lagos, but in Nigeria. It covers various embassies, offices of international organisations, the multi-billion naira Lekki-Ikoyi Link Bridge, opulent mansions serving as status symbols for the mega rich that live here, and fancy hospitality outlets.

Alexander is an example of what the inner roads that lead to the houses and offices of these high net worth individuals should be like.
Unfortunately, most of the streets off this Bourdillon-Alexander-Gerard axis are riddled with potholes. The few exceptions being Glover Road and those within estates like Parkview and Banana Island.

Beyond the Superficial
I call an Uber. He knows the area he says, so he ignores the map. We turn right, then left which takes us back to another part of Thompson. The road? Atrocious! These aren’t potholes. They are like depressions caused by an explosive. Or maybe hit by an asteroid.

Man and machine bear the brunt as we meander through the dusty, undulating path not fit to be called a road. Is this really what the upper echelon of Lagos society put up with on a daily basis?
This dreadful road passes in front of the Lagos office of British Council, the UK’s international organisation for cultural relations and educational opportunities.

There are interlocking bricks stacked by the roadside, an indication probably, that it’s about to be fixed. The Uber driver puts up a brave face, since he decided on this route. The road is pretty bad he admits but with a caveat; there are so many other parts of Lagos that have even worse roads. I remind him that this is meant to be the most affluent area in the country.

Preposterous Prices
Many of Nigeria’s billionaires maintain property in Ikoyi. It has some of the most opulent houses in Nigeria and is thought to have the most expensive real estate on the entire African continent.
A random search on Nigeria Property Centre – a web portal that connects buyers and sellers of property to each other – reveals the mind-boggling amounts quoted to rent, or buy a house in Ikoyi.

With each search, the prices go up. Many of the prices are quoted in dollars. These are for flats. Three-bedroom apartments in some of the luxury apartment buildings in Ikoyi go for between $45,000 and $80,000 annually.
To buy a flat in Ikoyi can set you back anything from a million dollars to five million. New luxury flats in apartment buildings can cost even more.

Beyond these are the mansions that the ultra-rich construct to their taste. The world’s richest black man (Aliko Dangote), its richest black woman (Folorunso Alakija), Mike Adenuga and Bola Tinubu are some of a few billionaires that own stunning edifices with value that can only be estimated. Figures around the $50 million mark have been bandied in some cases.

Costly Contradictions
On Alexander, just before an entrance to Parkview, Danfo Bistro is filling up. Its allure is in its setting; constructed out of a container with cutup chassis of a bus as part of the decor.
Looking across Alexander Road from the open air rooftop, you can see two storey buildings. One is derelict, a sore thumb that reminds that it is not all posh here.

Among other things, Danfo Bistro serves classic Nigerian dishes like Akara (fried bean cake), Suya (spicy mean skewers) and Ewa Agoyin (plain cooked beans served with tomato and pepper stew) to “bougie” clientele at over-the-top prices.
At Danfo Bistro, a combo of Ewa Agoyin and bread goes for N2500, ten times the amount those who love the delicacy buy it from street hawkers. The cocktails here are just as expensive as the ones at the internationally branded hotels in Lagos.

The prices here are not based on how much the component units cost of the bistro cost. Rather, you’re paying for the thoughtfully designed architecture; it’s unique and could pass for a tourist attraction.
You’re also paying for the fact it’s in upscale Ikoyi and you get to rub shoulders with the cool crowd, Nigerian and expatriate.

And just like upscale hotels like Southern Sun and The Wheatbaker to niche restaurants, bars and nightclubs that dot this locality, you’re paying for the overheads incurred from generating their own electricity.
The area that has been described as the Beverly Hills of Africa and the Belgravia of Lagos suffers as much from major infrastructural deficits like bad roads and poor electricity supply as places that cost a tenth to live in.

A Different Past
It wasn’t always like this. The area that makes up Ikoyi was originally a continuous land mass with Lagos Island, until it was separated by a narrow waterway that was dug by the British colonial government. This canal has now been built over or filled so that the island is fused with Lagos Island once again as part of a bigger island. But the class separation remains.

During the colonial era, the then island of Ikoyi was developed as a residential cantonment for the expatriate British community and still retains many of the large colonial residences built between 1900 and 1950.
Upmarket residential properties continued to be built after the colonial period, and the Island and its Dodan Barracks became the residence of some of Nigeria’s military rulers.

Ikoyi is now home to several large luxury apartments, estates, and upscale office developments as well as numerous social clubs including the Ikoyi Club 1938, Ikoyi Golf Club, Ikoyi Polo Club, the Lagos Motorboat Club, the Lagos Jet Ski Riders Club, and other trapping of the elite. It also contains many government buildings, schools, hotels and multinational businesses. Google Nigeria, British American Tobacco and the World Health Organisation are just a few of the many global brands with their Nigerian offices here.

This development is a radical departure from Ikoyi’s original design, which was originally composed of modest single-family residences with large gardens.
With the lack of constant electricity, pipe-borne water, and general decay in basic infrastructure that is typical of Lagos, concerns have been raised as to whether Ikoyi has the necessary infrastructure to continue to sustain this type of development.

Unfortunately, past governments of the state have refused to accord Ikoyi the attention it deserves, considering the fact that its inhabitants are the state’s highest taxpayers. It is a shame that the part of Lagos where many visitors judge the city by, is in such a condition of disrepair.

As it stands, the lack of attention paid to maintaining basic amenities, talk less of rigorous planning for the future by successive state governments, means residents of Ikoyi will keep paying through their noses to live in a fool’s paradise. 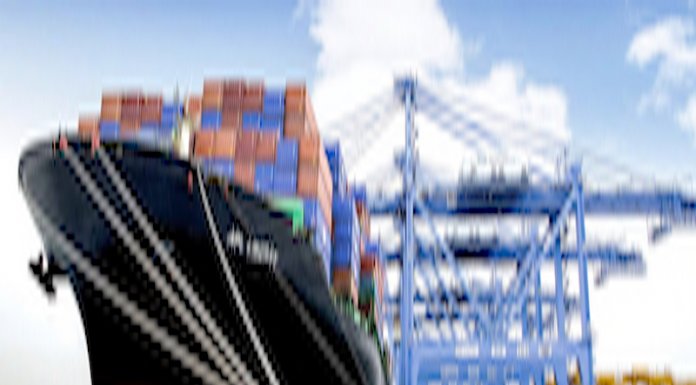