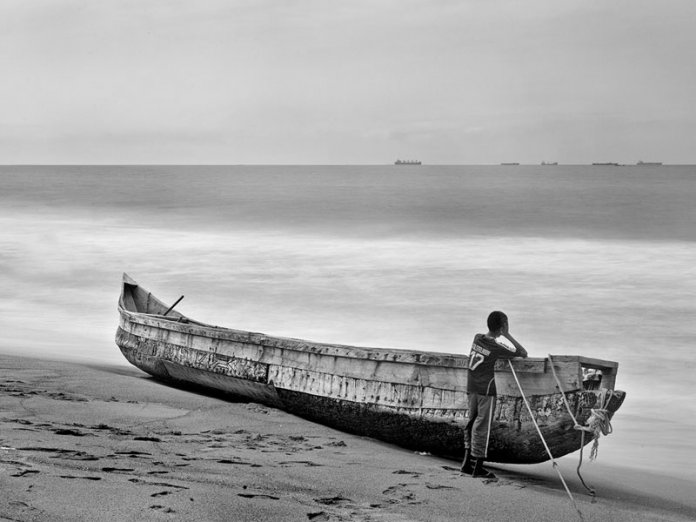 With his forthcoming solo exhibition in Lagos, Timpre Amah hopes to assert his presence in the talent-glutted Lagos art scene, Okechukwu Uwaezuoke writes

EXHIBITION
“Aquatic Migration”, he titles the painting, which was produced in 2015. This painting was pleasantly rendered with a printmaking technique called additive plastography, which was invented and popularised by the iconic artist Bruce Onobrakpeya. It offers a glimpse of an underwater activity, depicting a school of fishes with their medley of eye-pleasing colours swirling around the water’s blue backdrop. Could this be a veiled allusion to the environmental degradation in the Niger Delta caused by the activities of the oil companies?

Perhaps, not. Indeed, the artist, Timipre Willis Amah, says his inspirations are not solely based on his physical environment – which is Yenagoa, “in the heart of the Niger Delta” – but also on what he calls the “general issues of life”.

“As an artist from the region, I owe not just my self, but also the next generation, the opportunity of a better environment,” he explains. “To this end, we cannot stop complaining of the changes in our environment caused by oil spillage.”

The Niger Delta University lecturer describes his paintings as “hard edge” and a representation of his “inner feelings of life”. As for his love for the use of colours and symbols in visual communication, he owes them to his background as a graphic artist. “Acrylic is most friendly for hard-edge painting as it’s fast-drying, additive plastograph and viscosity are mainly for my printmaking,” he further explains.

Back to the painting, it is one of the several he hopes to feature alongside some black-and-white photographs at his forthcoming solo exhibition in Lagos, titled Facets and Phases of Things Seen and Unseen. The exhibition, which holds at the Thought Pyramid Art Centre along Norman Williams Street in the South-west Ikoyi neighbourhood, introduces him as a painter to the Lagos aficionados, who have previously been acquainted with his photographs. It is scheduled to open on Saturday, September 21, which is two days before his 50th birthday, and end on Saturday, September 28.

Coming to Lagos, for the artist, is nonetheless a significant move. First, there is the city’s attraction as Nigeria’s artistic hub. More importantly, Amah hopes to move on from the big-fish-in-a-small-pond status he enjoys in his home base. Previously, to make his art available to a wider audience outside Bayelsa, he had relied more on the different art platforms he had discovered on the internet and on his website. Now, with Facets and Phases… the Lagos audience would have an opportunity to closely interact with his works.

Breaking down the exhibition’s title, Amah says “Facets” alludes to “the smoothness of water and clouds” in his photographs as well as to “the seamless blend of colours and the geometric shapes” in his paintings. As for “Phases”, he refers to it as the “transmission of then and now, the past and present, the progression of life”. The latter is more evident in the series he titles the Circle of Life, Optimism and the work he calls “Enshrined Wood”. “The photographs have also shown Phases in our development as a nation, looking at the Bond series and the collection in architecture, Pride and CMS as against Spirit and Breaking Boundaries.”
There is no doubt about the artist’s predilection for black and white photography, as his proposed offerings at the forthcoming exhibition can attest to. “I am a fine art photographer and my best genre is black and white,” he confirms.

His reason? “It helps to take away the distractions that come with colour photography. We easily relate with the known before moving on to the unknown.” Thus, familiar landmarks are shown in his photographs as though they were unknown. From the viewer’s perspective, they look new thanks to the photographer’s angle of view. Then, with a little tweaking of light on the subject, it assumes a surrealistic – or, perhaps, otherworldly – halo.

Take the snapshots of the Niger Bridge in Bond series 2 and 3, for instance. The viewer is compelled to contemplate the familiar landmark from the artist’s different angles of view. Ditto the shots of the Lagos Third Mainland Bridge in Bond 4 and 5. Gleaming through these and the other photographs featuring in the forthcoming exhibition is Amah’s passion for this medium.
It is not surprising, therefore, that he had clinched the first prizes for both the OYASAF 2010 National Photography Competition and the first BOSKEL 2014 National Photo Contest. Also, as early as September 2009, he featured at Camera Austria, which held at the Stadtpark in the city of Graz.

Like all artists in the Ivory Tower, Amah manages to skirt around the potential conflicts between his academic duties and studio practice. Even with a PhD in view from the University of Port Harcourt, he is still intent on asserting his relevance as a studio artist. This is because he recognises that, as a lecturer in fine arts, his first call remains the creation of art. Then, follows its theorisation. “When I am not in class teaching or researching, I create art. Besides, the creative process of art is the same as research. I have also supported the American academic artist promotion style, where a studio artist is accessed more with the art he creates while the art historian is accessed with his writings. But, because the studio artist as a lecturer is in the academic environment, he must theorise and analyse his works properly.”

Still on his studio practice, he says that he is guided by the urge to master his craft and remain consistent in whatever he is doing. This is with the understanding that nothing is new and creativity is inexhaustible. In addition, he believes that there is always a room for everybody in all professions.

After graduating from the Federal University of Uyo in 1998 with a BA (Ed) degree in graphic design, he had moved on to the University of Nigeria, Nsukka, where he graduated with an MFA in 2006. It was shortly after this that his photography career flagged off.

A year before his first solo photography exhibition, which was sponsored by the Bayelsa State government in 2010, he took up a position as a university lecturer in 2011. Of course, other exhibitions, both local and international, followed closely on the heels of the first.

Looking back more than two decades after, since his graduation in 1998, the father of three now sees competitions as platforms for testing the strength of his endeavours and considers photographing public spaces in Nigeria as his greatest challenge. This is because the latter exposes him to the constant harassments of security officials.