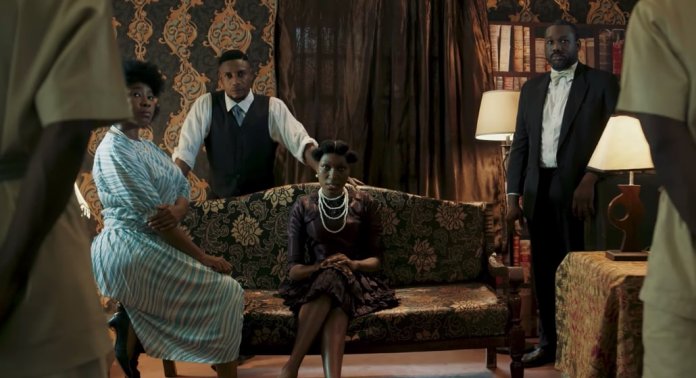 Imoh Umoren’s biopic movie titled The Herbert Macaulay Affair is set in the 1920s, around the time of the Bubonic plague in Lagos. The historical piece, as depicted in its trailer, is filled with action, riveting twists, and intrigues. Ferdinand Ekechukwu reports

Biopic movies about iconic figures are not a common feature in Nollywood even as we have as much acclaimed images littered in our historical archives to represent to generations. The reasons for this may be quite understandable. It could take so many uncommon factors to be considered and put in place to get such project actualised. Factors like adequate research, timing, funding, desired duration and a strong cast to pull the production could be thought of first.

But the absence of the elements mentioned poses a challenge to such production. For instance, it took a whole lot of these to put together the biopic on Mandela: Long Walk to Freedom, a 2013 British-South African film starring Idris Elba and Naomie Harris. For filmmaker, Imoh Umoren, his recent attempt at a homemade biopic on foremost Nigerian nationalist Herbert Macaulay is worth commending. The prolific filmmaker just released a trailer for the movie about the iconic figure.

Titled The Herbert Macaulay Afffair, Umoren revealed that he was inspired to make the film in 2014 based on his findings as a member of the writing team for “Nigeria at 100” documentary. “As we delved in, I realised there were so many parts of our history that we did not touch. For me, I choose to make the story about him to remind Nigerians that we as a people had never stood for tyranny. We spoke in one voice and overcame oppression together.”

The costumes, props, language and location will allow the story to reach maximum authenticity and a must watch out for the cinema audience. However, whatever the movie now falls short of, going by likely criticism as often expected on any work of arts, wouldn’t be out of place. Umoren explained that funding was a major struggle while he tries to make the film as “some people did not believe that a Nigerian director could pull this off.”

The setting of the epic movie is in the 1920s, around the time of the Bubonic plague in Lagos. This new twist about a part of his life as a revered Nigerian patriot, is definitely welcoming and in a good way, helpful to young Nigerians understanding of history. The historical piece, as depicted in the trailer, is filled with action, riveting plot twists, and intrigues.

The Herbert Macaulay Affair is set to hit cinemas across Nigeria from the 1st of October 2019, and stars William Benson, Tonia Chukwurah, Kelechi Udegbe, Saheed Balogun, Stanlee Ohikhuare and other unpopular but talented faces. The periodic drama explores the return of the Nigerian nationalist, after spending time schooling in England. Herbert, upon his return, is annoyed by the segregation he witnesses at work and in his way becomes a “problem” to the British authority. He meets and falls in love with Caroline Pratt whose father is a police officer of Her Royal Majesty. This immediately sets him on a warpath with his intending father in law as both men are of opposing ideologies.

Despite opposition and setbacks, Caroline and Herbert fall deeply in love which this story captured. Umoren had explained that the film dives into Macaulay’s personal life, struggles and love for Caroline Pratt. According to several historical sources, Macaulay married Caroline Pratt, daughter of an African Superintendent of Police in December, 1898.

The marriage came to an end in August, 1899 upon Caroline’s death during childbirth and Macaulay was reported to have vowed never to marry again. Umoren said; ”The Herbert Macaulay Affair is the story of young Herbert who returned from studying overseas to sow the seeds for the revolution that would eventually lead to our Independence. The story takes place between 1898 and 1925. It dives into his personal life, his love for Caroline Pratt and his family and his love for the people. We see different sides of Herbert; The Lover and The Revolutionist.”

Known for his socially conscious work, especially the first black and white silent film in Nollywood ‘Hard Times’ which won an Africa Magic Viewers’ Choice Awards (AMVCA) in 2015, Umoren wrote, directed, and produced the 2017 film, Children of Mud. He also helms the upcoming MNet pic, Lagos: Sex, Lies, and Traffic. According to him, The Herbert Macaulay Affair is a story about the beginnings of a revolution. And hopefully, the life Herbert Macaulay inspires us to stand up against tyranny. And in this time and age, and in a country where knowledge of the past is at a premium, The Herbert Macaulay Affair may well be one of the things we need.