Amby Uneze who wrote under the referenced Caption on Wednesday August 7, 2019 always writes from two dimensions. One, as the State Correspondent of the THISDAY Newspaper in Owerri. And two, as a chieftain of the Peoples Democratic Party (PDP) in the State. When he writes as a Correspondent, you would ultimately know and you would equally know when he writes as a PDP man. In his analysis with the caption in question, he wrote undoubtedly as a bonafide PDP folk of Aboh Mbaise extraction where Governor Emeka Ihedioha comes from. That was the reason he decided to advertise falsehood at the expense of innocuous facts.

Uneze had written to justify the hostility, witch-hunting, blackmail and attacks launched by Governor Ihedioha and the PDP chieftains in the state against the former governor, and now the Senator representing Imo West Senatorial District, Owelle Rochas Okorocha, and his family. In his work, Uneze tried as much as he could to paint Okorocha black and discredit his achievements for the eight years he was governor. So, he didn’t write as an unbiased State Correspondent of the THISDAY Newspaper innocently doing his job, but wrote as one of the members of the PDP in the state who has the feeling that the only way to play down the achievements of Okorocha in the state for the period he was governor was to blackmail him and discredit his projects.

Afterall, before now, these PDP elements were telling the World that Okorocha never achieved anything in Imo as governor. But today, Ihedioha has not done any other thing except talking about Okorocha’s projects and doing all within his reach to discredit them. And he has to a large extent, helped to authenticate our repeated claims that Okorocha, in his governorship for eight years, had more than 1000 verifiable projects to his credit. And with that record, had achieved more than all those before him had achieved put together.

The truth is that Ihedioha is intimidated by Okorocha’s achievements. He is cowed. If you like, you can say he is mesmerized by Okorocha’s monumental legacies. And he is leaving no stone unturned to see how he could lower the volume or the antenna of these amazing achievements. Incidentally, he has not been able to do that. Hence, he has resorted to a well programmed campaign of calumny against his predecessor and his achievements.

He has been busy portraying some of the prime projects of the former governor in bad light like the six new universities, four polytechnics, three colleges of education, the two fyovers, the two tunnels, the ultra-modern Justice Oputa High Court Complex, the International Cargo Airport, Police Headquarters, Prison Headquarters, the brand new Government House, the 27 hospitals, Imo Trade and Investment Centre, Presidential Guest House and a long list of others. Meanwhile, he has not told his audience that the Presidential lodge and Odenigbo Guest House where he and his key appointees have been staying since May 29, 2019 when he was inaugurated were all built by Okorocha.

Uneze failed to tell the public that before Okorocha, the PDP had governed the state for 12 years. And for those 12 years, nothing was on ground to show for that outing. They were only telling Imo people that there was no money until Okorocha came and began to do projects that made Imo people to know that, for the 12 years of PDP, Imo people were defrauded or short-changed.

Uneze could not also state that the PDP government in the state at the moment is a government of petty lies and fake promises. Indeed, a visionless, passionless, and missionless government. Ihedioha has set up 11 committees and all against Okorocha and his administration including the ones headed by Dr. Abraham Nwankwo, Prof. Jude Njoku, and so on. They have written not less than 16 petitions to EFCC and nine to ICPC, all in their desperation to malign Okorocha and discredit his achievements.

They said Okorocha and the wife made away with 67 vehicles and N50 billion and we challenged them to publish the particulars of the 67 Vehicles and the details of the N50 billion, and uptill now, they have not responded to that. They also claimed that Okorocha incurred N20 billion debt through garnishee orders by courts. We equally challenged them to publish the particulars of the cases that warranted the garnishee orders so that the public would know whether it was PDP past governments that attracted the garnishee orders or that of Okorocha. Again, they have not done that.

They have also talked about Okorocha and family taking lands or properties belonging to the state; and as we write, they have not been able to mention the lands because they know that Okorocha was and still the highest property owner in Imo, long before his governorship. They have talked about the N200 billion debt Okorocha left behind. And we said, it is not true and also asked them to prove their claim. They recoiled. Uneze had specifically talked about the land at Orji where the Rochas Foundation College with over 3,000 Imo children are schooling free. A government that means well for the citizenry would have asked some valid questions including asking whether these orphans and other children in the college are the former governor’s children before resorting to blackmail?

Few weeks into his administration, Ihedioha hosted selected columnists and media captains vis-à-vis some bloggers at the Government House Owerri. They spent two days in the state and other things followed. And the outcome of that meeting was the reason some of the columnists have chosen to be hard on Okorocha and on all the good works he did in Imo. After delivering on the hatchet job, two of such columnists are holding political appointments now in Imo. And while in Imo, he didn’t allow them to go round so that they wouldn’t see the projects Okorocha did. They were kept in a hotel opposite the Government House. One of the absurdities in this pen vocation.

Ihedioha cannot achieve one – tenth of Okorocha’s achievements even if he stays eight years as governor because he does not have the kind of ideas, vision, passion and commitment Okorocha had. And he cannot also erase all that Okorocha achieved in Imo because they are there for people to see. Before Okorocha, every road in Owerri and environs was one lane. But Okorocha came and made the major roads in Owerri, the state capital, 12 to 16 lanes. And opened up Owerri which had stopped at Concorde Hotel. Owerri was like a glorified village and “squeezed”. But Okorocha opened up the state capital by constructing roads where people never imagined there could be roads. And development snowballed. And all these have informed our claim that Rochas Anayo Okorocha is the defending champion of Imo governorship putting his achievements into consideration. Until someone comes to do better than him, he would still hold the medal. And there is nothing anybody can do about that.

What is happening in Imo at the moment with Ihedioha leading the pack is vendetta over the defeat the PDP and its candidates suffered in the hands of Okorocha in 2011 and 2015 respectively. They are fighting Okorocha and also APC unknown to some folks, obviously for political reasons. They intend to ensure that APC does not have footing again in the South-east.

In their desperation to eclipse all that Okorocha left behind as legacies, Governor Ihedioha has allowed traders to come back to the relocated Ekeukwu Market and has allowed the magnificent Somto Mother & Child Hospital built at the site, to be vandalized, not minding that the money spent in building the Hospital was Imo money. He also decided to be unmindful of the wisdom and political-will Okorocha had displayed in removing that market from there and taking it to a more serene and befitting location. And we have continued to tell Governor Ihedioha that Okorocha had been governor for eight years and cannot be governor again, why acting as if he is in contest with you. What is happening in Imo under Ihedioha is disgusting and those encouraging him in his hostility are enemies of Imo State and her people.

With the achievements of Okorocha in Imo for eight years, Ihedioha’s government may be forced to refund him some money at the end of all the probes he has initiated. They have also discovered that they had petitioned to EFCC and ICPC in a hurry because they wrote without taking stock of all that Okorocha did in Imo as governor. So, Nigerians of goodwill should disregard the blackmail of Ihedioha and his PDP in Imo against Okorocha. And those who write for them too. Okorocha had invited columnists and editors to see his projects but Ihedioha invited his own to take up arms against Okorocha. Ihedioha and PDP are fighting a political war to regain relevance, after all, it is not only in Imo where a PDP man took over from an APC man. It happened in Oyo, Zamfara, and Bauchi states? But why the whole noise in Imo? Like we have intoned, Ihedioha has come to unveil Okorocha for celebration for all he did for Imo people because with the PDP style, he cannot put up one structure before the bubble bursts.

*Onwuemeodo is the Special Adviser (Media) to the former governor of Imo State, Senator Rochas Okorocha 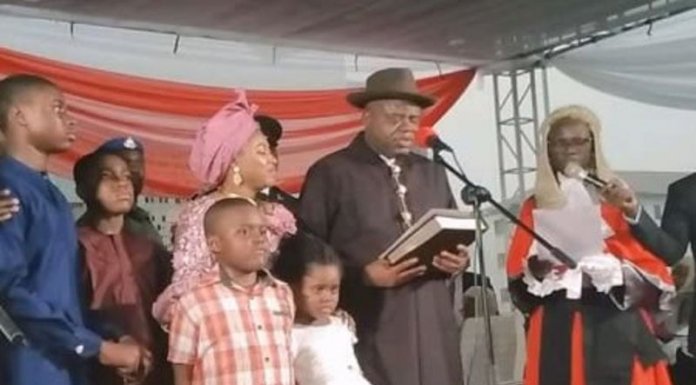