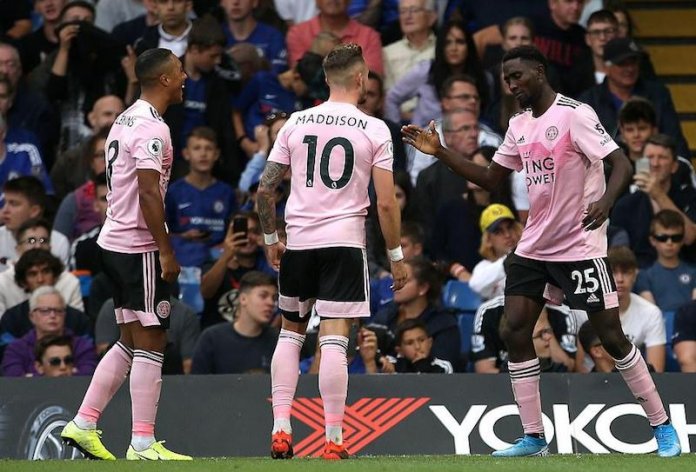 After he redeemed himself with a perfect header that cancelled out his horror gift to Chelsea to earn Leicester City a point at Stamford Bridge yesterday, Nigerian midfielder, Wilfred Ndidi, described his outing as a ‘mixed feeling.’

Ndidi who was involved in both goals at both ends of the field, lost the ball outside Leicester City goal area to gift Mason Mount the chance to put Chelsea ahead after just seven minutes for his first goal in the English topflight.

But the never give up Nigerian spirit fired the Super Eagles midfielder to redeem himself.

Lampard’s side started with real intent, Spain forward Pedro volleying into the side-netting and France midfielder N’Golo Kante denied a goal against his former club by Christian Fuchs’ fine challenge either side of Mount’s goal.

Leicester were much better after half-time and secured the point their second-half dominance warranted when Ndidi got between Spain right-back Cesar Azpilicueta and France defender Kurt Zouma to head in from a corner.

Both teams remain without a win, with Leicester on two points from two games, one more than Chelsea.

Despite opening the season with their biggest Old Trafford defeat against Manchester United since 1965, there was a carnival atmosphere inside Stamford Bridge to welcome a Chelsea legend returning to manage the club he spent 13 years playing for.

Lampard’s image adorned the front cover of the programme, while the 41-year-old was greeted by the sight of a huge blue-and-white ‘Welcome Home Super Frank’ banner when he emerged from the tunnel before kick-off.

There were placards and scarves too and it was not long before the veteran of 648 Chelsea appearances was punching the air in celebration after Mount punished Ndidi’s hesitancy after receiving the ball from Jonny Evans.

Despite the heavy 4-0 defeat, Chelsea had started the game well at Old Trafford last week, hitting the woodwork twice before falling away badly.

They again faded in this game, especially given the aggressive start they had made in the upbeat atmosphere created by Lampard’s presence.

While Leicester failed to muster a shot on target in the opening 45 minutes, Chelsea managed three in the opening seven minutes including Mount’s goal, a superb low finish that left Schmeichel flat-footed.

Fuchs’ challenge to deny Kante was pivotal, while Mount headed another opportunity tamely at Schmeichel before Leicester responded strongly to take the shine off Lampard’s return.