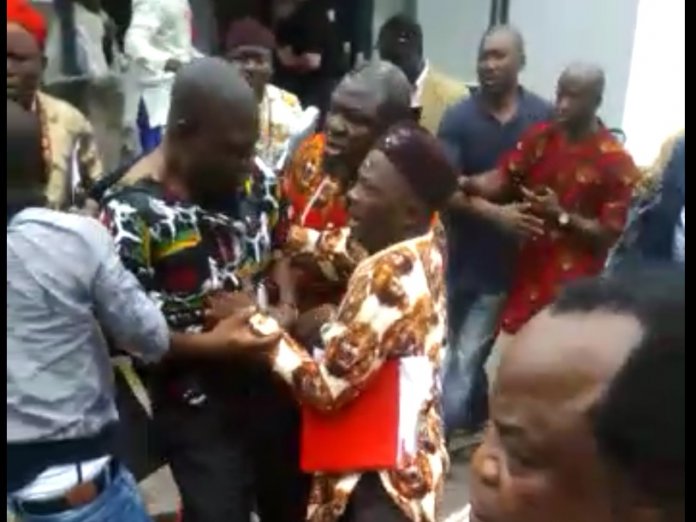 The immediate past Deputy Senate President, Senator Ike Ekweremadu was yesterday attacked in Nuremberg, Germany by some members of the proscribed Indigenous Peoples of Biafra (IPOB).

Ekweremadu, the Chairman of the Senate committee on Environment gave the account of the event on his social media handle @iamekweremdu, assuring Ndigbo and his supporters across the nation that he was safe.

He said: “I attended the Second Annual Cultural Festival and Convention organised by Ndi-Igbo Germany in Nurnberg where I was billed to give a keynote address alongside the President-General of Ohanaeze Ndigbo, Chief Nnia Nwodo, who could not make it eventually.

“I was given a resounding welcome by Ndigbo in Germany and everything went smoothly until some men, who identified themselves as IPOB members stormed the venue and began to complain about the killings in the South-east, stressing that there would be no Igbo event at the venue.

“I tried to engage them, but when they became unruly, I had to leave the venue. The organisers also invited the police and I was accompanied out of the venue.

“I am disappointed in their conduct. I am one of the persons, who have spoken up on justice for Ndigbo, the Python Dance, judicial killings in Igbo land and elsewhere both on the floor of the Senate and in my written and personal engagements with the Presidency and the media.

“I also rallied the South-east Senate Caucus to secure Mazi Nnamdi Kanu’s release with Senator Enyinnaya Abaribe taking him on bail to douse tension in the South East, I nevertheless do not hold this to heart against them, for they know not what they do.

“I have received thousands of solidarity calls and messages from well meaning Ndigbo. I want to assure them that I am hail and hearty. I have also spoken with the Nigerian Ambassador to Germany, Ambassador Yusuf Tuggar”.

Reacting to the assault yesterday, Ohaneze, the Igbo apex socio-cultural organisation, Ohanaeze condemned the attack on Ekweremadu by members of the proscribed Indigenous People of Biafra in Germany.

Ohanaeze called on the German law enforcement agencies to bring the perpetrators to justice. It described the assault on Ekweremadu as a disgrace.

In a statement he issued yesterday, Nwodo said the assault on Ekweremadu by Igbos in Germany “is disappointing, grotesque and dangerous for Igbo solidarity.

“This violent, rude, impertinent, divisive and discourteous style of IPOB or IPOB-instigated miscreants is damaging to our cause. It strengthens the case of those who describe them as terrorists and weaken our case against the infringement of our fundamental human rights.”

“Ekweremadu negotiated the sureties and securities for Nnamdi Kanu’s release on bail. He does not deserve this picketing and disgrace. A disgrace to him is a disgrace to Igbo race.

Ndume, Senate Committee Chairman on Army, spoke on phone with THISDAY from Saudi Arabia said, the attack was uncalled for and unwarranted.

According to him, Ekweremadu is one person who has always identified with the Igbo nation at every possible opportunity at Senate plenary since he was elected concecutively to the Senate since 2003.

His words : “the IPOB members in Nuremberg, Germany went after their hero, Nigerian hero and they indeed attacked the wrong person.

“If they take recourse to immediate past, Ekweremadu is not the person they ought to attack, and indeed they have to stop such attack on anybody for that matter.”

The Chairman of the Nigerians in Diaspora Commission, Abike Dabiri-Erewa equally condemned the attack on the former deputy senate president.

Dabiri-Erewa in a statement on Saturday described the incident as an embarrassment to the country.

She stated that some of the culprits who perpetrated the act had been apprehended and called on the German government and law enforcement agencies to ensure they faced the consequences of their actions.

She said: “It is also shamefully pathetic that an event which was nobly put together by the Ndi-Igbo community in Germany whose members make up the majority of Nigerians living in Germany, to amongst other things provide a forum for the Diasporans and various stakeholders to network and to facilitate a better cooperation between German and Nigerian businesses, ended up in such a disgraceful manner.”

She appealed to Nigerians to be of good behaviour wherever they find themselves “because such incidents tarnish the image of the country.”