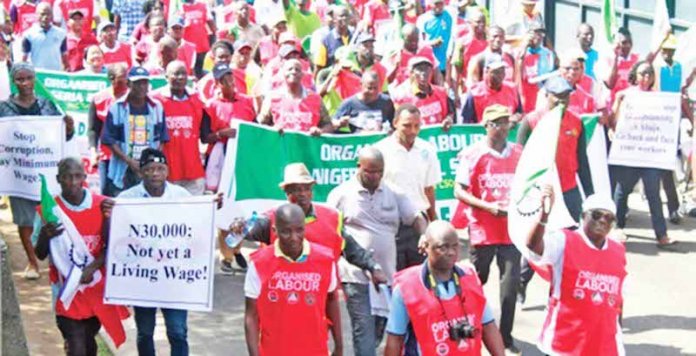 Abia State Government has faulted salary arrears claims made by the state chairman of the Nigeria Labour Congress (NLC) Mr. uchenna Obigwe, clarifying that no worker in the state service is being owed salaries.

While describing some comments by obigwe as distortions and falsehood, it emphasised that “Abia State Government is not owing workers in the Ministries, Departments and Agencies (MDAs) of the state any salary.”

The state Commissioner for Information, Chief John Okiyi Kalu, said that obigwe is either ignorant of laws by the State House of Assembly that forbids state from paying salaries of workers in state parastatals as the management of those parastatals are permitted by law to make, retain and use their revenue to pay their workers as and when due, or that he (obigwe) is playing politics with workers’ salaries.

According to Okiyi: “Our attention has been drawn to a press statement and a flurry of radio interviews granted by the Nigeria Labour Congress (NLC) Chairman in Abia State,  Uchenna Obigwe, supposedly on behalf of organised labour, with regard to the state of workers’ emoluments.

“We agree that “a labourer deserves his wages,” and, hence, have worked very hard to prioritise workers’ emoluments in the state. As confirmed by Comrade Obigwe, via a radio program monitored in Umuahia,.

“Abia State, Government is not owing workers in the Ministries, Departments and Agencies (MDAs) of the state any salary.

“Statutorily, these are the workers paid directly by the state government and they constitute more than 70 per cent of the state workforce.

“NLC leadership at both state and national levels confirmed that workers in our MDAs are not being owed salaries and we make bold to state that they have already received July 2019 salaries.

“According to existing laws made by the state House of Assembly, the state government does not pay workers in state parastatals as the management of those parastatals are permitted by law to make, retain and use their revenue to pay their workers as and when due.

“If organised labour, led by Obigwe, is asking the state government to directly pay salaries of workers in parastatals then they should be bold enough to approach the state House of Assembly to amend the relevant laws to ensure that such parastatals remit their revenues to the state coffers so the state can assume full responsibility for paying workers in those parastatals.

“It is on record that this administration has made several interventions to help pay parastatals workers including paying workers of ABSUTH 11 months salary arrears in 2015, payment of N2bn debt of Abia Poly, payment of months of subventions to all the ailing parastatals in the state etc.” Okiyi said.

Okiyi however acknowledge that: “ we have unpaid salaries with secondary school teachers, it is important to state that it is not true that they have continuously not been paid since October 2018. In December 2018, February 2019, March 2019, May 2019 and in June 2019 when they received two months’ arrears, we verifiably made payments to secondary school teachers.