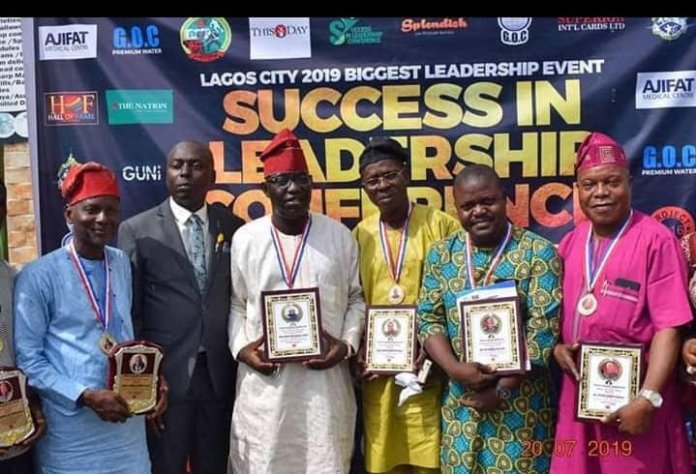 Rebecca Ejifoma
In yet another thrilling style, the Success in Leadership Conference (SILC) in collaboration with Hall of Fame ignited the spirit of public service in Ajeromi Ifelodun local government in Lagos when it awarded about 20 philanthropists and unique leaders in the community.
The annual recognition ceremony, which was meant to pave way for more acts of civil responsibility among the leaders, was its 10th edition.
Reacting to the gesture, Local Government Chairman of Ajeromi Ifelodun, Shuaib Ajidagba, lauded the organisation.
“SILC has done really well. And we appreciate the host. With this, I call on public office holders to focus on delivering on their campaign promises. That will help them leave good legacy for posterity,” he said.
Ajidagba, popularly called Ajifat, added that government at all levels must be responsive to the needs of the people, as Nigeria is in dire need of development.
For the chairman, leadership is about influence, impact and leaving good legacy for others to trail. “Nigerians will be better off if leaders do things that better the lots of the people”.
According to him, Nigerians are wiser now; hence, would no longer be fooled by white elephant projects and unfulfilled promises. “Today, Nigerians can speak with their votes as it now counts”.
Ajifat, proffered solutions including provision of essential services in the education sector, basic infrastructure and enhancing health care services delivering to the grassroots as essential for all.
“As public office holders, we are elected to serve the people and make their lives better than we met it,” he pointed out.
With the ultimate penchant to honour empathic individuals who are trailing the blaze, setting the pace and distinguishing themselves in their chosen careers in the society, the convener, Mr. Ifeanyi Oluebubejesus, expressed fulfillment.
“These awardees today were carefully chosen after much scrutiny from our award committee, from the government ad business world. Over 200 distinguished leaders across Nigeria have been awarded since we kicked off,” he said boldly.
With the theme, ‘Taking The Lead brought together had government representatives, business leaders, and youths in attendance’, Oluebubejesus assured newsmen that the SILC forum has motivated and encouraged young people to improve their leadership potentials.
He spoke further: “We have spurred lots of other to start or advance their business. We have given free scholarships to the less privileged children, and also reached out to more than 300 women in skills acquisition.”
The Managing Director of Deetab Hospital Amukoko, Dr. Oyedul Adeleye is one of the recipients. He has been serving in Ajegunle as a medical doctor since 1993.
“Since 1993, I’ve been serving. That goes to show that before I could be recommended for this, I really impacted positively into the lives of inhabitants of that area and beyond,” he said in excitement.
Having commended the convener for such an emulative recognition, Adeleye holds firm that the country’s health system was improving.
“But we are not there yet. There are a lot of challenges to be faced, eradicated and conquered. We will achieve our aim very soon,” he assured newsmen.
Meanwhile, the medical expert called on leaders to continue in their various fields. “They should not relent so that they can also be qualified for this award.”
Among them is a legal practitioner, Mr. Tajudeen Amusa, who could not contain his joy in reaction to the award. His words: “I didn’t know people were watching what I was doing for the community selflessly.”
According to the barrister, he born and nurtured in Ajegunle over 50 years ago. While there, he lends a hand to residents legally. “I also own a foundation that caters to widows and the needy in Ajegunle”.
Other recipients include: Former Executive Secretary Ifelodun Wahab Adebayode; Mrs. Theresa Ojiakor; Mrs. Gladys Nweye and Mrs. Esther Oluwatoyin, a honourable among others.