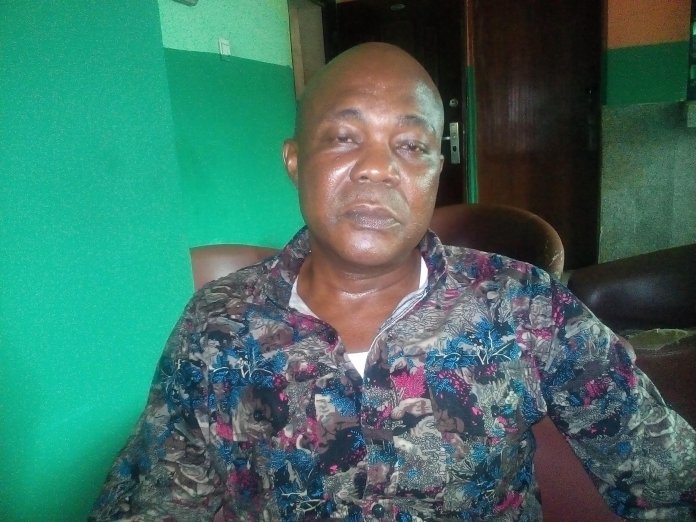 Until his recent sack, Mr. Ernest Nwufoh was the admin officer of Operation Clean and Healthy Anambra Brigade, better known as OCHA Brigade, a position he held from its very inception. Following his alleged recent brutalisation and subsequent sack by the  brigade, David-Chyddy Eleke reports that Nwufoh has appealed to the state government to mediate in the matter

Until June 11, 2019, Mr. Ernest Nwufoh, was the admin officer of Operation Clean and Healthy Anambra (OCHA) Brigade, a state government paramilitary outfit, where he had a glowing career. He had been the admin officer since the inception of the brigade, which is responsible for clean and healthy environment around Anambra State, since in 2015. So nothing at all suggested to him that he would one day be a prey in the hand of his boss, because he has worked with several of them, and each had found him a likeable staff.
His troubles however began without notice in June 2019 when the Anambra State governor announced the appointment of a new Managing Director and Superintendent General for the brigade, in the person of Engr Douglas Okafor. The appointment and swearing in of the new boss led to the exit of the former helmsman, Mr. Pat Obiefuna.
Just as Okafor assumed office and began to make necessary changes in the outfit, including changing officers who worked in several desks, he instructed Nwufoh to take note of the changes, adding that the outfit would from thence not tolerate cases of fraud. Having been the admin officer for a long time, and not willing to be associated with any fraud, Okafor replied that he wasn’t aware if any case of fraud had been going on in the brigade. According to him, that harmless defense was all that was needed to attack him with a lot of venom.

Nwufoh who spoke to journalists after leaving hospital for treatment said, “He started beating me, just like that, until I collapsed. I couldn’t fight him because he is a US trained fighter. He even seized my phone and threatened to throw my body downstairs, if not for OCHA Brigade Officers who rescued me after I collapsed.”

On why such a harmless reply would elicit such attack, Nwufoh said he suspects that the action of the new MD may have been triggered by the fact that he(Nwufoh) did not support him(Okafor) during his quest to head the agency.

He alleged, “I was the Admin Officer of OCHA Brigade, and I worked very harmoniously with my former boss, Superintendent General and MD, Mr Pat Obiefuna. The current MD was a Deputy Superintendent, but he was engaging all forms of manipulation to become the MD, but I did not support him.

“Just a week after he was made the MD and Superintendent General, he called me and said there will now be changes in office, that the brigade would no longer condone fraud, and I asked him if there had been any fraud in the agency, and that was all.”

Nwufoh said that since after the incident, he has been in hospital for treatment, as he sustained a dislocation, a red eye and blood clot from the beating.

“On my return, I went to retrieve my phone which he seized, but was told I had to sign to collect a letter before it could be handed to me, and when I signed and picked up the letter, it turned out he had terminated my appointment. He also deleted a lot of data from my phone.”

“This man just wants to ruin the organisation. He even set up a commission of enquiry to identify staff of the outfit who visited me at the hospital and at home to commiserate with me over my plight, and I heard he has plans to sack them too.
“How can he do this in an organisation we have been nurturing all along, until he was brought in to head it, after his return from the US. Even my colleagues who have been with me since the inception of OCHA Brigade, he wants to victimise them because they came to commiserate with me, is that how to be a leader?”

THISDAY however approached the Public Relations Officer of the brigade, Mr Anthony Agbaefune on the allegations against his boss, but he insisted he does not have the powers to react, saying that his boss would rather speak for himself.

When the MD was contacted on phone, he told THISDAY that he was busy and would only entertain interview on the matter after a week, but on the scheduled day for the interview to get his reactions to the allegations on him, he shocked this reporter. He said, “My friend (the journalist), what is your stake in this matter? Tell the complainant to go to court, and don’t you ever call me about this matter again,” he bellowed, and put off the call.
Not even the explanation by this reporter that it was an act of professionalism in media practice to give him the chance to defend himself, could cause him to listen further.

Meanwhile, Nwufoh has remained in pain and weeping as besides being down in health has also remained jobless and penniless, while his health deteriorates further. “As I speak to you, I am still having pains all over my body, My doctors have recommended I go for another round of x-ray, but I am combining my drugs with herbal massaging.”

Nwufoh who begged the Anambra State governor to intervene in his case, said he knows how hard the agency worked to win him(Obiano), his reelection. He said he had also approached the Secretary to the State Government to complain, but has not been lucky to meet him as each time he went to the office, he was told that the SSG, Prof Solo Chukwulobelu was busy.

“How can my labour for years be terminated without any benefits for no just cause? Please, Obiano and any official of the Anambra State Government who is in charge of the agency must intervene. It is not about me, but if nothing is done, many other people may get the same treatment,” Nwufoh lamented.