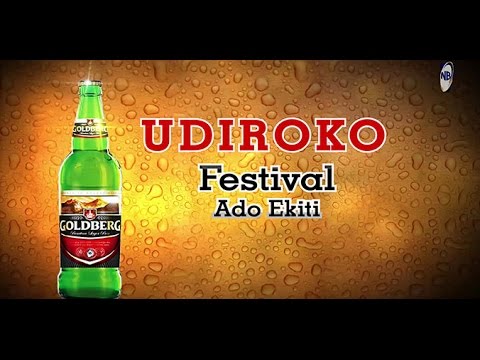 Nigerian Breweries’ Goldberg Lager Beer and La Casera are among the iconic brands that will back 2019 Udiroko Festival, a cultural celebration to showcase the historical, and traditional potential of Ado-Ekiti people as a collective entity.

The decision of Goldberg Lager Beer and La Casera back the festival stems perhaps from having noticed the significance of the festival celebrated annually  in Ado-Ekiti, South West Nigeria.

Udiroko Festiva marks the first day of the year for the Ado-Ekiti people. It is usually a day the people set aside to give thanks to their maker and they also use the opportunity to pray for themselves, as well as the town for their remarkable achievements recorded over the years. The festival was established around 1310 AD during the reign of Oba Awamaro, the first Ewi of the present day Ado-Ekiti.

Ekiti State Government lauded the partners for their support and affirmed that the state government has also decided to partner Ado-Ekiti people and assist them in rebranding the cultural festival.

The Director-General, Ekiti State Council for Arts and Culture, Wale Ojo-Lanre said government is involving Ado-Ekiti indigenes both at home and in the Diaspora to help make the festival become self-sustaining.

“We have noticed the energy and vigour with which the Ewi of Ado-Ekiti and the people of Ado prepare and celebrate Udiroko annually,” said Ojo-Lanre at the World Press Conference held  in Lagos on the forthcoming 2019 Udiroko Festival.

The conference, which was held at Lagos Airport Hotel, Ikeja, recently, attracted well-placed Ado-Ekiti indigenes  including Oba Adeyemo Adejugbe Aladesanmi III, the Ewi of Ado-Ekiti, who are working closely in preparation for the 2019 Udiroko Festival that will be taking place from August 12 to August 20.

The traditional ruler said “The festival has nothing to do with rituals, fetishism and idolism, as it usually starts with Jumat Service on Friday which immediately precedes the first day event of the week-long celebrations. It ends with Church thanksgiving service, and it is usually rotated annually among the various Churches in Ado-Ekiti.” Adding: “It is our hope that from now on, the Udiroko Festival will gain further international recognition that would propel it amidst its cultural peers in other kingdoms and climes.”