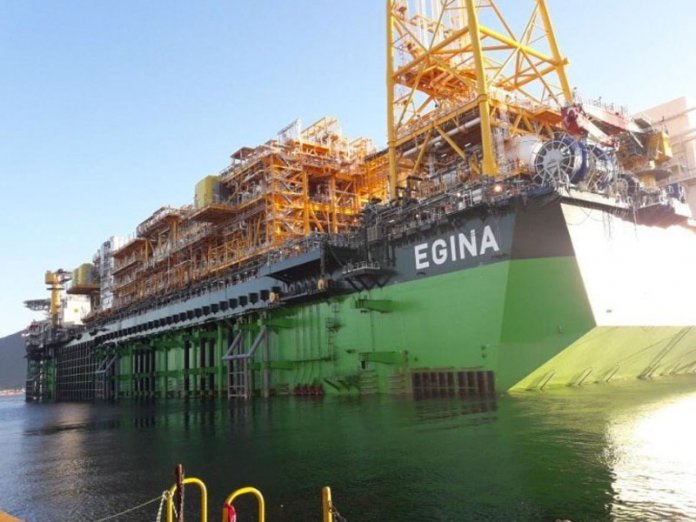 Nigeria’s newest export crude, the medium sweet Egina, is proving popular with European refiners due to its high distillate yields, as output from the Total-operated field nears its full capacity of 208,000 barrels of crude oil per day.

The Egina deepwater field, which was developed at the cost of $16 billion by French oil giant, Total, came on stream late December 2018, providing about10 per cent boost to Nigeria’s daily crude oil production.

Egina has been classified as a medium sweet quality crude oil with a low level of acidity.

When refined, Egina produces a high yield of middle distillates and vacuum distillates, making it attractive to refineries equipped with cracking units in America, Asia or Europe.

The crude has a low sulfur content of 0.165 per cent, according to a report seen by Platts.

Buying interest for the crude has been robust, especially among refiners in France and the Netherlands, while India and Italy have also been consistent customers of the grade, which saw its first exports in February.

Data from Platts cFlow, a trade flow software, showed that refiners in China, Norway, Sri Lanka, the United Kingdom and the United States have also taken a cargo while a cargo, from the August programme, is poised to travel to Brazil.

The report added that despite a slight glut in light sweet and medium grades in the Atlantic Basin, distillate-rich crude grades -especially those in West Africa and the Mediterranean – are finding support from strong distillate refinery margins.

Platts quoted an active trader in the Nigerian crude market as saying Mediterranean refineries were looking at grades such as Egina and Forcados as the “value is in the distillates cut.”

A second source was also quoted as saying “August has been relatively slow for the lighter grades, however, Egina has been going quite well,
Both sources added that in terms of value, Egina has been trading in a range around the level of Nigeria’s Forcados, which is a similar grade.

S&P Global Platts data also indicated that Forcados was assessed at a premium of $1.75 per barrel on Tuesday.
Egina loadings in August and September were expected to average 214,516 barrels per day and 200,000 barrels per day, respectively, according to Platts estimates.

Also production from the field has been stable, which also accounts for its good demand.

Crude from the field is exported via the Egina floating Production, Storage and Offloading vessel (FPSO), built by Samsung Heavy Industries (SHI) of Korea.

The FPSO has an oil processing capacity of 208,000 barrels per day and a storage capacity of 2.3 million barrels.
The deepwater project is the biggest oil and gas investment in Nigeria.