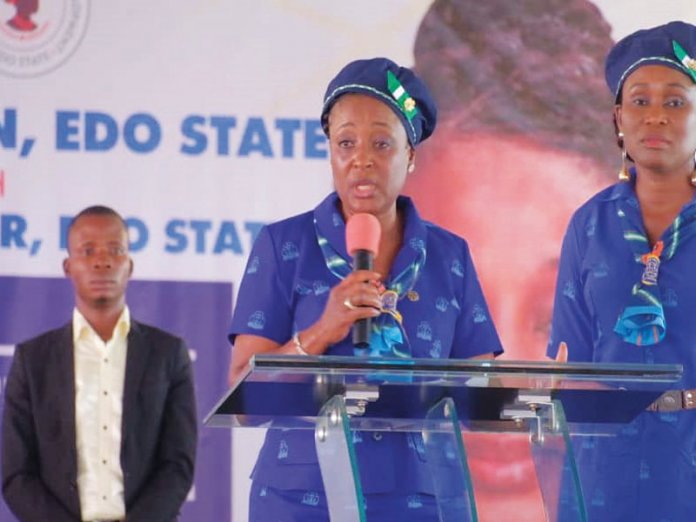 The First Lady of Edo State, Mrs Betsy Obaseki has promised that alongside her husband, Governor Godwin Obaseki, they have resolved to revive all voluntary bodies in the state to tackle the menace of human trafficking.

Obaseki who said this in Benin City when she was decorated as the patron of the Nigeria Girls Guide Association, blamed the death of voluntary association in the state and other notable institutions for the rising cases of irregular migration and human trafficking in the state over the years.

The first lady while inaugurating the wives of the 18 Local Government Chairmen in the state as the matrons of the Nigerian Girls Guide Association, also inaugurated serving female political office holders in the state as members of the association.

She said they are being co-opted in their capacity first as women, secondly as mothers and lastly based on the positions that they occupy.

She added: “that is why you are all meant to go and mentor all the women that you come across in life and bring them into this movement because the more people we get who know the tenets of this movement, the more cleansed and sanitised our society will be.

“Consequently, the more young girls we will be delivering from destruction, the more good homes and better marriages we will have and consequently a better society.”

The Commissioner of the Nigerian Girls Guide Association, Mrs Enebeli Ukpor Mary said the guild is concerned with the development of the moral values of the girl-child, character molding and skills acquisition.

The Deputy Chief Commissioner of the Nigerian Girls Guide Association Edo State, Mrs Rhoda Thomas, who spoke on leadership asked members of the guild to imbibe leadership qualities of being sensitive, focused and passionate about their cause.