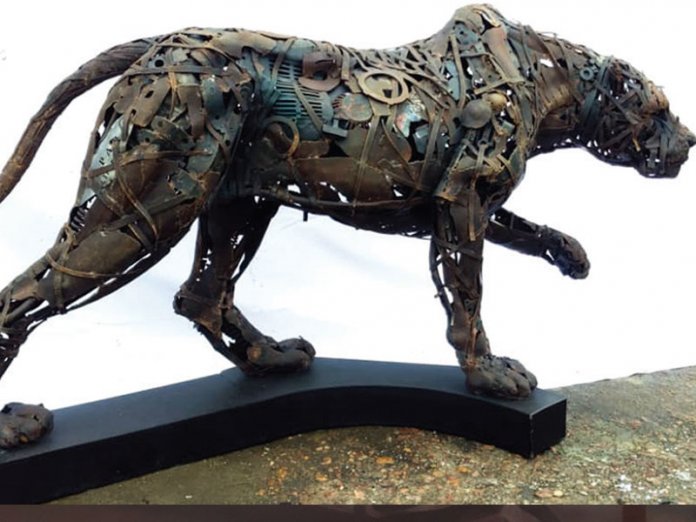 Ugo Aliogo profiles a sculptor prodigy who has found expression for himself using clay, mild steel and metal materials

I heard of Steve Ekpensi in a conversation with my brother. He didn’t really give much detail about his personality and what he stood for. The vivid description I could recall was that Ekpensi is an artiste and an interior designer with a knack for excellence and aesthetic. The details and the physical appearance of Ekpensi was of some sort, contradictory, judging from his unassuming personality.

He had a deep self-analysis with a relentless need for success. He is taciturn and reserved, but with a heart cut open to absorb patches of creativity. Among his contemporaries, he has created a legendary personality. He has defied the odds and broken barriers in the desire to raise the bars in sculpting. Ekpensi hails from Delta State, the Ika extraction precisely. His primary and secondary education did not give him the necessary formation to build a budding career in art. However, destiny took its course in his life.

“I grew up to see myself as an artist without the foreknowledge of anything that has to do with art. In primary school, I had no opportunity to study art as a subject; but was doing it all on my own. I did drawings which I exhibited to my classmates during recess and in appreciation I receive sticks of colour chalk. This was inspiring and I got happy each time I get more views,” noted Ekpensi who sat crossed legged on the cold floor of his sitting room.

He continued his skill development while pursuing secondary education at St. Charles’s College, Abavo, Ika South Local Government Area, despite not having an art teacher. Growing up in the sleepy village of Abavo, didn’t hold much hope and promise for Ekpensi and his dream of building a future in art.

“Art was not seen as a subject to be taken seriously as presumed then by the school management. As a result I could not enroll for visual art at the senior secondary examination conducted by West African Examination Council in 1997. Rather I enrolled for the commercial examination. In St. Charles College, I did some drawings on the walls of our hall which stands till date.

“With the burning desire to pursue the art profession, I sought admission in another school; Happy International Group of schools and enrolled visual art at the final year examination. On release of the result, I had a distinction and got other papers in credits. This gave me eligibility for a tertiary institution.”

In 2003, he secured admission into Auchi Polytechnic to study painting and general art. The polytechnic presented him the opportunity to learn, develop his talent further and standout. He devoted time to hone his skills under the tutelage of some of his lecturers. Due to the time and dedication he invested in developing his talent back home, he did all his class assignments with relative ease. Where others saw despair, tediousness and hopelessness in general art, he saw opportunities.

As he progressed, he broke bounds in the course of study, and this gave him fame and popularity, with some lecturers and students wanting to associate with him.

According to him, “For every journey, they say has a destination. I graduated as overall best student in both Ordinary National Diploma (OND) and Higher National Diploma (HND) with distinction in general art and sculpture. Art profession is so demanding I didn’t relax, despite the challenges that came; I was always ahead of the game. It requires a lot of money to buy materials to do assignments, but I thank God because I got small commissions to add up to the money my parents had given me for my up keep.

“In polytechnics especially in fine art department, you study general arts; this cut across all spheres of visual arts, painting, textile, graphics, ceramics and sculpture. I was good in these areas. The only area I could not explore very well was in sculpture. It’s easier for a professional sculptor to paint very well, but it is not very easy for a painter to sculpt very well. I think I had difficulties in sculpture and there were a lot for me to learn so I opted for sculpture. I opted for sculpture because I love forms, contours and textures and these elements are paramount in sculpture.

“The journey was not rosy, I felt like quitting art after I had my HND programme in sculpture department from Federal Polytechnic, Auchi in 2008. But along the line, I realised that if I don’t practice as a professional artist, it would be a waste of God’s given talent.”

At the early stage of his studies in Auchi Polytechnic, the works of Michael Angelo began to make lasting impression in his heart. For the first time in his life, he had contact with a different world especially with the quality of sculptures he saw and how good they were. Recreating these types of designs became a challenge for him, therefore he gave himself to deep learning in order to understand the concept behind those designs. On the home front, he drew inspiration from the works of Ben Enwonwu’s works.

According to him, “I have been involved in sculpture professionally for a decade now. It has not been easy. I have worked for people without any payment, sometimes clients don’t pay the initial agreed amount and there is practically nothing you can do about it.

“On the sweet side, every artist begins to enjoy the dividends of his hard work when he or she is able to define him/her. Defining oneself is; choosing a path and creating identity for him in you work. Art is like handwriting. Two people can’t have exact handwritings except one is a copy. Every practicing artist needs authenticity.

“Sculptors in Nigeria are making impact and huge progress. This is a huge leap from what it used to be. Let us look at the music industry as our case study. In the late 80s, Nigerian musicians were just a handful. In contrast to what it is now, we are now measuring up with the foreign artists. Nigeria artists partner foreign artists in art exhibitions and other collaborative activities. This tells you how much the industry has evolved.

“Technology has played a major role in revolutionising the art sector. Today, artists can do their works, upload on social media, and it will receive interests from the international communities. It has actually changed the narrative and it has boosted the pace of improvisation.

“Invention of diverse modern power and non-power tools has helped various metal sculptors develop different ways of producing metal sculptures. One of the ways which the artists get inspiration in this 21st century is through the internet. You can read ebooks, view works of other artists from different continents and get inspired.

“My area of specialty is welded metal sculpture from waste which is called up cycling. My up cycled art is quite different from every other up cycling artists that use metal. At the dump sites I usually go for flat alloys ranging from discarded auto parts, discarded kitchen utensils, discarded electrical and electronic parts, and paint cans and discarded metal sheets. I slice the sheets into definite and indefinite shapes to create my Sculptures. This is aimed at not just creating a sculptural piece but at the same time saving the ecosystem from ruins, thereby turning waste to wealth.

“Most works of mine are actually inspired by my environment, culture and norm of my people. I have done some monumental outdoor sculptures which I will not mention for certain reasons. I have done a lot of personal works, both in human and animal figures, one of which I titled in my dialect “oken anu wèeson aza efan”( 250cm long x 150cm high) which means ‘human beings affiliate with reputable animals.’ Man shares names with animals like lion, elephant, tiger and others. This is simply because of their virtuosity in character.

“The elephant is an all-conquering animal; the lion is daring, king of the jungle and the tortoise is wisdom endowed. I have another body of work called; ‘Ugon’ the Eagle (240cm tall). An eagle has so many characteristics, one of such is that eagle is the only animal that sticks to a partner for life till the partner dies.

“I only have two galleries that collect my works for now, apart from individual collectors. Collection of art works are in two ways, it is either the artist give out his works on outright sales or sales on return. Presently I am a member of Universal Studios of Art National Theatre Iganmu, Lagos State and I also operate from there.”

In underscoring the place of art education in Nigeria, he remarked that art empowers individuals with creative skills that widen the base of participation in the society, create jobs, self-reliance, and identity, communicated by creating, recording and transferring ideas.

He buttressed the point that it builds perpetuate social, religious, political and economic stability, adding that on the basis of that, art should be given premium attention like other subjects in the school curriculum, “it should reflect a study of all ages, as this is vital in the development of individuals”.

Ekpensi espoused that the society should pay more attention to issues outside their own profession to learn one or two things.

His displeasure with the profession is that it is not appreciated enough in Nigeria as much as European and American counterparts do, “a lot of us still dwell in the ignorance that evil spirit lives in sculptural pieces”.

He is however opined that there is a light at the end of the tunnel for the profession especially with the springing up of many art galleries in the country, “secondly, art is not just a decorative piece, its luxury. Sometimes people look for what to invest their money on, they buy art pieces”.